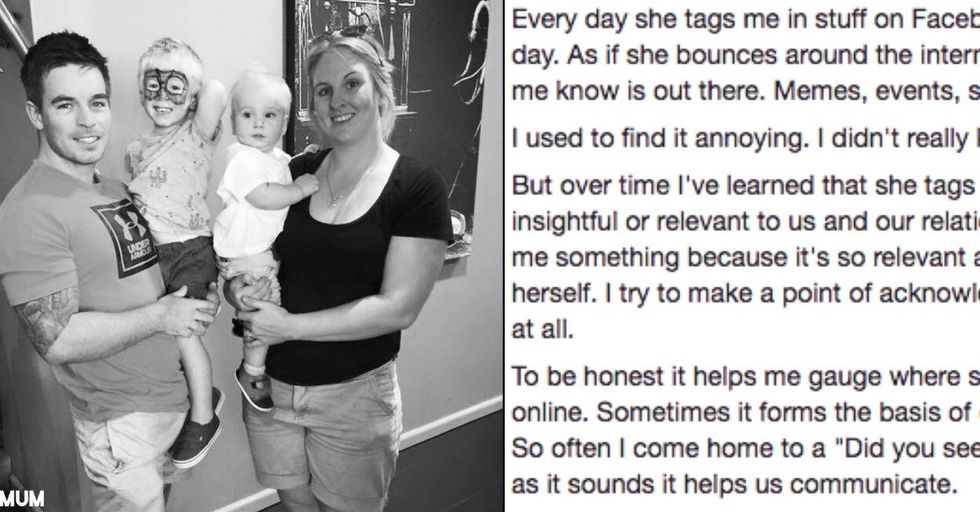 I don't care who you are. There's nothing more equal parts terrifying and annoying than getting randomly tagged in things all the time on Facebook. Is it a picture from decades ago when you had an unhealthy obsession with neon and crimped hair? A 2,000-word essay a friend "saw and thought of you immediately?"

We've all been there, but what if it's your spouse that's tagging you on Facebook all the time?

On the surface, Brad Kearns seems like your average father-of-two.

Except Brad runs a Facebook page called DaDMuM where he documents his adventures as a parent.

Even DaDMuM admits he used to get annoyed when his wife would tag him on Facebook though.

But here's why you shouldn't.

"Every day she tags me in stuff on Facebook. Every day. Like several times a day. As if she bounces around the internet just looking for random shit to let me know is out there. Memes, events, stories etc. I used to find it annoying. I didn't really know why half of it was relevant. But over time I've learned that she tags me in shit because it's either funny, insightful or relevant to us and our relationship. Sometimes it helps her tell me something because it's so relevant and she couldn't have said it better herself. I try to make a point of acknowledging it. It doesn't take any effort at all. To be honest it helps me gauge where she's at and what she's looking at online. Sometimes it forms the basis of our conversations when I get home. So often I come home to a 'Did you see that thing I tagged you in?' As silly as it sounds it helps us communicate."

"Women tag men in basically everything I ever post," he continued. "I always see the same reply of 'I ain't reading that' or 'too long'.... that's it...."

"The conversation goes no further. Whatever message she was trying to send him was rejected because of sheer arrogance and inability to take a few f*cking seconds to read something that was probably important to how she was feeling. Read the post. Just fucking read it. If she tagged you in it, she wants you to look at it. If you were at the park and she said 'hey look at that' would you ignore it? Would you make a snide remark about how much effort it will take you to see it? I think not. Show her you love her. Let her know you care. Read the f*cking post! #readthef*ckingpost"

How did people reply?

Did they actually read it? Well...

People did read his post to the tune of more than 4,400 comments, many from wives who were tagging their husbands they knew wouldn't read the post.

Or, at least thought they wouldn't.

Others felt that his post hit on exactly how they feel to be on that side of things.

Sometimes when you tag someone in a photo or a meme, it means something. So picking up on those hints is an important thing to do.

Some husbands are at least trying now, thanks to DaDMuM's post.

Or they're at least pretending to try, which is more than they were doing before.

Hopefully they did read it, because it seems to already be opening the lines of communication for those who are taking it to heart.

It's really as simple as everyone wants to know that they're being heard.

Let them know they're being heard.

“Show her you love her. Let her know you care. Read the f*cking post!" And funnily enough, DaDMuM's wife read his post and had a hilarious response.

Mrs. DaDMuM is a savage.

His page is full of wonderful stories about his relationship and parenting though.

In case you want to go on a feel trip.

We can all take a page or two out of Brad's book.

Just taking a second or two out of your day to listen to your significant other or read their memes can have a dramatically positive impact on your relationship.