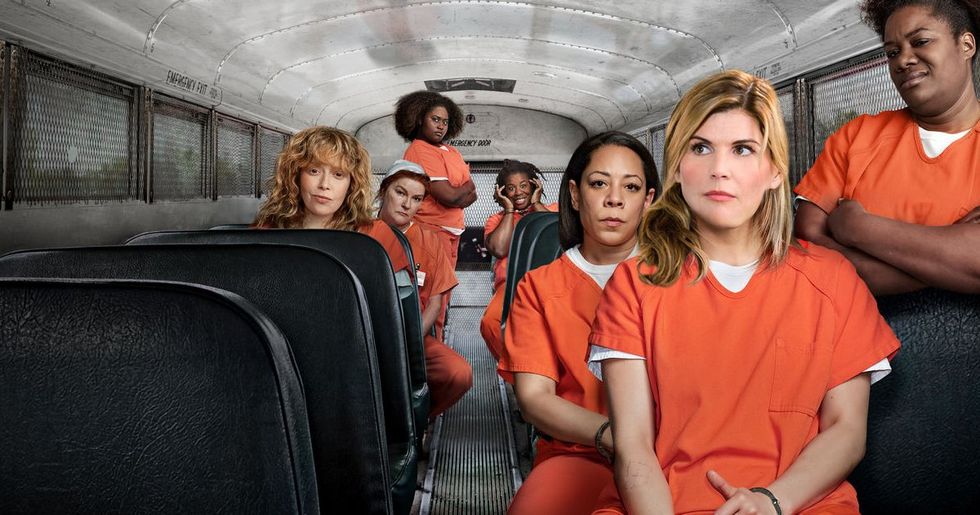 This is How Much Prison Time Lori Loughlin Is Actually Facing

Lori Loughlin, famous for Full House and buying her daughter's way into USC, pled not guilty to charges of mail fraud and money laundering. Both of those charges carry hefty maximum sentences: twenty years apiece. That means that if convicted of both charges, she and her husband could serve forty years.

Everything about this scandal reeks of privilege: the money spent to get their kids into a school notorious for being a school for rich kids, the fact that her daughter is a YouTube influencer (crazy year for YouTube Beauty), and the fact that her husband created the Mossimo brand for Target and is worth $80 million.

Lori Loughlin is not the first famous person to face huge charges, and she won't be the last. Read on to learn about this insane scandal and some other celebrities who faced the law and the law won.

Lori "Aunt Becky" Loughlin was arrested in March 2019 for her involvement in a college admissions scam.

Using a third-party service, several parents paid to have their kids admitted to elite colleges. This service could get you better SAT scores or a spot on an athletic team as a "recruit." Millions of dollars were spent on these kids' admissions.

Lori Loughlin isn't making that much on Fuller House. Her husband created the Mossimo brand found at Target. He's worth $80 million.

Her YouTube channel focuses on beauty and shopping hauls. At the end of last year, she announced that she and Sephora were launching a makeup line collaboration. In her words, "a dream."

Other famous people were involved in the college admissions scandal, including Felicity Huffman.

Felicity Huffman and her husband William H. Macy paid to help their kids as well. They paid $15,000 to doctor their child's SAT test.

Her famous shows are a little "on the nose." Felicity took the plea deal offered by the state to reduce her sentence.

In a statement to the court, she said she was "ashamed" of what she did and offered an apology to students who worked hard to earn their spots in their colleges and to their parents who make honest sacrifices for their children.

She and her husband decided to plead innocent and not take the deal offered by the state. She did spend more money than Felicity Huffman so maybe the deal wasn't as appealing, but still, this is a bold move.

She insists that she committed no crime.

She believes that they can beat this charge in court and refused to take a plea that included jail time. Ok, Becky.

After denying the initial plea deal, the state added another charge.

They were initially charged with mail fraud. After They plead "not guilty," the state added an additional charge: money laundering.

Even after the new charges, they're sticking with an innocent plea.

After these new charges were added, Lori Loughlin and her husband stuck by their "not guilty" plea. According to People Magazine, Lori felt she had "no choice."

Her behavior in the courtroom has not helped her case.

Lori has expressed no remorse and at times has seemed flippant in the courtroom. Judges and juries don't look kindly upon that attitude.

But, maybe this will take the smile off her face.

Each one of her charges comes with a maximum sentence of twenty years. In rejecting her initial deal, she's now facing up to twice the punishment.

She could be sentenced to up to 40 years in prison.

Combining her two charges, mail fraud and money laundering, Aunt Becky and Mr. Target could receive a maximum sentence of forty years for spending half a million dollars to get their daughters into USC.

But, that will largely depend on what the jury recommends after the trial.

And then, the judge will chime in. In the early 90s, a young black girl was killed in a convenient store. The jury recommended jail time but the judge only gave the killer probation and a fine.

Earlier this year, Paul Manafort received only a total of 7 1/2 years

Paul Manafort committed almost too many crimes to count and only got 7 1/2 years, far less than the maximum sentencing guidelines would have allowed.

But, many years ago Paris Hilton received 45 days.

Paris Hilton begged the court to not make an example of her but she was saddled with close to the maximum sentence for her probation violation. However, she only served half of her term.

Mark Wahlberg was sentenced to two years for assault but only served 45 days.

When Mark Wahlberg was fifteen, he beat up a few kids, calling them the n-word. Then a few years later, beat up a Vietnamese man while saying racial epithets. He was charged with attempted murder but plead to assault. He still carries a felony record.

In 1999, Robert Downey, Jr. was sentenced to three years but only served one.

Through the back half of the '90s, Iron Man was arrested for drug possession and weapons possession multiple times. He didn't clean up his act until the '00s.

In 1978, Tim Allen was arrested with 1 1/2 pounds of cocaine. He was facing life imprisonment but plead down to three to seven years. He was paroled after two years and four months. This was before the "war on drugs" and mandatory minimums.

In 2004, Martha Stewart was convicted for insider trading.

She was sentenced to 5 months in prison followed by two years of house arrest and a substantial fine. She's seen a resurgence in her popularity recently through her friendship with Snoop Dogg. See? There are bright spots in 2019.

No matter how this shakes out, Lori Loughlin's life is irrevocably changed.

Her brand has always been one of Nice Mom, as evidenced by all of these photos with that mom hair cut. That's no longer something she can pretend to be.

She was written out of the last season of Fuller House.

Lori Loughlin has been a part of the cast since the beginning in the 90s. But, she will not be a part of the 5th and final season of the rebooted Fuller House.

Lori has worked on a number of Hallmark shows and movies, but after these charges came forward, she was dropped from everything.

Her daughter, Olivia Jade, denies knowing that her parents paid for her admission.

Olivia claims she had nothing to do with her parents' scheme. She even said on her different outlets that she hated college and didn't want to go.

After this scandal broke, Sephora ended their collaboration with Olivia Jade. Princess Polly also severed their relationship. However, her follower count has only increased even though she hasn't released new content since early March.

And, her boyfriend broke up with her.

Olivia and her parents' relationship is a bit rocky at the moment, so she had been staying with her boyfriend in Malibu. But, reports have come out that he broke up with her.

Her sister Isabella also benefitted from her parents.

Allegedly, Lori and Mossimo bought admittance for their other daughter Isabella. She too was recruited for the crew team but was never on the roster.

But, her boyfriend broke up with her too.

She doesn't have the same social following (she temporarily deleted her Instagram in the wake of the scandal) as her sister, but she's suffering consequences. Her boyfriend has also dumped her.

This is a scandal that will stick to this family for years.

She might not end up serving a 40-year sentence, but she and her family will suffer financial consequences for a long time. Time will tell if the internet will welcome back Olivia Jade and her sister. And, I guess, if Mel Gibson is still allowed to work, maybe Lori can claw her way back to Hallmark? We'll see.