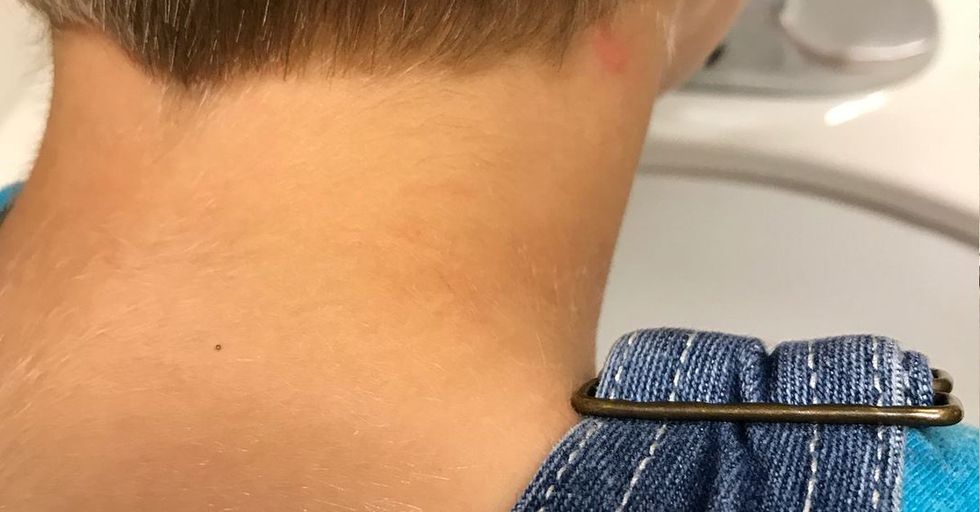 Spring has sprung (for the most part, anyway). That means it's bug season again, and time to start keeping a lookout for pests.

Most of us already know about ticks. They're those tiny parasites that'll latch onto you if they get the chance. And blood-sucking isn't even the worst of them; ticks also carry a number of diseases. So it's important to watch yourself when you venture into the great outdoors. Sure, we already do that--tick checks are definitely routine whenever I go for a hike--but ticks are easy to miss.

One mom recently shared a story on Facebook that will give you the shivers! It's crazy how small and hard-to-spot these parasites can be. So keep reading to get a better idea of what we're up against, and how to handle them!

Ticks are pretty much the worst.

They're gross, they're clingy, they drink your blood, and they spread Lyme disease. Keep them away!

This mom's story will definitely give you an immediate urge to run a tick check; it's an unnerving one!

Turner's son had been playing in leaves at his grandparents' home. When he returned, she made a hair-raising discovery.

Not only did Turner find ticks burrowed on her son's neck; the ticks themselves were practically microscopic.

There's a reason you have to be thorough.

Ticks can be so small they're almost impossible to spot. And Turner found 7! "Would you have spotted these ticks?" she wrote. "My son had 7 on him! To the unsuspecting eye, they just appear as specks of dirt or freckles."

Take a really, really close look. You'll be able to spot the ticks and their little legs if you squint.

It got some serious attention.

As of today, Turner's post has racked up over 14,000 shares and hundreds of comments. Tons of people are sharing their own scary experiences with ticks.

Deer ticks can be quite the menace.

A couple of years ago I got very sick broke out in rash went to the Dr and was hospitalized had several deer ticks on me you couldn’t even see them. -Mona Newsome

It's hard to even recognize a tick bite.

That’s how tiny a deer tick is. The only reason I spotted mine, on front and had that red/white ring around it. They look like a tiny mole. -LouAva Disponett

At least you can usually tell when you've been bitten.

If you ever get these on you and don't notice them within a day you'll be itching and broke out like you've been in poison ivy. I've gotten into nests of these in the garden and gotten as many as 150 at a time off me. They'd be like a small army going up my leg and very hard to get off. Duct tape works the best. Just press down and pull them off. After at least a thousand of these tiny tick bites in the last few years, I still tested negative for Lyme disease. Still felt like I was going to itch to death though. They hatch out on plants and if you touch it they go everywhere. They're awful little seed ticks. -Cathy Saffles

There's a reason they're so hard to spot.

The ticks only get bigger and most visible when they've gotten some food (i.e., your blood) in them. Gross, but true.

And here's your motivation to run those checks:

When you're bitten by a tick, you're at risk of catching Lyme disease. And according to the CDC, roughly 30,000 cases of Lyme disease are reported every year.

So it's also important to know the identifying symptoms of Lyme disease: fatigue, fever, headache, and rashes.

If you think you might have Lyme disease, get treatment.

If it goes untreated, the Lyme disease escalates. It can begin to affect the joints, heart, and nervous system.

So, how do we avoid Lyme disease?

Well, the easiest answer is: "avoid ticks." To that end, there's plenty you can do to ward off the little buggers.

Here are a few examples:

Insect repellent: it's your BFF in rural areas. Make sure you've got Environmental Protection Agency-registered insect repellent when you're outdoors.

Me, too. But ticks can be anywhere on hiking trails, so do your best to stay in the center of trails, and steer clear of areas with tall grass.

Tall grass is the enemy here.

And the tick's natural habitat. Dress appropriately when you can! I know it gets hot, but if you're able to stand pants and thick socks, those are also good for keeping ticks out.

And then, the inspection.

After you get back from your excursion in nature, it's time for the tick check. There are a number of particular places you should check!

Ticks have their favorite spots.

That includes under your arms, in your belly button and ears, in your hair, around your waist, and between your legs.

I'm getting itchy just thinking about it.

Ticks aren't a fun subject to discuss, but it's important to know the proper ways to protect yourself from them!

Watch more than just yourself.

If you've got pets, they'll also need some looking after. When they come inside, it's good to give the animal a tick check too.

So know where to look!

Make sure you've examined the areas around their ears, their tail, eyelids, plus under the legs and collar. Even check between their little toes!

What do you do if you actually find a tick? Well, first off, no need to panic. Just use the following tactics to remove it.

You can grab a cotton ball and soak it in warm, soapy water. Cover the patch of skin with the tick, and hold the cotton ball there. When you take the ball away, the tick should peel off with it.

If not, go for the tweezers.

You might need to use a little more force. So grab your tweezers, get a grip on the tick (yuck), and pull that sucker off. You can always bring it to a physician and see if it's carrying Lyme disease, too.

In Turner's case, she knew what to look for.

"I have an eye for them since my husband use to do brush cutting work and I did regular tick checks on him," she told ScaryMommy. "Even without him doing that line of work anymore we still get ticks every year."

And because it's spring weather now, we've all got to keep an eye out.

"It’s not too cold, and it’s not too dry, and it’s really not too wet, because we’ve been experiencing this drizzly weather, this overcast weather," says research associate Susan Elias.

But we can still hope for unfavorable conditions.

"When they come up and they’re experiencing that high heat of summertime, it can drive them out. It can kill them," Elias added.

Maybe we'll get that tick-killing heatwave soon. In the meantime, remain vigilant. You can still go and enjoy nature; just make sure nature doesn't bite back! Share this post with your outdoorsy friends, and make sure everyone knows how to look out for themselves this time of year!