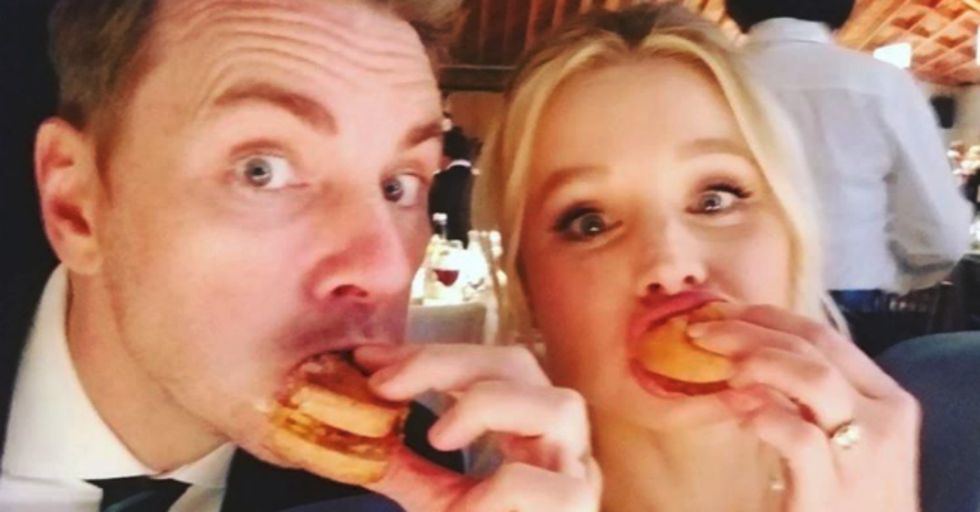 If someone were to ask who which celeb couple you'd most want to hang out with, it'd be hard not to immediately yell "KRISTEN BELL AND DAX SHEPARD!" They've basically been everyone's favorite pair since their epic "Africa" music video. Not to mention that time Shepard filmed Bell having her sloth meltdown.

So, yes, they are absolutely couple goals and we can all agree on that. But they're also totally #parentgoals, because two people this cool have to be great at everything, obviously.

Even though they're both famous, they still have to deal with things all parents have to face.

For instance, kiddie meltdowns, back-talk, and messy rooms. Despite the fact that these two live a high-profile life, at home, they're still just mom and dad.

As a parent, there comes a time when you just hit a wall and feel like you've reached your breaking point. Bell is no stranger to this.

In a recent interview with US Weekly, Bell opened up about her and Shepard's parenting tactics. “We tag team. We switch kids all the time," Bell said regarding her two daughters, Lincoln (4), and Delta (2).

While parenthood can obviously be rewarding, raising tiny humans comes with tons and tons of stress.

And take it from Bell, she totally gets that stress. “If I’m talking to the 2-and-a-half-year-old and I’m done, I’ll just be like, ‘We’ve got to switch. I don’t want to talk to this kid anymore.’"

Bell and Shepard have found balance with one another when it comes to raising their little girls.

And they realize that it's not ever going to be perfect, because that's an unrealistic standard. "It’s not about perfection, but it is about being thoughtful and not reactive. So in order to not be reactive, we switch kids a lot."

So how does Bell deal with messy rooms and those moments when she just wants to freak out?

She thinks before she reacts. “It feels awful when your kids ruin your house. It feels really, really awful," Bell told US Weekly. “In those moments I go, ‘Am I going to like myself more after calming cleaning this up and making them help me?" What she does helps put things in perspective...

By taking a breath and really thinking about how she chooses to react, she's able to figure out what's going to work.

Sure, it'd be easier to just freak out and yell and get super stressed about how your children destroyed your home. But Bell finds it's helpful to just take a moment. "...Am I going to like myself more after I blow up at them because they dumped — or accidentally dumped — a big bucket of beads? Which outcome am I going to be happier with?’"

No matter whether you're walking a red carpet or not, there are some things that are absolutely universal in the world of parenting.

It doesn't matter that Bell and Shepard are celebs. They're just like any other couple figuring out the best way to raise their children in 2017.

Bell and Shepard have been together for nine years, which is no easy feat in Hollywood.

Everybody knows that nine years in Hollywood is the equivalent of 100 years in the real world. Not only do Bell and Shepard have to figure out parenting skills, but they also need to figure out their own couple skills.

Part of that is communication.

“There’s no trick  . . .  other than having really good communication with your partner and being able to say, ‘I’m reaching capacity. So I need to go take a hike today,’ or ‘I need to have lunch with a girlfriend.'" Prioritizing your own needs is only going to make you a better partner and a better parent.

And never underestimate the power of a good night's sleep!

Now this might just be the key to it all: sleep. Bell believes rest fuels everything, including patience. We can't help but agree on that one. We also can't help but love Bell and Shepard more than we thought was even possible. What absolute dreams.