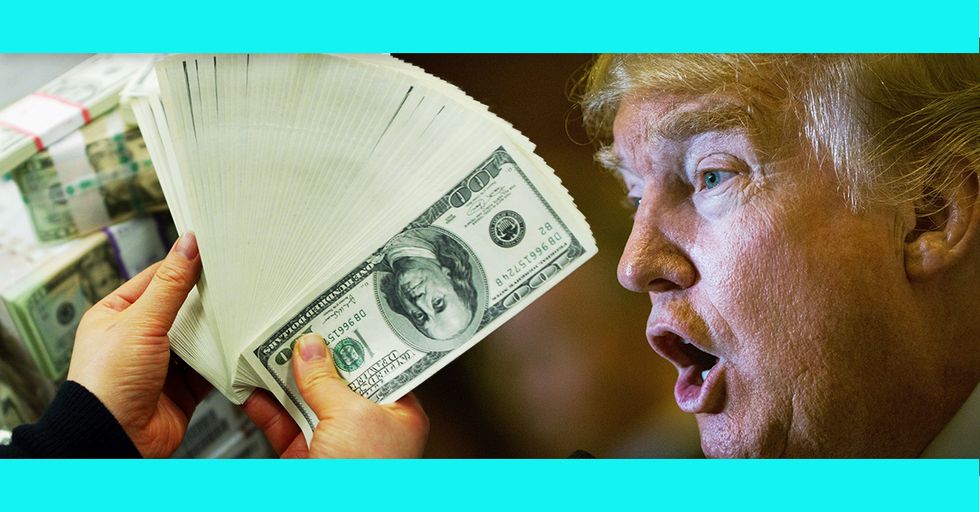 Taxes are not a sexy topic. No one ever goes up to another person and whispers softly in their ear, "ooh, girl, let me tell you about how to be fiscally responsible and use your deductions to maximum advantage, so we can work on that sexy, sexy retirement package while smoothing out your NRA."

If you zoned out halfway through that sentence, that's the point. If you actually understood that sentence and was like – wait, that literally makes no sense – also the point.

We're not economically savvy people by any stretch of the imagination, but in previous weeks, we've found ourselves paying attention to taxes, and news about taxes, more and more each day.
After all, the Trump tax bill – proper name, the Tax Cuts and Jobs Act – has been the subject of much discussion in the past few months.

Treasury Secretary Steven Mnuchin said that the Republican-sponsored tax-code overhaul would pay for itself by, ostensibly by fostering larger economic growth. "Not only will this tax plan pay for itself, but it will pay down debt," Mnuchin said in September.
Numerous economists, publications, and other intellectually-minded organizations have poked holes in this supposition. First of all, the new tax code, which is the largest overhaul the United States has seen in decades, costs $1.5 trillion.
Even more worrying, it's not the " incredible Christmas gift for hard-working Americans" Trump crowed about after the bill passed 51 to 48 this Wednesday. In fact, it actually hurts the working class. As The Balance explains:

Among individuals, it would help higher income families the most. Everyone gets a tax cut in 2019. But in 2021, taxes will increase on those making $30,000 or less. The lower tax rate won't make up for the deductions and credits they lose. By 2023, costs will rise on everyone who makes less than $40,000 a year.

But how much exactly does Trump stand to make?

Well, the precise number is unclear. Trump has repeatedly refused to show his tax returns, claiming, among other shameful and horribly uncomfortable lies, that they're tied up because of a tax audit.
In fact, this is not the only financially-related lie Trump has made. Trump has often claimed that he has a fortune "in excess of TEN BILLION DOLLARS." However, numerous publications, including Fortune have cast doubt on this claim.
"Trump’s revenues are still not big enough, by a long shot, to backup the claim that his net worth is anywhere near that 'in excess of $10 billion,'" Fortune wryly quipped.
In fact, Forbes took a deep dive on the matter and examined all of Trump's holdings including his real estate, brands, golf clubs and resorts, etc., and came up with a fairly conservative $3.1, which, while much better than the claims that he is a mere millionaire, is far short of the "excess of TEN BILLION DOLLARS" Trump claims.
All this is important because it provides background to the claims by leading Washington thinktank, the Center for American Progress (CAP), that the changes to business rules will save Trump "roughly $11m to $15m per year."
In fact, the new tax code helps not only Donald Trump, but also his cabinet, as well as the most senior members of his team, who are all at the upper echelons of the tax brackets.
Trump's Cabinet is worth a reported $14 billion, with the poorest person in the upper echelons, Attorney General Jeff Sessions, being worth a reported $7.5 million.  They stand to gain a lot from this tax code, particularly through the estate tax, which  taxes the "transfer of an estate of a deceased person."

It’s not just Corker. Dozens of lawmakers (and President Trump) stand to reap a tax windfall thanks to a loophole i… https://t.co/mzlFpHCss6
— Kyle Griffin (@Kyle Griffin)1513866905.0

The Cabinet, which includes "Wilbur Ross, the commerce secretary; Linda McMahon, administrator of the Small Business Administration; Betsy DeVos, the education secretary; Steven Mnuchin, the treasury secretary; and Rex Tillerson, the secretary of state," will benefit up to $4.5m from changes to the estate tax.
They're not the only ones who would save. The changes would save Trump's heirs $4.5m. Not only that, up to $22.4 million of Jared and Ivanka's assets would be protected from tax, and Jared, personally, would save  $5m to $12m.

It's just like they say, when oligarchs who fill the swamp instead of draining it make evil tax revisions to make themselves richer, they go big or they go bigger, but they certainly don't go home.