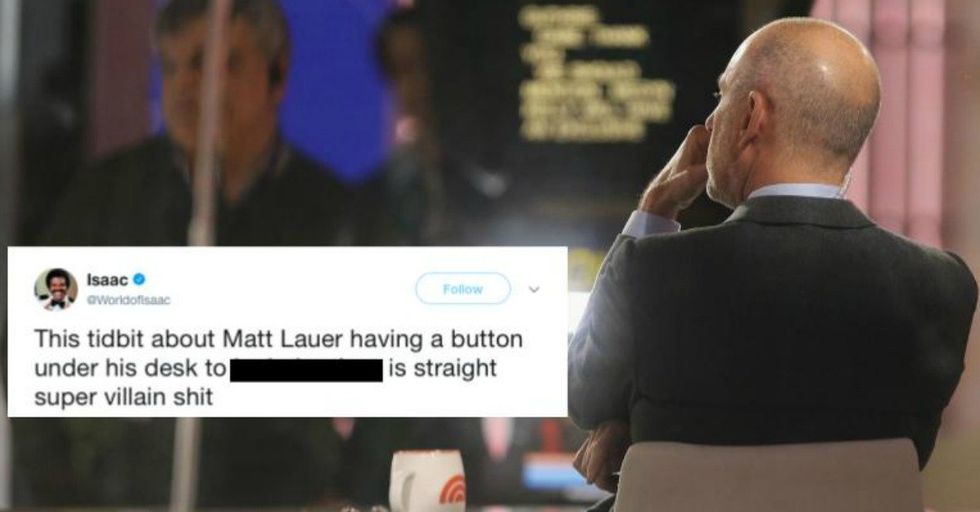 On Wednesday morning, news emerged that longtime Today show host Matt Lauer had been fired from NBC for sexual impropriety. The news came as a shock to Lauer's colleagues, who were only informed about the decision mere moments before they went on air. NBC News Chairman Andy Lack put out a statement citing this as the first complaint about Lauer's behavior in over 20 years.

At the same time, however, he acknowledged it was probably not the last: “We were also presented with reason to believe that this may not have been an isolated incident,” Lack said.

How he and the rest of the NBC brass could not have seen it coming is a bit of a mystery.

Matt Lauer has had years and years of documented bad behavior.

While not necessarily of the overtly sexual kind, Lauer has long been known for being a massive bully. He famously orchestrated Ann Curry's dismissal from NBC, and childishly called the plan "Operation Bambi," because getting rid of Curry would be like "killing Bambi."

There's also the matter of the way he treated Hillary Clinton during the 2016 elections.

During a presidential forum, he questioned her fitness for office while giving then-presidential candidate Donald Trump soft, easy questions. As Clinton later wrote in her memoir What Happened, “Lauer had turned what should have been a serious discussion into a pointless ambush. What a waste of time."

There was also the matter of the way he treated his female co-stars, and even female celebs like Anne Hathaway – to whom he famously quipped, after she'd suffered a wardrobe malfunction – “Good morning. Nice to see you. Seen a lot of you lately."

If this wink wink nudge nudge barely-hidden misogyny was part and parcel of Lauer's style, there was another part of him that was much worse. He was, according to several NBC employees who spoke to Variety as part of a months-long investigation, an avowed serial predator. Or, in the words of one unnamed producer, "He was just really cruel."

Lauer had a pattern of harassment which was known at NBC and assiduously hidden by his handlers.

Matt Lauer gave his female colleague a sex toy as a present and then proceeded to tell her how he wanted to use it… https://t.co/txxnbpbgWL
— Noxeema Jackson (@Noxeema Jackson)1511988116.0

He once gave a sex toy to a colleague with a note detailing how he wanted to use it on her. The colleague, understandably, was "mortified." Or how about all the times he forced coworkers to engage in the game "f—, marry, kill," just so he could identify the female cohosts he'd like to sleep with.

If these incidents – which are relatively minor considered to the other things he did – seem outrageous, they weren't regarded as such at NBC.

In fact, the company reportedly had an old boys club culture so severe, it was instrumental in ensuring that several of its most talented women – Ann Curry among them – were driven away. As Brian Stelter of the New York Times described:

[Ann] Curry felt that the boys’ club atmosphere behind the scenes at “Today" undermined her from the start, and she told friends that her final months were a form of professional torture. The growing indifference of Matt Lauer, her co-host, had hurt the most, but there was also just a general meanness on set. At one point, the executive producer, Jim Bell, commissioned a blooper reel of Curry’s worst on-air mistakes. Another time, according to a producer, Bell called staff members into his office to show a gaffe she made during a cross-talk with a local station.

All this happened before 2012, when Curry was unceremoniously fired from NBC (but the company wasn't aware of Lauer's malfeasance, right?). Even worse, the company put in place the structures that helped Lauer get away with his predations. Like the button behind his desk, for one...

As Variety describes, "His office was in a secluded space, and he had a button under his desk that allowed him to lock his door from the inside without getting up."

In other words, he used the button to trap the female colleagues he would harass. Variety notes:

"There were a lot of consensual relationships, but that’s still a problem because of the power he held," says a former producer who knew first-hand of these encounters. "He couldn’t sleep around town with celebrities or on the road with random people, because he’s Matt Lauer and he’s married. So he’d have to do it within his stable, where he exerted power, and he knew people wouldn’t ever complain."

Again, these are the consensual incidents. There were, of course, the ones where he just locked women in his office and harassed them.

Lauer also liked to harass women on the road.

Variety notes:
According to multiple accounts... Lauer would invite women employed by NBC late at night to his hotel room while covering the Olympics in various cities over the years. He later told colleagues how his wife had accompanied him to the London Olympics because she didn’t trust him to travel alone.
Again, the company says they didn't know about this and it was the first time someone had ever lodged a claim against Lauer.

The question then becomes how could they not have known when Lauer demonstrated such a pattern of misogyny and harassment?

Lauer was known to harass attractive female colleagues, and not only that, he showed his misogynistic bias in his reporting. Variety explains:
According to producers, Lauer — who had considerable editorial clout over which stories would ultimately air on “Today" — would frequently dismiss stories about cheating husbands. However, in the wake of Roger Ailes and Harvey Weinstein, Lauer had to keep up with a national conversation about sexual harassment. It often made for awkward moments on TV for staff members who knew about Lauer’s private interactions.
In plainer words, everyone knew he was a hypocrite.

And yet, NBC brass didn't do anything. In fact, they actively covered for him.

"Management sucks there," a former reporter said of the executives working on the Today show. "They protected the s— out of Matt Lauer."
This isn't particularly surprising, considering Lauer was their $25 million a year cash cow. They had to keep him happy.

But keeping Lauer happy came at the expense of everyone else.

Even worse, Lauer didn't seem at all reflective of his own behavior. Variety again:

In September, Lauer asked Fox News star anchor Bill O’Reilly if he’d ever sent lewd text messages to colleagues. “Think about those … women and what they did," Lauer said. “They came forward and filed complaints against the biggest star at the network they worked at. Think about how intimidating that must have been. Doesn’t that tell you how strongly they felt about you?"