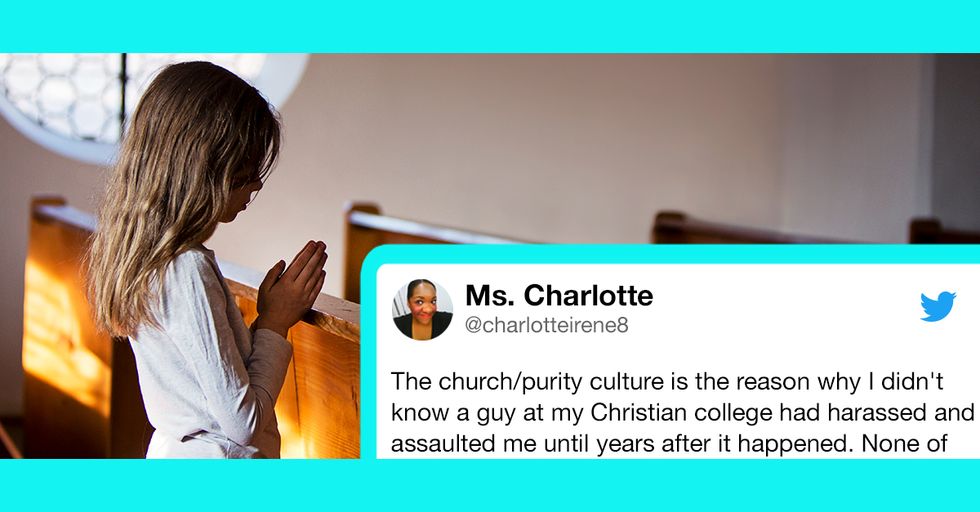 Imagine being a young girl and going to bible study or youth group. The conversation veers, as it often does, towards purity – the "claim that women’s bodies and clothing can cause men to 'stumble' with lust." Imagine, after hearing this often-repeated caution suddenly feeling horror and shame well up inside you. Through no fault of your own, you're no longer what is considered pure. But you know it's not your fault, so you tell your youth pastor about this horrifying incident.

Now imagine after everything you've been through, your youth pastor telling you to repent for your "role in what happened."

At a friend’s youth group, in response to a talk on purity and modesty, l went with tears in my eyes to a female vo… https://t.co/o5LtAIsvWF
— Shannon Dingle (@Shannon Dingle)1511305802.0

This is one of the many scenarios at play with the much-tweeted hashtag #ChurchToo. Modeled after the MeToo hashtag created by activist Tarana Burke – which has seen widespread use in the wake of the continued sexual assault scandals – #ChurchToo seeks to focus attentions on sexual assault and harassment in the church.
Emily Joy, an activist who created the hashtag together with fellow artist Hannah Paasch explained that while abuse is endemic in all spheres of life, it is even more problematic in the church, where the victim can easily be re-victimized due to conservative purity culture and entrenched patriarchy.

I've been told by church leaders to forgive abuse. To focus on my "anger problem" instead of the injustice I was fa… https://t.co/ENsQqUhpKx
— Courtney Christine (@Courtney Christine)1513883076.0

This is exacerbated by the lack of female leadership in the upper echelons of religious circles. For instance, as Slate explains, in "theologically conservative churches—a group that includes many slickly branded megachurches—women are forbidden from preaching."
There is also the overwhelming idea that women's bodies are sources of shame which must be covered up so as not to tempt men. Then, of course, there is the weaponizing of repentance and forgiveness.
Since women's bodies are inherently "sinful," they bear part of the cost in their assault. Furthermore, as it is Christian to forgive, the victim is oftentimes asked to forgive the abuser – and that's assuming they summon up the courage to name him or her in the first place.

"Any appropriate response to #ChurchToo and the problem of sexual assault and abuse in religious communities necess… https://t.co/0YKUDhlsCG
— Emily Joy (@Emily Joy)1513722626.0

Women are not the only victims of this dynamic. Take, for instance, the case of Paul Pressler, a former justice on Texas' 14th Court of Appeals, who was accused of molesting one teenaged boy for years and telling him that the molestation was their "God-sanctioned secret." As Joy explains, "It’s one thing to say, ‘I’m abusing you,’ and it’s another to say, ‘I’m abusing you, and this is how God wants it.’ "
In light of the #ChurchToo movement, as well as the general movement against sexual assault, female Evangelical leaders released a statement condemning violence against women.
As Religion News explains:

The statement, released Wednesday (Dec. 20), is accompanied by the hashtag #SilenceIsNotSpiritual and... was signed by pastors, professors, heads of parachurch organizations and popular authors and speakers such as Jen Hatmaker, Rachel Held Evans, Ann Voskamp, Amena Brown and Helen Lee.

"Women of all faiths, races, cultures and backgrounds are bravely breaking their silence," the statement's writers explain, "yet many in communities of faith do not match their bravery with action."
The authors also explain the religious basis of the call to action:

Fundamentally, we understand violence against any individual, regardless of their ethnicity, creed or gender, to be a matter of our Christian faith. Genesis 1: 26 declares that all people are made in the image of God, both men and women. Women are equally called and created with the full potential and capacity to steward the world. All abuse disfigures human dignity and distorts the image of God. Therefore, violence against her is violence against God.

In addition, they are careful to explain how the intersection of race and gender can make sexual assault even more problematic for women:

At the intersection of racial and gender violence women of color bear the disproportionate burden. 43.7 percent of African American/black women, 37.1 percent of Hispanic/Latina women, and 19.6 percent of Asian and Pacific Islander women have experienced rape, physical, violence, and/or stalking by an intimate partner. Native American women are most likely of all women to experience violence in their lifetime (84 percent) and on some reservations they are murdered at 10x the national average. Finally, when disability, gender identification and social stigma is considered, rates of violence increase dramatically for all people.

In the end, the authors ask for two things, that allies:

Stand with women who experience violence.

Stand up for women who experience violence.

You can read this powerful call to action here.