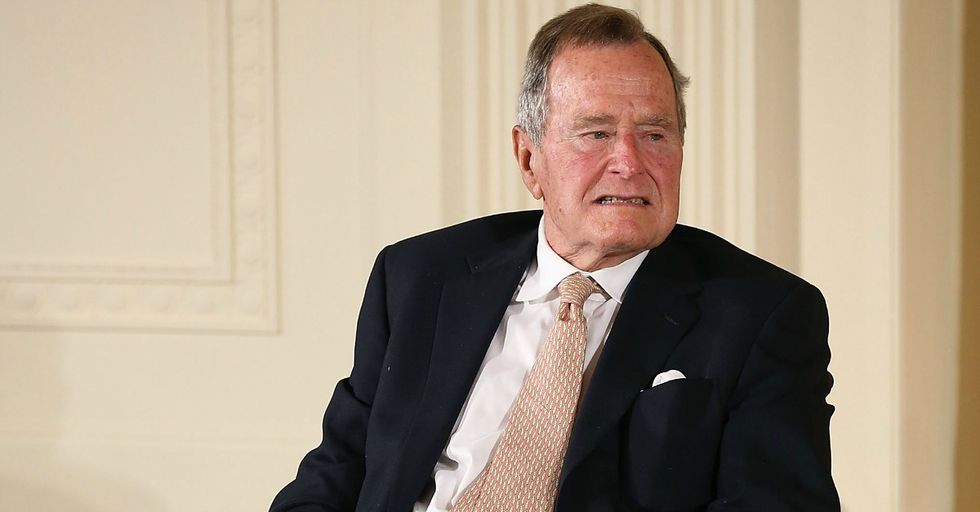 Another victim of George H.W. Bush has come forward with allegations of assault. Actress Jordana Grolnik of New York has a story very similar to the one Heather Lind recounted in a now-deleted Instagram post. Remember, the one people berated her for until Bush Sr. admitted that he had, in fact, assaulted her?

*Psst* This is your daily reminder to believe women.

Grolnik, speaking to Deadspin, said she got sent the Heather Lind story “And I’m afraid that mine is entirely similar."

Grolnik states that she met Bush Sr. backstage during intermission for a production of A Hunchback of Notre Dame in August 2016. Grolnik was one of the actors and she was initially excited when the elderly president took a picture with the cast.

Grolnik stood just next to the former President, and that was when Bush Sr. got himself a palmful and a handful.

Grolnik was shocked. She'd known the elderly Bush had a reputation for getting handsy, but she hadn't expected this. “I guess I was thinking – he’s in a wheelchair, what harm could he do?’"

“We all circled around him and Barbara for a photo, and I was right next to him," she said to Deadspin. “He reached his right hand around to my behind, and as we smiled for the photo he asked the group, ‘Do you want to know who my favorite magician is?’ As I felt his hand dig into my flesh, he said, ‘David Cop-a-Feel!’"

This behavior wasn't new. In fact, rumors of Bush Sr. groping actresses have been circling for some time, and he'd repeated the David Cop-A-Feel line before.

In addition to Lind and Grolnik, other twitter users had also attributed the "David Cop-A-Feel" line to Bush, but weren't available for comment.

Reached for a statement, Bush spokesperson Jim McGrath said this on the behalf of the former president:

“At age 93, President Bush has been confined to a wheelchair for roughly five years, so his arm falls on the lower waist of people with whom he takes pictures. To try to put people at ease, the president routinely tells the same joke — and on occasion, he has patted women’s rears in what he intended to be a good-natured manner. Some have seen it as innocent; others clearly view it as inappropriate. To anyone he has offended, President Bush apologizes most sincerely." Sure, this statement seems to make everything a bit lighter...

And sure, people who were present during the Grolnik incident SEEMED amused.

Grolnik said people “laughed politely and out of discomfort," while former First Lady Barbara Bush “said something along the lines of, ‘He’s going to get himself put into jail!’ to which we laughed harder."

But this forced laughter highlighted something important, which Grolnik herself took some time to realize.

At first, Grolnik says “I just thought, ‘Whatever. He’s a dirty old man." She was just thankful this wasn't a situation where people wouldn't believe her since there were so many witnesses.

But then she had a thought.

“I don’t want to belittle Heather Lind for feeling violated," Grolnik said. “Now that the #metoo movement has brought this all to light, I think I should have been a little more alarmed to be touched so inappropriately by a man who was once the leader of the free world. He knows the power he has, and the reverence he deserves, even while sitting perhaps somewhat senile in a wheelchair. What I’ve come to realize is that if we tolerate these small comments and grazes from men on the street or former presidents, they might assume that it’s ok with us, and they may take it as permission to do who-knows-what else. I realize that making light of the situation was the wrong move. It wasn’t ok for him to do that to me. He wasn’t able to give me a job or a movie deal, so I didn’t feel compromised or pressured to do anything more, but the comments and assumptions about our bodies must stop, at all levels."

And that's the takeaway from this.

It counts. Every small thing counts. Every inappropriate comment, every grope, every forced kiss, every act of nonconsensual touching, every rape, because together they build up to one vast oppressive system that works against both women and men. Bush Sr. may have thought his groping was done in a "good-intended manner," but he was committing and then normalizing assault. A death by a thousand cuts is still a death.