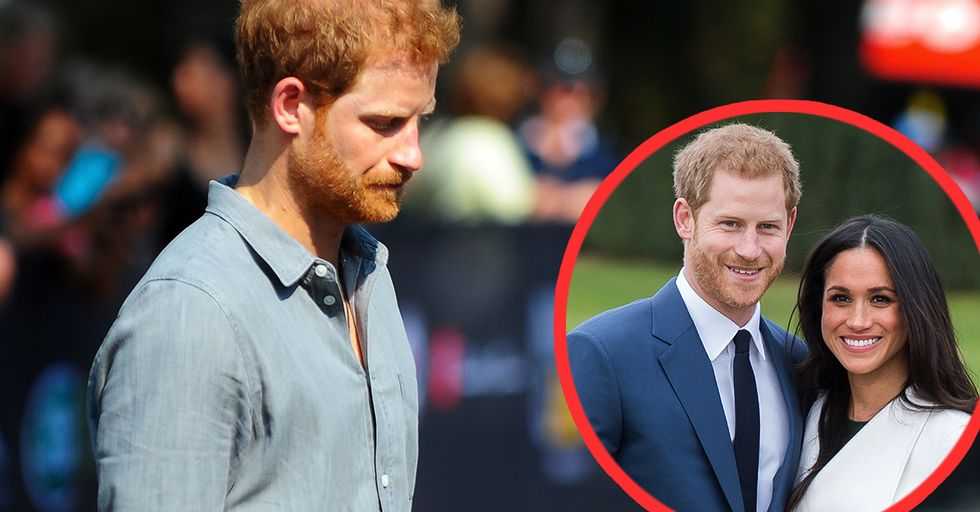 Prince Harry is getting married! After years of the single life, Europe's most eligible bachelor is settling down with American actress Meghan Markle, formerly of the TV show Suits.

It's a fairytale for the ages – boy meets girl, boy happens to be a prince, boy pops the question with a ring of very special significance...

Unfortunately, as with every love story, there are the practicalities.

Every relationship requires compromise. When people move in together, there's things that have to go to make room for each other. Remember that awesome drum set you have that you only used once or twice? Gone. How about that fine collection of vintage cassette tapes? Poof! Into the ether it goes.
Giving up things for the sake of your significant other can be a healthy, necessary step in order to make a relationship better. In the case of Harry and Meghan, it can also be a royal necessity. British royals are notorious sticklers for rules and protocol, and Harry's engagement is no different.

Yes we are buzzing here too with the announcement 5 days ago with the #engagement of the #beautiful couple… https://t.co/BqzSTJJQrv
— Black (@Black)1512275866.0

In order to marry Harry, Markle had to give a few things she'd gotten used to – Instagram, for instance. It is not becoming of a duchess of the realm to engage in Instagram shenanigans, apparently. So it was given the axe.
Markle also had to give up other things, like her United States citizenship (obviously) and her career. Sadly, all the duties of being a royal are probably not compatible with being an actress, although we never know if Meghan may one day "tread the boards" again, as they say.

She's also moving to a completely different continent, and adopting a way of life totally foreign to her own, and, indeed, to most people's. And most tragic of all, she had to give up one of her dogs because it was too old to make the trip across the pond.
But she's not the only one who had to give up things – as it turns out, Prince Harry had to do the same as well. England's The Daily Mail reports that Harry had to give up smoking in order to be with his ladylove.
The prince is a sporadic smoker, and has been known to take an occasional puff or two during his notorious party boy days. He continued the habit up until recently, even smoking at Nottingham Cottage, where he and Meghan now live – although smoking is banned both there and at the palace.

Harry's flexible fiancee! Meghan Markle shows off a range of yoga positions after declaring that the discipline is… https://t.co/CHTKDv4Omv
— Mandala Essentials (@Mandala Essentials)1512960536.0

Still, it seems Harry now wants a healthier lifestyle, which is essential since Meghan is notoriously health conscious. Meghan has been into yoga all her life since her mother is a yoga instructor. As she said:

There are so many benefits that come with the practice of yoga... increased flexibility and muscle strength, greater happiness, increased mental focus, a greater ability to relax, decreased anxiety and better sleep... That practice is in my blood.

Meghan also tries to eat a clean and healthy diet. "I try to eat vegan during the week and then have a little bit more flexibility with what I dig into on the weekends," she says.
But she's not always a hundred percent healthy. "I could eat French fries all day. And I love pasta. I love carbs – who doesn’t love a carbohydrate?"
She doesn't shy away from a good drink either. "Of course I’m going to have that glass of wine – it’s delicious and I enjoy it," she said. "Do the things you enjoy within reason. Know your body and what works for you and you’ll be fine."
Still, the smoking is the one deal-breaker for her, which is why Harry is quitting. As a friend of his explained, "Harry has promised no smoking at all at home. It’s not nice for Meghan as a nonsmoker. So there’s no more hanging out of the window for a quick puff. Harry has quit for Meghan."
How sweet! But as a reminder, a significant other isn't the only reason you should quit smoking. Smoking causes cancer, yellowed teeth, bad breath, erectile dysfunction, respiratory disease, heart disease, cervical cancer... and the list goes on and on and on...