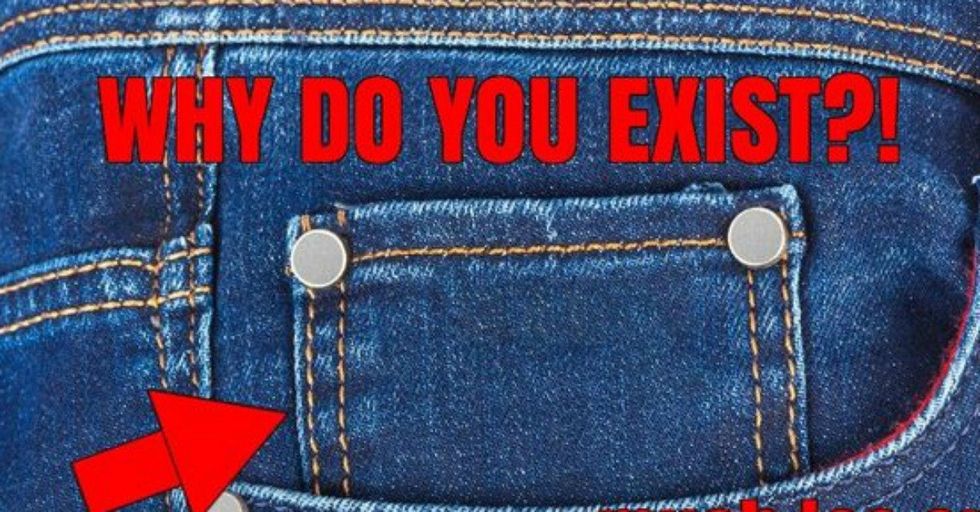 I think it's safe to assume that most people own at least one pair of jeans. And while wearing that pair of jeans, you've tried to put something in your pocket only to have it get caught in that tiny stupid little pocket inside the intended pocket.

And while in the midst of cursing the Levi Strauss gods for creating this seemingly useless little piece of denim real estate, you might have wondered, "Why is this thing even here?!?" Well, it turns out there is a historical reason.

According to the Levi Strauss & Co blog, that tiny little pocket was actually originally intended for men who wore pocket watches.

Appropriately enough, it’s officially called “the watch pocket," and intended to provide protective storage for all those pocket watches back in the day when people carried pocket watches, which have been replaced by phones that do not fit in that pocket. Anyway, one mystery solved, one to go.

This one involves those tiny little buttons on your jean pockets that appear to have nothing to do with anything other than a primitive form of denim bedazzling or something.

But as it turns out, much like the puny pockets, these little buggers have an actual purpose and an actual name — rivets. Riveting, no?

They’re there to prevent jeans from wearing out and ripping at the seam, and those copper rivets are actually patented by Levi.

Strauss came up with the idea for them way back in 1829 when he noticed miners were complaining about how quickly their pants wore out. We cannot have pantsless miners, so a solution was quickly created. Now the next time you put on your jeans, you can do so with the knowledge that you never knew you wanted to know but are somehow grateful that you do — if only to win some trivia at the bar next Friday night.