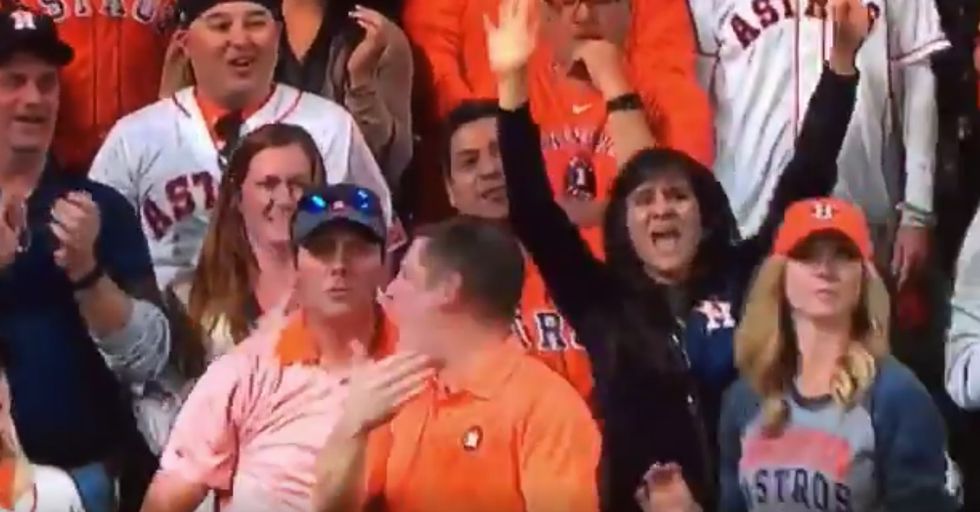 For a long-time baseball fan, it might seem obvious that if you caught a home run ball from a player on the opposing team, you would throw it back onto the field, for tradition's sake, superstition, or simply to make a point. But if someone next to you caught a ball, would you wrestle it out of their hands and throw it back?

That's what happened in the Astros vs. Dodgers World Series game yesterday.

People are pretty riled up over this video.

In game five of the world series last night, Yasiel Puig of the Dodgers hit a home run ball into the stands.

A woman caught the ball and held it high above her head, celebrating with the man standing next to her. Then a third person, the man in the pink shirt, grabs the ball out of her hands and throws it back onto the field without hesitation. We've been watching this video over and over just for the faces.

It turns out the three knew each other.

Sarah's in-law, Kirk, had his reasons for snatching the ball.

"It’s bad karma to keep it," he said, and then, "You’ve got to throw it back. I was just making sure she did." But Sarah was going to throw it back! And what if she wanted to do something else with it, like sell it online, get it signed, or save it as a souvenir? People were annoyed that he took that chance away from her.

People took to Twitter to call out the ball-stealer.

Twitter user @nycsouthpaw called him a jerk, but other Twitter users' expletives were not quite as PG-rated. Southpaw makes a good point when he asks why Kirk couldn't have just asked Sarah to throw the ball back herself.

Fallon Smith, who is an Emmy-winning sports anchor in the Bay Area, said that she would have had a bone to pick with Kirk if she were Sarah.

"Did u see that Astros fan take the HR ball from the other fan & throw it back onto the field?? Bruh, we would have fought, LA HR ball or not," she wrote yesterday.

Other people looked more fondly on Kirk's actions, calling him a man of principle and loyal Astros fan.

Sarah and her brother-in-law hugged after the incident but might take more than a hug to make up for a lost world series home run ball. This could make for an awkward Thanksgiving.