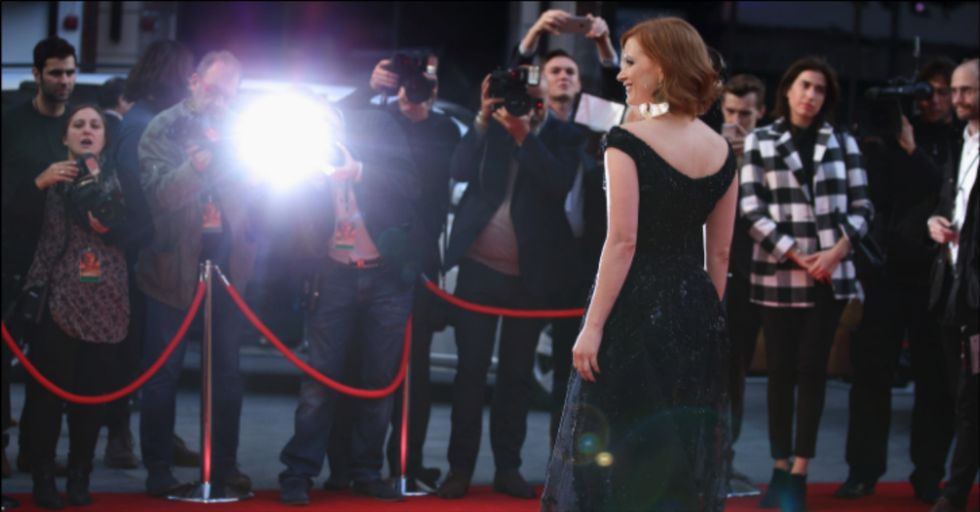 If you're at all plugged into the goings on of Hollywood, you probably know that the Golden Globes nominees were revealed earlier this week. Now's the perfect time to catch up on all the movies you haven't seen yet and start preparing for all the incredible red-carpet looks. However, there's a rumor going around that several actresses are collaborating on their outfits for the Golden Globes in order to make a very powerful statement. We love the plan!

Apparently, a number of actresses are going to be attending next year's Golden Globes wearing black.

According to Us Weekly, a small group of actresses planned to wear black at first, but as word got around more actresses have joined the black dress roster. But why black?

Don't worry. It's for a worthy cause.

The black dresses will be a symbol of protest against the sexual harassment and assault that most of us laypeople learned this year has plagued the entertainment industry for years.

If they go through with their protest, it'll certainly be a striking display.

Obviously, stars have worn black outfits for years without it being tied to any sort of statement, but the additional meaning behind their garments this year will definitely have us paying attention to who is participating (and who isn't).

As you'll no doubt remember, the revelations of the sexual harassment and assault issues within the entertainment industry were revealed back in October.

That was when The New York Times published a bombshell report revealing Harvey Weinstein's decades of abusive behavior toward women in the industry. Since then, dozens of men in Hollywood and other industries have been revealed as sexual predators. And you'd have to be living under a rock to miss the #MeToo movement that was sparked as a result of the news. The landscape of the world has changed drastically over the past few months, and it doesn't appear to show any signs of stopping.

The news of actresses wearing black to protest sexual harassment comes on the heels of another inspiring award-show announcement, this one about the SAG awards.

Earlier this week, it was reported that next year's SAG awards will be presented only by women. The awards will also be hosted by Kristen Bell. A woman! Reactions to the news that actresses will be wearing all black to the Golden Globes have been mixed, but largely supportive. Here's what the Internet had to say...

Many people think the outfit uniformity is an awesome show of solidarity for victims and survivors of sexual harassment and assault.

And we have to agree! It's important to listen to and believe the victims who have come forward to share their stories. Having a concrete way to show that you're listening is all the more valuable.

And of course there are people who don't think the actresses are doing enough.

But hey, if you can show your support for sexual assault victims and look good while doing it, why the heck not? As it turns out, the actresses aren't the only ones who are wearing black in solidarity.

You probably could have put that together yourself. Anyway, if you're looking for a way to show that you stand with survivors (and dress like a movie star at the same time), maybe you could adopt the #ThursdaysInBlack movement, too!

Here's an interesting take on what the actresses could do rather than wearing black:

Not a bad idea, although we're fans of any idea that proves people are paying attention to the world around them and rooting for the good guys instead of the bad ones that have been able to enjoy successes in spite of their deplorable behaviors.

Here's another idea of what the Golden Globes could do to show that they're truly interested in making the world a better place for women:

Look, we have a long way to go in a lot of areas. But this is an awesome first step. We look forward to seeing the black dresses at the show!