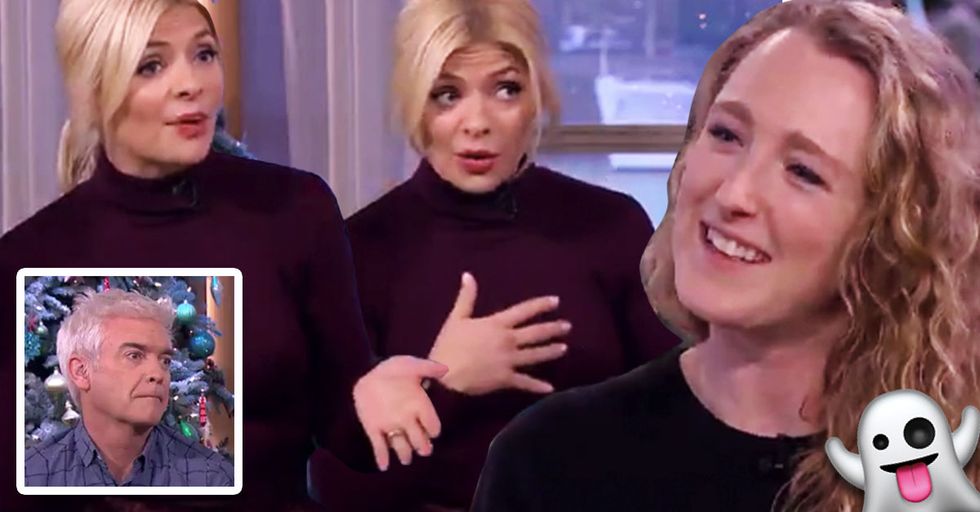 This Is the Story of a Woman Who Actually Left Her Husband... for a Ghost

In 1990, the film Ghost arrived in theaters. Featuring Patrick Swayze and Demi Moore, Ghost followed the story of a young woman whose deceased boyfriend attempts to help her when he discovers she's being stalked by his corrupt business partner. Ghost was an instant romance classic, grossing half a billion dollars during its theatrical run and becoming the biggest movie of 1990.

Five years later, a more family friendly ghost story arrived in theaters. A mix of live-action and computer animation, Casper followed the adventures of a friendly ghost who becomes enamored of the daughter of a paranormal therapist. The film was a commercial success, opening at number one on Memorial Days and eventually grossing nearly $300.
The message was clear, people really like ghosts, and the idea of a ghost-human romance was obviously titillating to a certain segment of the population. There's even a word for it, spectrophilia, which Glamour explains as the fetish by which one is sexually attracted to ghosts.
Mark Griffiths, Ph.D., of Nottingham Trent University, a psychologist who explores “addictive, obsessional, compulsive, and/or extreme behaviors" writes that "spectrophilia as a condition is probably real, even if ghosts themselves aren’t."
Still, if you were ever intrigued by Thackery Binx, the ghost boy that became a cat in Hocus Pocus, or felt a stirring in your loins at the thought of Bruce Willis' gloomy scowl in The Sixth Sense, then you, my friend, have been struck by spectrophilia.

A very much real life example of spectrophilia is making waves across the pond in Bristol, England. 27-year-old Amethyst Realm, a "spiritual guidance counselor" says she’s had sex with at least 20 ghosts.

No, this is not a joke (and neither is her name, apparently), Realm sat down with the hosts of British TV show ITV This Morning to discuss her sensual otherworldly experiences.
Realm says it all started ten years ago when she and her childhood fiancé moved into a new home and she began to feel a spectral presence. That presence must have had quite the moves, because the relationship quickly became physical... in the spectral sense, that is.

It started as an energy... There was pressure on my thighs and breath on my neck. I just always felt safe. I had sex with the ghost. You can feel it. It’s difficult to explain. There was a weight and a weightlessness, a physical breath and stroking, and the energy as well.

Well, talk about taking being ghosted to the next level.

Realm's otherworldly affair lasted for three years – THREE – until her husband came home from work one day to catch her in flagrante delicato with the shadowy figure of another man.

Since then, Realm says, she has been with over 20 ghosts, and is now hoping to find that special specter to settle down with. "I’ve done a bit of research into phantom pregnancies," she said. "There’s a possibility that it is a ghost in you, but people don’t know how to carry it to full term."

In the meantime, she's going to continue looking – not that we anticipate she'll have trouble. As host Phillip Schofield quipped, "I should imagine you have got quite a name for yourself in the spirit world," he said. “I would imagine they would be keen to visit you."
Psychotherapist Tina Radziszewicz isn't so sure about Realm's otherworldly encounters. She told the Mirror that "it’s very possible that ghostly sexual encounters are actually a type of hallucination that occurs during the transition between wakefulness and sleep." “Such hallucinations can be extremely vivid and bizarre, and can include tactile, visual and auditory," Radziszewicz said. “Stress, anxiety, depression and trauma can make people more prone to this form of hallucination."
Still, Realm isn't the only person to claim to have been *ahem* visited by spirits, however. As the Huffington Post notes, "Singers Bobby Brown and Kesha also say they’ve had supernatural sex sessions."
Both report that the experience was quite... stimulating, but we're not so sure. As ghost researcher Alexandra Holzer explains, "The people who report having sex with a ghost report feeling pressure on them and even penetration, but ghosts don’t have warmth... When they’re in the room, it’s a very cold environment." Sounds very romantic.
20%

$43.19 $34.55
Buy Now
See More Deals
We hope you find these deals as awesome as we do! Just an FYI: we may receive a share of sales from links on this page