This Is the Surprising, Smart Explanation Behind Amazon's Decision to Put Small Things in Huge Boxes | 22 Words 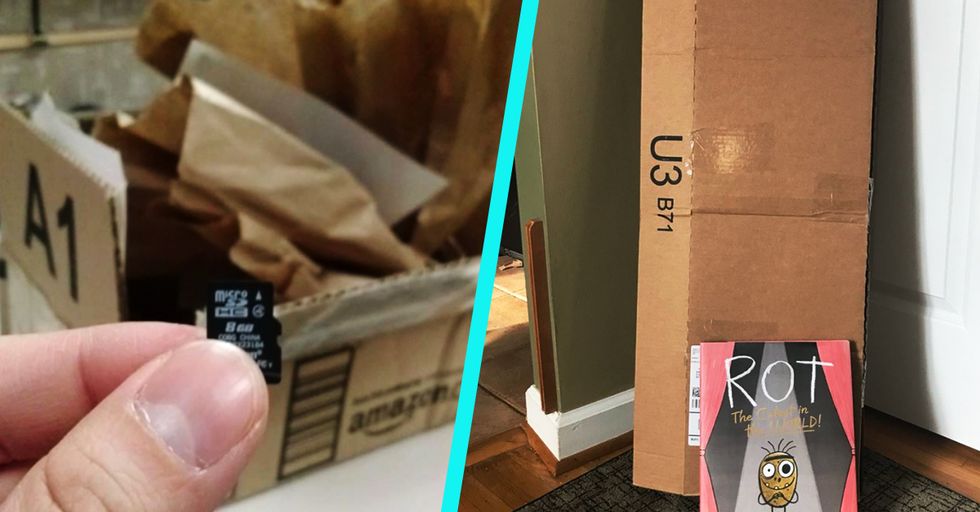 This Is the Surprising, Smart Explanation Behind Amazon's Decision to Put Small Things in Huge Boxes

If you've ever ordered anything from Amazon, then you know the struggle. You order something small like batteries or a keychain, and Amazon delivers it to you in a gargantuan box filled with 30 feet of that air pocket stuff.

You probably shake your head and mutter something to yourself like, "Oh, Amazon. When will you learn?" before breaking down the box and adding it to the pile. But as it turns out, Amazon already has learned, and there's a very good reason for why they're always sending your little stuff in big boxes.

Amazon is notorious for using excessive packaging. Here's the box they deemed appropriate for a teeny-tiny SD card:

No, it wasn't a box of thousands of SD cards. It was just the one. One SD card and a bunch of packing paper.

On the bright side, their phone case arrived safe and sound. Plus, they have bonus air pockets to pop and annoy all their friends. That's kind of a win, right?

Did you order one pack of batteries? Better get a box that could hold approximately 1,000 of 'em!

Maybe Amazon just wants you to be able to impress your neighbors with the size of the Amazon boxes you get delivered to your door. That's something people care about, right?

A long skinny box would have been just fine for this toilet plunger...

...But nooooooo. Amazon just had to grab a big box.

And how about this one?

Amazon: "Yo, we heard you like wrapping so we wrapped your wrapping paper up in a bunch of wrapping materials so you could unwrap your wrapping paper." These pictures may seem like huge fails on Amazon's part, but as it turns out, everything is actually going perfectly according to Amazon's plan.

As you may have already guessed, the "problem" can be blamed on Amazon's robots.

In fact, while Amazon warehouses are primarily staffed by humans, robots play a lot of super important roles within the company. The result is an interesting human-robot symbiosis that it takes to deliver the random stuff you've ordered online directly to your door. And it's the robot part of the Amazon staff that's responsible for choosing box size. Amazon uses some super complicated software to determine which box to use, but it's not based solely on the size of the product. Instead, the software also takes into account the actual truck that will be carrying your package to a distribution center, as well as the other boxes that will be in the truck.

The software is basically playing Tetris to find the most efficient way to stack boxes inside the truck.

Sometimes a truck won't have as many packages to carry, and Amazon will automatically put your product into a larger box. That way there's less empty room in the back of the truck.

Which is good. Otherwise, the packages would slide around and could get damaged. Or you could end up with a situation like this:

Yep, that's one inefficiently loaded truck, all right. Another bonus to Amazon's giant box system is that if a situation like the one pictured above does occur, your products are kept safe and sound by all that extra padding.

It might look wacky when you open your box just to see an embarrassing amount of air pockets, but when you consider the process as a whole, it's actually pretty brilliant. In fact, Amazon's system actually minimizes waste, even if it may seem like it does the opposite. There's also a place on the Amazon website where you can review the packaging from your specific order. So if you ever feel as if Amazon's box size has been particularly ridiculous, feel free to leave them feedback!
Buy Now

And your cats love 'em! Needless to say, we welcome our robot overlords.