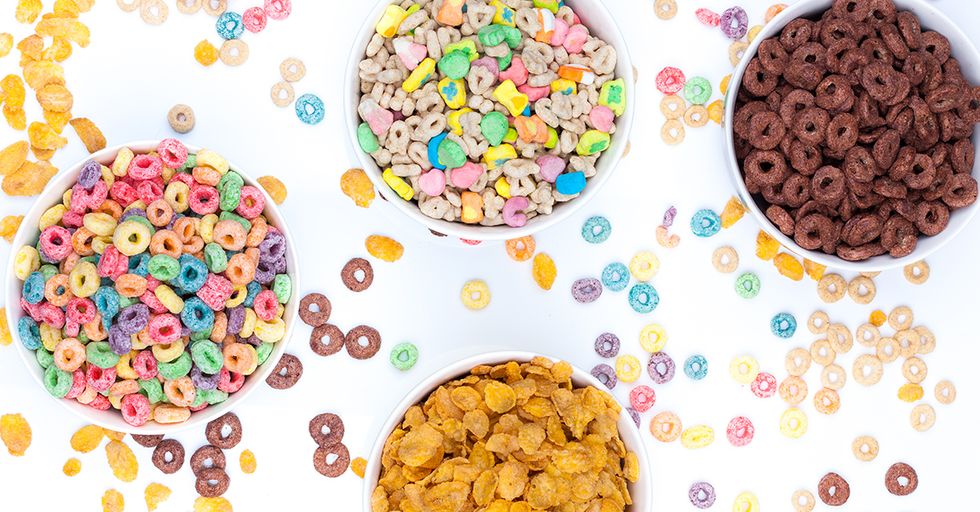 There is not a single bad thing about cereal. It's a perfect creation – the simplest yet most satisfying meal. Listen, who among us hasn't crushed an entire box of Cap'n Crunch Peanut Butter in one sitting? Was that only me? Sure, it was a dark time in my life but it was worth it.

Cereal is universally delicious. Whether you're going the healthy route and prefer the simplicity of a granola-esque, low sugar cereal, or whether you're in the mood for something more dessert like, there's always an option for everyone. Entire restaurants have been created in honor of cereal! That's how good it is!

Sidenote: never trust a person who only eats one bowl of cereal. Who does that? People with willpower? Psssh, whatever. I cannot resist the power of cereal and I, a grown adult living independently, will gladly eat 2-3 bowls of cereal for dinner. No regrets, Y'all.

So cereal is great and it's been around forever. Read on to take a peek at some old school cereal boxes from back in the day...

Did you know cereal was invented all the way back in 1863?

Yep, cereal goes waaaaaay back. The first cold cereal was called "Granula" and was invented in the United States by a man named James Caleb Jackson.

Thank you, James. Thank you.

Although, his product never became popular. It might've been because you had to soak the bran and graham nuggets overnight. Too much work, right?

But what did become popular was packaged breakfast cereal.

Which, obviously. The convenience of packaged cereal is truly hard to beat.

Here's an interesting fact: the Seventh-day Adventist Church actually has a lot to do with making cereal popular. Who would've thought?

John Harvey Kellogg, born in 1851, was the son of an Adventist factory owner.

Even if you hate cereal, you know that the name "Kellogg" is pretty much synonymous with it.

Kellogg was a doctor and a nutritionist.

People came to him with their health problems, and he noticed their diet consisted heavily of fried potatoes, ham, eggs, sausages, biscuits and hotcakes for breakfast.

So Kellogg began to experiment with granola.

Then, he started experimenting with wheat. This resulted in a flakier texture.

In 1891, Kellogg knew he had something special.

He got a patent and in 1895 he created the Cornflakes brand. The rest is history.

Cereal is a staple of American culture and breakfast.

We love it. We eat it. It's the best. It's also been around for quite awhile...

Cereal is an OG breakfast food.

Anything that's been around for awhile changes over time. Just look at Mac products...

I mean, just look at that design. It's so boxy.

So, yeah – everything changes over time. Including cereal boxes.

There are so many old school cereal boxes.

Let's take a walk down memory lane, shall we?

The box from the '50s is totally retro. Look at that child's face. He's amazed at his cereal.

That apple from 1965 is terrifying. I will have nightmares about that apple.

The color scheme is exactly the same, and the captain hasn't changed that much either.

This 1941 "Cheeri Oats" box is so cool! It's also fun to see how the name has evolved. Cheerios definitely rolls off the tongue better.

I'm digging the font from the '80s. Same colors though. I guess they figured why fix something that ain't broke?

You can definitely tell the old Cookie Crisp box is from the '70s. That wizard is really something.

That old cereal box is from 1906 and looks every bit as vintage as it is.

I am not kidding when I say that the 1963 Fruit Loops box is a big mood. It's so fabulous, I want a giant print of it to hang in my living room.

OMG, did Tony the Tiger grow up from a cub to a full tiger right before our eyes? He was such a cute, tiny baby in the '50s.

I love how for the majority of these boxes, the colors are pretty much the same – like this Life cereal box from the '60s.

The 1964 vibes are strong with this one. The leprechaun looks a bit different, too.

Here's a box that went in a different direction with colors. Although the 1940s Raisin Bran vibes are super cool.

Snap, Crackle, and Pop were nowhere to be seen back in 1928. Just a nice, beige, straightforward box telling you these babies are "ready to eat."

Whoah, this cereal box and look has changed drastically since the 1940s.

Silly rabbit? More like scary rabbit. The Trix mascot got a facelift from his 1960 version.

The old school look from the '50s and '60s of Wheat Chex is very chic.

The 1930s version of the Wheaties box is simple but effective. And they've obviously kept with the sports theme. Share this with your friend who is obsessed with cereal!