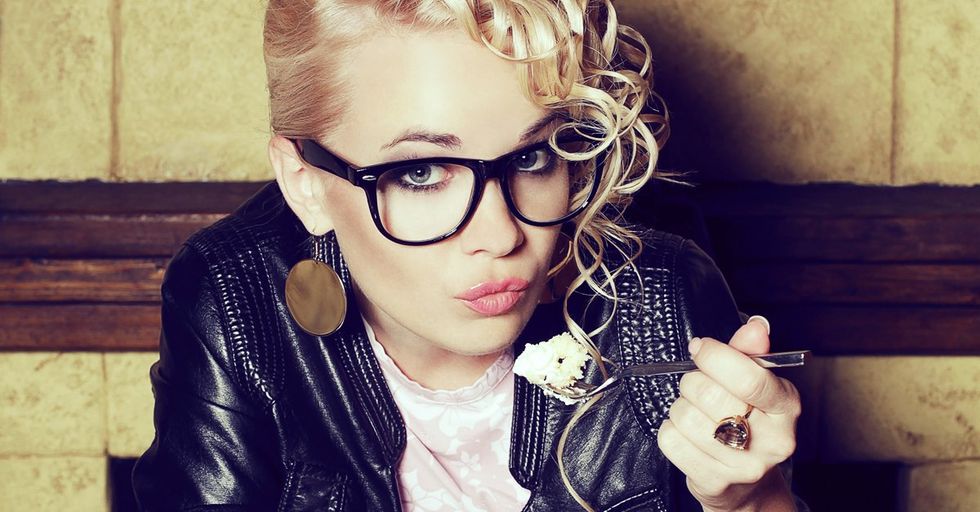 Much like fashion and entertainment, food trends change as time goes by and people get obsessed with whatever is touted as the latest and greatest thing.

Some stick around, but others had their moment to shine and were then put away like that fondue pot that you used about once or twice.

Check out what Cosmopolitan thinks people would have been filling their Instagram with for the past 47 delicious years.

I guess people weren't so trendy about food before then, but let's dig in anyway...

This savory egg pie was an easy way to throw a bunch of leftovers in a pan for a quick meal. Plus, it was French, so it sounded très chic.

Before Millennials were claiming they invented brunch, people were all over English muffins topped with Canadian bacon, a poached egg, and Hollandaise sauce.

It was the preferred drink of Mick Jagger, and he jokingly called The Rolling Stones' tour that year "The Cocaine and Tequila Sunrise Tour." Drink up like a rock star.

It's foreign! It's DIY dinner! Many people jumped on this trending train, but it soon turned into fon-don't.

Health food was for hippies in the '60s, but it went mainstream in the '70s, with granola leading the way.

The '70s were full of creamy pasta, and Sirio Maccioni, owner of Le Cirque in New York, claims to have first put this mix of long noodles, creamy white sauce, and vegetables. But did it come with unlimited salad and breadsticks?

Why or how this dish made it to America is unclear, but as it's made here — deep-fried, sweet and sour, boneless — started making the rounds about this time.

The snacking staple was first introduced in 1964 at the Anchor Bar in Buffalo, New York, but the city declared July 29 Chicken Wing Day in 1977.

In the '70s, "Americans went wild for flaky, buttery croissants," Lovegren wrote in Fashionable Food, and they would either buy them from croissant shops or make them at home using refrigerated Pillsbury Crescent dough. Plus, again, they were foreign and sounded so fancy.

Everyone who was anyone was eating fresh goat cheese around this time, especially those who ate at the restaurants of pioneering California chef Jeremiah Tower, who made it a mainstay served warm over a bed of salad greens.

Quick story: A plumbing contractor created this salad dressing, made with buttermilk, mayonnaise, garlic, onion, and herbs like dill and chives, in the 1950s. He later served the dressing at his Santa Barbara dude ranch, Hidden Valley Ranch, selling it in packets for customers to take home. Henson and his wife Gayle later created Hidden Valley Ranch Food Products, and the rest is history. It quickly became the preferred way to infuse otherwise healthy dishes with a palatable amount of fat and was everywhere in the '80s...and really hasn't gone away.

Kiwis started taking over in 1962, when an L.A. grocer started importing them from New Zealand. They were showing up in salads, meat dishes, and tarts everywhere by the early '80s, when they became so pervasive that there was a kiwi backlash by the middle of the decade. It's a kiwi uprising!

This wasn't a new thing in the '80s — it's a dessert that was even served to Jefferson in the White House — but it showed up on Le Cirque's menu around this time and soon started up the blow torching trend.

Italians first started making vodka sauce in the 1970s, and Americans embraced it in the '80s after a New York City eatery called Joanna's Restaurant started serving it. The creamy tomato sauce actually does have vodka in it, so let's bring this trend back, now shall we?

Nothing really complicated here. Filets are dropped into a super hot skillet and cooked until, well, blackened. But you can thank Chef Paul Prudhomme's Louisiana Kitchen cookbook for the popularity.

Fajitas are delicious and gained popularity as Tex Mex cuisine swept the nation about this time, but let's be honest. Who wants to do all of that work when you go out to eat? Then again, that sizzle...

Mixing wine with soda, carbonated water, or juice doesn't sound that fancy, but alcohol brands sold bottled "wine coolers" to capitalize on the spritzer trend, and Bruce Willis even starred in a Seagrams ad with the tagline, "This is where the fun starts."

The '80s were about luxury chocolate, including truffles, in part because of Alice Medrich. She opened up a specialty store, Cocolat, where she sold the decadent treats that are thankfully still making the rounds.

Who needs to cook when you can eat raw fish? It was about this time people decided that seafood was healthy, especially when it didn't require you to cook it (see you later, blackened fish).

A London-based natural food restaurant owner named Gregory Sams first marketed a meatless patty called the "VegeBurger" in 1982 as a dry mix that would get rehydrated before consumption. By the mid-'80s, the VegeBurger had landed stateside, where other vegetarian patties like the Gardenburger were also being introduced and they're still around today.

The New York Times first published a recipe for it in 1985, but it gained popularity in the early '90s when people were looking for a pick-me-up. A dessert of Italian mascarpone, coffee, eggs, ladyfingers, and chocolate will do that for ya.

Celebrity chef Wolfgang Puck led the charge on this one, and his version of the Chinese chicken salad, the Chinois chicken salad, became a symbol of this style of cooking. And it has lettuce, so it was basically a health food, right?

Was there even life before Starbucks? It started as one store in Seattle in 1971, and almost 20 years later, in 1992, it went public with a revenue of $73.5 million. By this point, it had 165 stores. Two years later, that number would more than double, and two years after that, in 1996, the company launched its first store outside North America. In other words, it will take over the world in the next decade or so.

Italian cuisine had a big influence on foods at this time, with things like sun-dried tomatoes and balsamic vinegar being thrown in everything from salads to pasta.

About this time people busted out the SnackWells and thought that just cutting out fat but still eating high-calorie, high-sugar foods was the answer to the obesity epidemic. Americans actually got larger, as fat-free doesn't mean free-for-all.

If you were a '90s baby, then you know all about snacks like Doritos, Cheetos, Flamin' Hot Cheetos, Pringles, Funyuns, Push-Pops, Ring-Pops, Lunchables, Dunkaroos, Hot Pockets, Pizza Bagels, Pizza Rolls, Gushers, Fruit Roll-Ups, Handi-Snacks — the list goes on. Needless to say, no one was yelling about organic or trans fats yet.

People weren't too into squid until it was fried, because...America. But it peaked in about 1996 when it was mentioned in 56 different New York Times articles, presumably in glowing terms.

There are many people who will claim they started the popularity of chocolate cake, but honestly, who wouldn't like chocolate cake? But recipes really started making the rounds this year in Joy of Cooking and Food and Wine, so we're just glad it showed up somewhere.

If chocolate wasn't your thing, there was always crab, which were a specialty of Baltimore, Maryland, but spread across the country and became a menu standard at the end of the 20th century.

Let's just say Sex and the City came out in 1989, and seeing as Carrie Bradshaw basically drank five Cosmos a day before Happy Hour even started, some of the popularity of this mixture of cranberry juice, vodka, triple sec, and lime juice.

These things are still all over the place, so they have more than just digestive staying power. Most of the popularity can be attributed to the opening of Jamba Juice.

Before anybody had figured out that mixing super-caffeinated drinks with alcohol is pretty bad for your health, mixing a can of Red Bull with a 2-ounce shot of vodka was a concoction that would keep you going all night in the club and then on the floor the next morning.

It was at this time the U.S. Department of Agriculture officially defined organic standards in response to a public demand for pesticide and chemical-free food. Not a crazy request. It was also about this time Whole Foods starting expanding, and as we know, the chain — and their $5 apples — haven't gone anywhere but up.

Low-fat didn't work, so why not cut out another complete category — carbs! At least that was the thinking, due in part to the Atkins Diet. We all know how great that worked. Spoiler alert: It didn't. Moderation, people.

In 2004, market research firm NPD found that yogurt was the top food to have increased the most in the American diet that year — and this was before John Stamos or Jamie Lee Curtis touted the benefits. Now that's some staying power.

Much like the Cosmos, Carrie Bradshaw and Sex and the City had a hand in making these little luscious lovelies a mainstay by eating them from Magnolia Bakery. People started quitting their jobs to open their cupcake bakeries and now we even have Cupcake Wars. What a great time to be alive.

People loved yogurt, so people loved frozen yogurt. While earlier decades were all about TCBY, it was about this time frozen yogurt got an update to taste more tart, and more like, well, yogurt.

The Oxford Word of the Year was "locavore" in 2007, and people were much more conscious about where their food came from. Buying from local farmers meant it was better for the environment, the local economy and their health.

Not just the packages you can get for 25-cents and a day's worth of sodium, but ramen in restaurants, as people were flocking to Momofufu Noodle Bar in NYC to eat the signature dish. Naturally it spread around the country and hasn't gone anywhere.

Do I have to explain this one? It started turning up everywhere from doughnuts to chocolate to alcohol. There was a 40 percent increase in bacon consumption in the years leading up to 2009, and the trend is still going so strong it's not really a trend anymore. It's just...bacon.

The only thing better than food is food you can quickly get off the street from an actual cook, which was the thought behind this boom in roving restaurants. It was also this year that Food Network launched The Great Food Truck Race, so it had that going for it, too.

You could put hummus on a shingle and it would still be delicious, but it was about this time Sabra started to educate the American consumer on what exactly hummus is (a chickpea spread). And thus, a new snacking staple was born.

Love it or hate it, kale has made a name for itself. It can thank TIME Magazine for declaring it a super food in this year as it ended up in everything from salad to smoothies. And much like bacon, it hasn't gone away. That's about the only thing kale has in common with bacon.

Chef Dominique Ansel introduced the donut-croissant pastry on Mother's Day of 2013, and had 100 people waiting in line for a taste two days later. Thus, a new food hybrid — the first of many — was born.

On the other side of the spectrum, it was about this time "superfood" was the buzzword, and quinoa fit the mold. People started using the gluten-free grain in everything from baked goods to savory dishes.

It's so simple — toast and avocado — but it has spawned an obsession that only a California drought and avocado shortage can put a damper on. The recipe has been personalized in millions of ways, with whole cookbooks dedicated to variations on what has become a staple image on plates and Instagram.