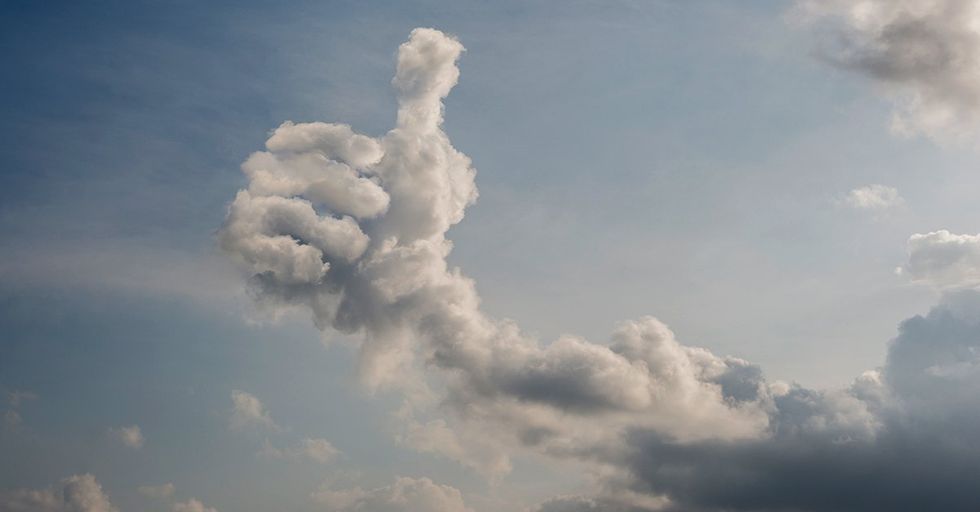 Listen, we can debate all day about the existence of God and creationism (which didn't happen) versus evolution (which did). Or we can put that all aside and laugh at some jokes people made about what God must have been thinking when he (or she, or it) created some of the animals and items we take for granted every day.

Because if you think about it, giraffes are super weird. There is no reason for centipedes to have as many legs as they do. And seahorses? What even are those? The people of Twitter get up to a lot of different things, but one of the most innocuous and hilarious is imagining exchanges between God and angels or whoever else was listening when dog created some of the animals and objects we have learned to love and accept. From spiders to snakes to...coconuts (that's right), the people of Twitter have figured out exactly what God's thought process was when creating them.

What even is a hippo?

Do you know? This and others are the questions the people of Twitter have been asking themselves. And they've come up with answers. God's answers.

It does seem like whoever made spiders got a little carried away with that one. They've got so many things.

So much water...so much of it undrinkable. But it's good for salt! Sea salt is classy, AF.

I have never thought about this before, but it's true. Coconuts are basically animals. They're even kind of cute if you think about it.

I like to think that after seeing the giraffe, the corgi left and was like, "Well, I'm way cuter than that monstrosity, so whatevs."

Hm, I don't know about this one. Do you think saxophones were invented before seahorses? Not trying to poke holes in this theory or anything...but it seems unlikely.

I love that in this scenario, God shimmies to show the snake how to move. I would pay to see that.

Ants really are some of the most remarkable creatures on the planet. I have to stop thinking about them, otherwise, I'll get emotional.

Bees make no sense. There, I said it. Especially bumblebees, which scientifically should not be able to fly!

[God creating animals] God: I want to create a bag of evil. Angel: And name it something really sweet. Say hi to the 'Jelly Fish'
— Prakhr Srivastav (@Prakhr Srivastav)1518521160.0

Jellyfish really are bags of evil. Once, we were swimming in the ocean and when we came out of the water, my dad had one in the pocket of his shorts. No thank you.

Yeah, but God also made us so when we drink that milk, we get explosive diarrhea, sooooo who's upset now?

This must have been how it went down. There is literally no reason for centipedes to have that many legs.

Sure, horses can pull carriages and plow fields, but they can also carry a human very fast while that human is simply sitting down.

There is no better description for a fox than a "red cat-dog." I don't know if foxes are more dog-like or cat-like.

I never realized how many birds are named after sensual, sexy human organs. I don't want to know how they got their names.

I want to know everything about Karen's story. Who is she? How did she get this job with God? Does she like her life?

This is a very accurate description of bats, but I actually think that they perfected sleeping. If I could wrap myself in my wings and dangle from a branch, I would too.

*Creating bees* God: Make then highly beneficial to the ecosystem Angel: Sure thing, boss God: Give them the greatest knees of all time
— Krispy Memes Boi (@Krispy Memes Boi)1549391187.0

I know we've already discussed the creation of bees, but I couldn't help but include this one. Obviously, God couldn't forget to give bees fantastic knees!

Even sloths have to admit that they've got it pretty good. If I could spend a month as any animal, I'd probably be a bird so I could fly for like a day, then switch to being a sloth.

I'm pretty sure this actually was the evolutionary reason geckos developed. Oh also, they're all British.

Here's the thing: Ducks are the cutest birds. It's a bold statement, but I'm making it. You can quote me on that.

"Dolphin birds" automatically makes me think of penguins, way faster than the word "penguin." This person nailed it.

Cow bears. I love it. I love cows and I love bears. It would stand to reason that cow bears would be adorable. And they are.

You know, if you really consider owls, they are some of the weirdest animals to ever exist. Fascinating and way cool to look at, but super weird.

Some animal babies are born able to walk and do a whole bunch of other stuff, but not human babies. No, we're defenseless!

I once pet a parrot who lived in a store and said, "Hello!" every time someone walked away from him. It was hilarious and disconcerting.

I once knew a person who actually thought that narwhals were mythical creatures. We're not friends anymore.

DUMB WET GHOST. Yes. Share this with someone to make them laugh!