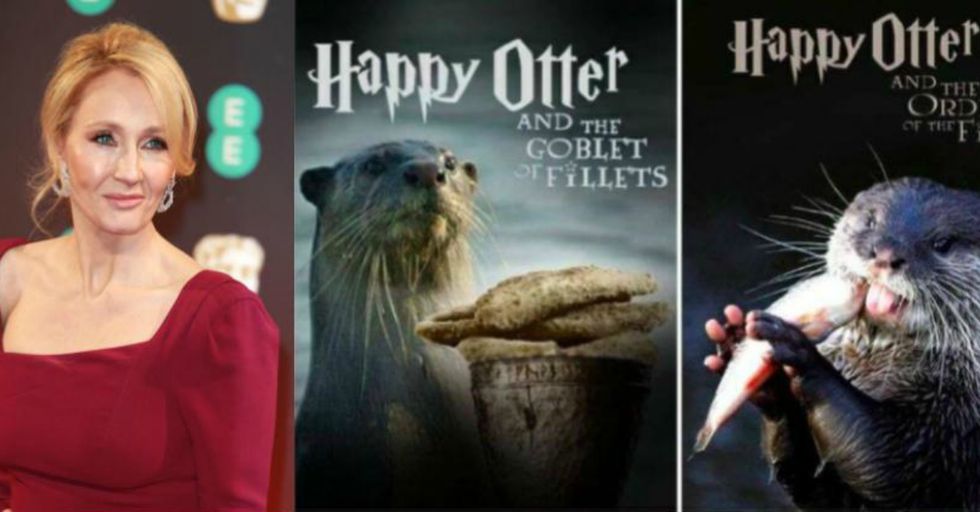 This Is What Happened When J.K. Rowling Asked Twitter for Pictures of Otters on a Bad Day

These days, scrolling through social media is often not the relaxing experience that it used to be. If you're looking for a stress-relieving break from reality, those are few and far between online. Our timelines are flooded with sad, disturbing, or frustrating news — especially recently. J.K. Rowling, who's known for her sassy and socially conscious Twitter presence, recently asked for a short respite.

Rowling understands that while it's important to know what's going on in the world, sometimes you just need to be cheered up by adorable, fuzzy animals. And when she asked, Twitter delivered a heartwarming, glee-inducing plethora of otter-worldy pictures.

It all started on September 30, when Rowling posted this exasperated tweet.

Depressed at the idea that some world leaders are too obsessed with themselves and their own world views, Rowling turned to Twitter for solace and an escape from a troubled reality. She wrote, "Incompetent clowns in power and the opposition turning into a solipsistic personality cult. I'm so ****ing depressed. Send otter pictures." Merriam-Webster defines solipsism as "a theory holding that the self can know nothing but its own modifications and that the self is the only existent thing; also: extreme egocentrism."

The thread got off to a rocky start with this cuddly cat.

She wasn't shy about making this clear.

According to a Harry Potter wiki article, otters are J.K. Rowling's favorite animal. That's why she chose an otter for Hermione's Patronus.

Thankfully, Twitter user @AprilDeGuzman followed up with an adorable video of this otter holding a precious toy.

Fun fact: Otters use rocks to open shellfish, making them one of the few mammals who know how to use tools. Even otters raised in captivity do this, suggesting that the behavior is an instinct and not something taught by their parents.

@typicallyross wanted to cheer Rowling up.

According to National Geographic, otters often float on their backs, in a "posture of serene repose." They sleep in this position, either in groups or entangled in forests of kelp. (Cuddling into kelp forests keeps them from floating away.) Keep scrolling for more delightful photos from this thread.

@typicallyross also suggested this tiny cuddle nugget. Look how small it is!

Did you know that otter moms are totally open to adopting orphaned baby otters? Zookeepers at the Monterey Bay Aquarium tried raising otters themselves, but found that the babies became so attached to the humans who brought them up that they were unable to go back into the wild. When they placed them in enclosures with mother otters, the adult females quickly adopted the little ones as their own.

Otters can live their whole lives without needing to leave the water. They also make a lot of different noises, which they use to communicate with each other.

Did you know that otters are considered a keystone species in the ecosystems where they live? They're super important because they eat sea urchins, which would gobble up kelp forests if they weren't kept in check.

In case you need a reminder: otters hold hands when they sleep to keep from floating apart. As cute as this picture is, someone was worried these cuties had sinister intentions...

@holland_tom replied, "I'm afraid they're plotting how to murder salmon."

Tom, no! Why would you ruin such a beautiful moment between two loving otters with such talk? Rowling had the perfect response.

She said, "I choose to believe they're renewing their wedding vows, Tom..."

We're not surprised that Rowling was able to come up with a better reason for these two snuggle-buddies to be conspiring so closely. She did meticulously create an entire imaginary universe, after all!

Then there's this wonderful photo of an otter and a pug sharing a special moment through the glass.

Look at their tiny paws! Look at the way they are looking into each other's eyes! They truly are "bridging the divide" as another Twitter user said, between sea-pups and land-pups. @JournoStephen's caption was nothing if not accurate: "This is what we need in troubled times such as these."

These are exactly the pictures we needed.

What could be more perfect than four pocket-sized harry (P)otter pups in a wicker basket. Are they getting ready for a ride to Hogwarts on the side of Hagrid's motorcycle? We believe so. What's your favorite otter picture?