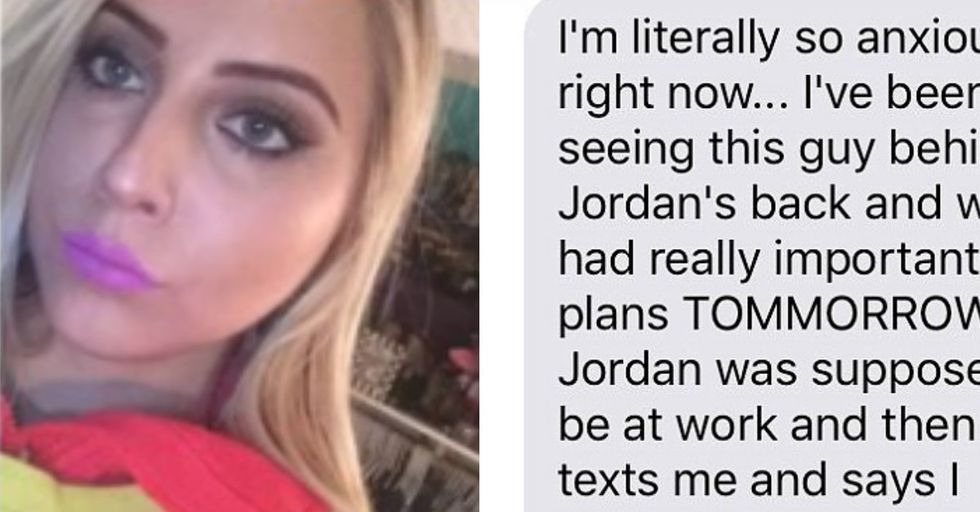 This is Jordan, the now ex-boyfriend in the story, and for good reason.

His then girlfriend of two years, Zoe, had apparently been cheating on him, unbeknownst to him.

It became clear, however, when she intended to text her friend asking for advice on how she should handle her illicit liaisons but instead sent it to Jordan by mistake.

To summarize, Zoe had planned to see her secret dude behind Jordan's back, thinking he had work, but when Jordan discovered he wasn't working, Zoe had to cancel her plans with the side dude.

Naturally Jordan, who had been working 60 hours a week to save up for them to go to Florida together, confronted her about the message.

Her defense? She told him it was about a dream she'd had, which wasn't going to fly with Jordan or anyone else with a brain.

He gave the story in detail on Twitter in a tweet that went insanely viral with more than 53,000 retweets.

People were quick to offer up their support.

But in an only-on-the-Internet twist, a random woman named Zoe was mistaken for his cheating partner after tweeting the story.

Now she's getting hundreds of messages telling her what a jerk she is, to put it mildly.

Jordan had to step in and tell people to back off — at least for the sake of this particular Zoe.

I'm pretty sure he'll leave the other one to defend herself at this point. Good thing she doesn't have Twitter.