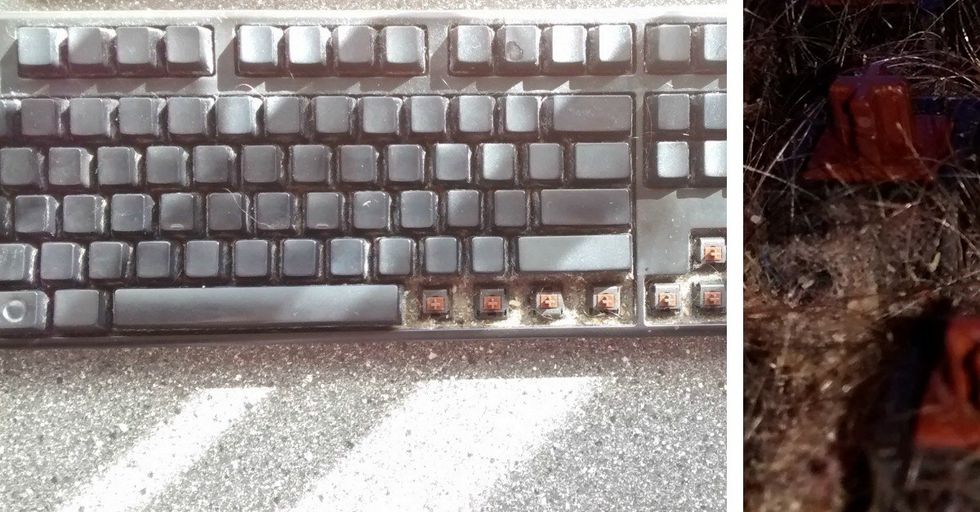 Reader beware: Some of these images are tough to look at.

If you're a fan of the “pimple-popping” genre of videos or maybe even the old Faces of Death late-night infomercial VHS tape series (and honestly, why wouldn’t you be?), we might have found our newest morbid fascination: Dirty computer keyboards!

Recently on social image sharing page Imgur, user @FilthyKeyboard (clever name) posted what seemed like it would be a fairly innocent gallery called “Cleaning Mech Keyboard for the First Time in 6 Years."

What happened next…will horrify you.

Ugh. I can tell already that is going to be a long journey...

After peeling back the first button or two, the keyboard owner begun to get a taste of what he was in for. And...it wasn't tasty, no matter how much crusty food he stumbled across.

Muck, mire, filth and flam. He had the gall to caption this picture with "It doesn't even look that bad!" Ummmmmmmmmmmm, YES IT DOES! WHO ARE YOU?!? Seriously man, just buy a new keyboard.

I feel like I've seen this in a horror movie.

Or if I haven't I want to make one: Attack of the 50 Foot Keyboard!

Did anyone else just see its heartbeat? Seriously guys. I think it just winked at me. Maybe it's time for him to buy a new keyboard.
Buy Now

Sorry, now I just vomited all over my keyboard. Maybe I should buy a new one. I hope he explains how he cleaned it up, because now I'll need to borrow his tips and tricks. Does he use compressed air? I might have to pick up some of that.
Buy Now

I really hope that this guy was a blonde. Or else we have bigger issues to worry about.

These pictures are starting to make me feel itchy.

Does anybody have a lice comb I can borrow? Or a bag that I can put over my head?

Okay, remember earlier when I said that I vomited all over my desk and keyboard? I was joking then.

This time, however, I mean it. Why did I accept this assignment again?

Okay thank goodness. Now we are getting somewhere. Let's scrub this thing.

Do to it being "compressed and greasy" (ooooh, man), he had to take it outside where he attacked it with a garden hose. Good thinking, bro.

After it's wet and wild outdoor adventure, he brought it back inside where he scrubbed the ever-loving life out of it.

Hey, it is starting to look somewhat presentable! I never would have guessed it would happen.

He then took all of the Cheeto-caked keys and tossed them in a dishsoap-filled bucket.

He made sure to mention that prior to the keys going in, the water was clear and not so...hell'ish.

From this angle, don't all of the key-teeth look like a city filled with ancient temples?

Or Mayan ruins at the very least.

Following which, he let the pieces dry for several hours.

After what he has been through, its worth taking your time. You don't want to create a new dewey, mold situation.

Upon reassembly, he realized that it wasn't just the keyboards that were in need of repair, but the board itself.

So it looks like it was time for project number 2!

That looks like it could use a good scraping.

Grab the toothbrush! It's time to go to town on the motherboard.

During this new adventure, he found a large chunk of RICE buried into the board.

Seriously? C'mon, man...you are making hackers and gamers like me look bad. I can tolerate a couple spilled cans of Code Red(r), but this is too much.

Time to lather up.

Splish, splash, I was attempted to not fry my keyboards motherboard in the bath...all upon a Saturday night!

So fresh and so clean, clean!

The keyboard may not work anymore, but at least it will have a fresh showroom shine!

Now it was time to dry it off.

And then, for reasons that I don't understand, he decided to throw it in the oven...

For real guy? For REAL?!? This looks especially bad in concept. I guess at this point there is no going back though.

Sorry, I'm from 'Murica. I can't translate this number.

But I imagine its pretty warm. Any Canadians out there want to chime in?

Oh good here is a cheat-sheet.

The guy who posted the story advised anyone who tries this process themselves (and honestly, why would you?) not to trust oven temperature gauges and to instead throw a meat thermometer in with it. Good, I will be sure to do just that.

He let it dry overnight by a fan before beginning to reassemble the board.

The bad news: All of the letters had been scrubbed and washed away. So he had to figure out where all of these faceless keys went back on shape, size and curvature. At this point, just buy a new keyboard guy. Do you need money? I've got money. Holla at your man.

Well, look at that. It works.

So after surveyed, opening, picked, brushing, scrubbing, washing removing, baking, drying and reassembling, this man's nasty keyboard is back and functional. Good for him...we guess?

If you want to relive this exciting adventure, you can read the story in the man's own words.

But now that you know what you are in for, keeping a garbage bucket handy. And let the universe have mercy on your soul.