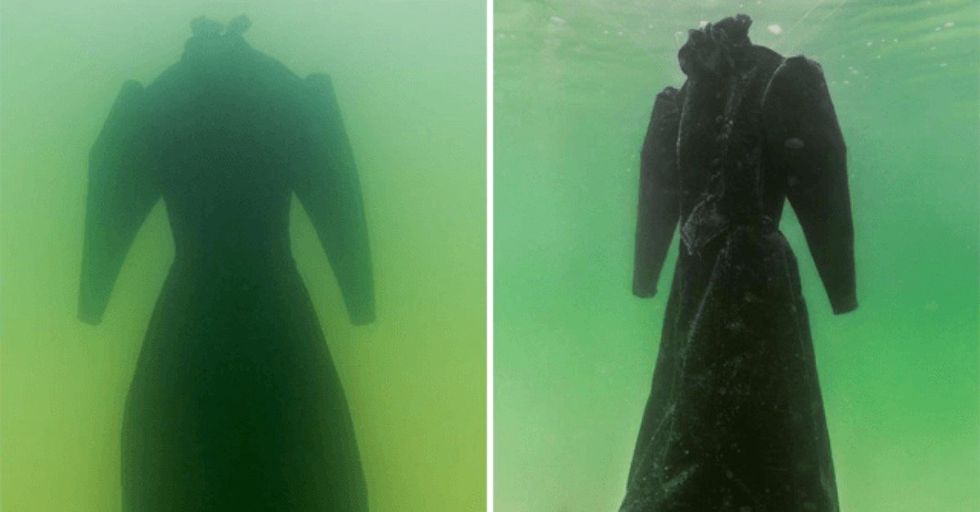 The dress was stitched with a netlike weave “that the sea would respond to," and held underwater in a structure that could support the gown as it accrued hundreds of pounds of extra weight.

Landau returned to the dress periodically to take pictures of the crystallization process and to capture its salinity-induced transformations.

After seeing how quickly the dress gets coated in salt, it's made very clear why the Dead Sea has so few living creatures in there with it.

By the time the metamorphosis was complete, the dress itself was too heavy to lift out of the water, so fragments of it still remain there.

Keep in mind that those aren't bubbles; they're salt farms.

The concept was inspired by S. Ansky's 1916 play titled The Dybbuk, in which a young Hasidic woman becomes possessed by a deceased lover's spirit, though engaged to be married into a wealthy family.

The original Salt Bride garment is a replica of the one worn in the dramatic production in the 1920s.

To me it looks like a cool frosted cookie, but then again, I'm no artist. All I know is that it is pretty amazing.

The photos from this series were on display at London’s Marlborough Contemporary museum last year.