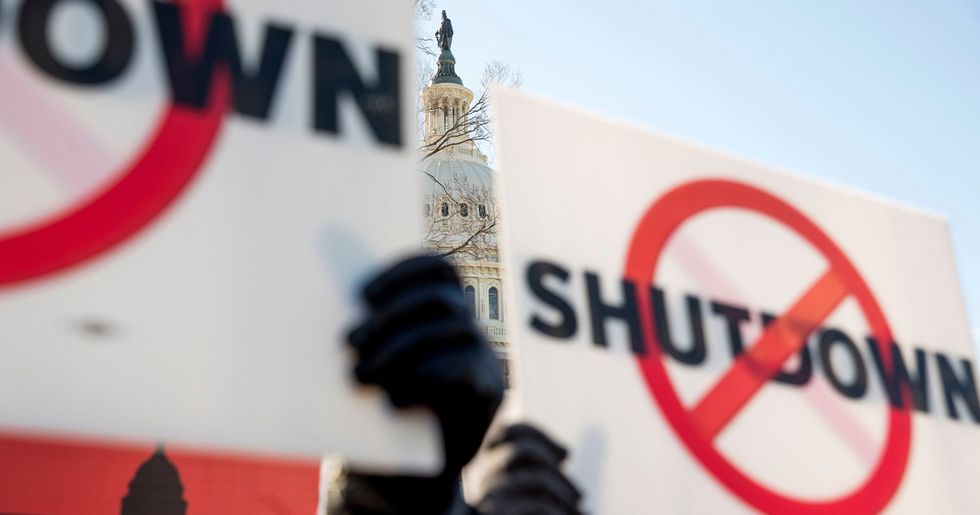 We are more than 20 days into a government shutdown. Donald Trump wants $5.7 billion to fund the building of his wall at the nation's southern border. He claims that there is an "invasion" and a "humanitarian crisis" that can only be fixed by building a giant wall to keep people out, the very same people who are attempting to seek asylum in our supposedly great country from violence and oppression.

People won't be able to pay their rent soon if they continue not being paid, and they could subsequently face financial consequences of this for years to come. It's unconscionable.

Just got a notice that I am now laid off by my small government contracting company, no back pay.. I create e-learn… https://t.co/bq57UnlNEh
— Sunny Blaylock (@Sunny Blaylock)1546799641.0

People are now losing their jobs completely and whole families are going without pay.

This game that Trump is playing is ruining families' futures. And he hasn't acknowledged that at all.

One of my colleagues has to start leaving early. Her partner works for TSA and isn't getting pd. They had to cancel… https://t.co/WtTBONaSVu
— Spring In Vegas (@Spring In Vegas)1546896844.0

People can't pay for childcare anymore. Their routines, their other jobs, their livelihoods suffer.

Many are suggesting that people who are affected by the shutdown should just "get other jobs." But many government employees are prohibited from doing so, and even if they're not, that's easier said than done.

This person should have had everything. Now they have nothing.

Politicians don't understand how many people in this country live paycheck to paycheck. They have no concept of the number of lives they are ruining.

Some went into extreme debt to secure the job of their dreams, and now they're not even being paid for it.

@amandadeibert I’m 8 months pregnant and my husband, an air traffic contoller, is working with no paycheck in sight… https://t.co/u16xmo6FLX
— Jenna Stiwald (@Jenna Stiwald)1546916271.0

It costs a lot of money to have a family in the U.S. In fact, it costs thousands of dollars just to give birth in a hospital. There's something wrong.

People like federal contractors won't get back pay when they go back to work, leaving them behind and financially unstable.

My spouse is a Fed employee who works in public safety While essential today, he was just told he might be furloug… https://t.co/6ZYX9NBuea
— Caroline Woodiel (@Caroline Woodiel)1547170681.0

Furloughed employees are not allowed to work anywhere else or file for unemployment. They are totally stuck.

Futures are ruined. Savings accounts are being pillaged. This is real.

People can't pay their bills. They have to make choices about what to pay and what to sacrifice.

#shutdownstories I am a small factory owner with government orders that are on hold, while deadlines stay in place.… https://t.co/kZSURq75hB
— Danny A Levy (@Danny A Levy)1546980427.0

This is horrendous. People cannot "make adjustments" on their rent or bills.

#ShutdownStories It's not only about paying bills, almost 1 miion employees and along with contractors are having t… https://t.co/BiOqcD8fAv
— Julie Branom (@Julie Branom)1546694420.0

No matter how long this government shutdown continues, the damage is already done. Thousands of people will be affected by this for many years.

The official number we've seen is that 800,000 people are affected by the shutdown, but it doesn't tell the whole story.

During the shutdown, with Joshua Tree National Park open but no staff on duty, visitors cut down Joshua trees so th… https://t.co/u9ffTqHW2E
— John Upton (@John Upton)1547134777.0

The national parks are staffed by government employees. When they aren't around, they can't regulate these important lands.

How do you choose which bills to pay and which to forego? There is no good option.

It's insane to me that people can be made to work at dangerous jobs for no pay. What happens if they refuse? There would be chaos. There soon might be.

I am the parent of a special needs child who receives no outside benefits because generally I make too much money.… https://t.co/sWorxXpoEw
— Robin (@Robin)1546978045.0

Many families affected by the shutdown have children with special needs who now cannot get the treatment and care they need to be getting.

Many of these government employees love their jobs. They want to be able to do them. The president is stopping them.

Not only is the shutdown causing financial problems for countless people, but it's stripping people of their purpose, and it's leaving so many without fundamental protection.

"Not for the wall"

I am a furloughed federal employee. My dog Soxy needed an urgent surgery and it will not happen. I am not rich like… https://t.co/qrLEgDCvKE
— webjibaro (@webjibaro)1546895006.0

Trump likes to make people think that those affected by the shutdown are making willing sacrifices. But most people do not agree with the shutdown and just want to get back to work.

The shutdown has been going on for three weeks. If it continues, people won't even be able to afford to get to the jobs they're not being paid to perform.

Landlords and other companies rely on rent and bills from others to pay their employees. The extent of the effect of the shutdown is extremely farreaching.

This is awful. Could you imagine taking this risk, knowing you had a stable job waiting for you only for that job to disappear?

Food safety tests and other essential services are not being performed because of the shutdown. That could mean catastrophic things for our food supply.

TSA agents, air traffic controllers, and others who ensure safe travel practices are not being paid. If they stop showing up to work, that would interrupt flights all around the world.

You can't blame them for calling in sick. People cannot afford to work for free. And they shouldn't have to.

Trump says he's doing this to protect the country, but it's clear that he doesn't really care about the people living in it. It's all a power trip. Share this with someone to raise awareness about what this shutdown is doing.