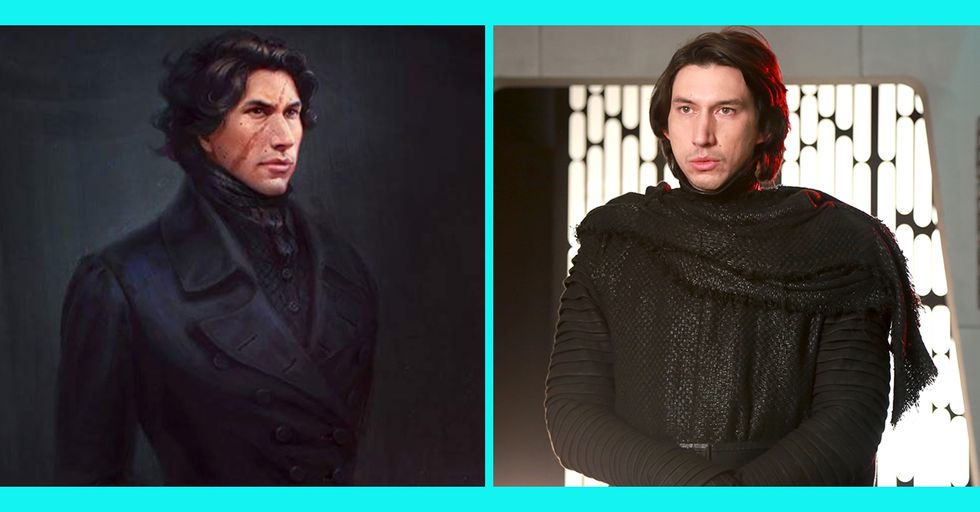 Artist TheRealMcGee is one of those digital painters whose work is literally to die for.

Since April 2012, she's been posting the most divine work across the fantasy spectrum, and her Tumblr page says that she's into Star Wars, Mass Effect, Skyrim, LoTR, etc. Basically, she's covered a wide swath of the geek fandoms, and she still has content to spare.

Take for instance, these hyper-realistic paintings she did of Star Wars.

Look at that detail. You can almost take that bag of chips and eat it. If you're not going to, we will. Just sayin'.

Or this one she did of everyone's perennial shirtless favorite – Kylo Ren.

Poor Kylo, always so shirtless. Where is this man's shirt? Does he not have one? Can't he afford one? You'd think the Supreme Leader's disciple could afford a damned shirt.

Via her Tumblr, TheRealMcGee explained how she gets her work to look so "painterly and neat."

The key, she says, is "to have the right mix of hard and soft edges and to keep the most strongly visible brush strokes to key focal areas like highlights around the nose/cheek/eye area and maybe mouth."

She explains how to achieve this using three tools.

"Mainly the paintbrush [for blending], with a rectangular-ish textured brush, relying on having the right color selected and also tablet pressure sensitivity for opacity to blend. Sometimes the airbrush, for the softest gradients on areas like cheeks."

Whatever her methods, her work is undeniably excellent.

We love looking at all her pictures. Then, in 2016, she did something even better than her usual work. She blessed us with Star Wars characters painted as regency characters.

To start off with, here is General Hux with his beloved cat, Millicent. Look at his brave expression (yes, he's a total buttface, but still). Look at Millicent's dignified sneer. Sheer genius.

We all know Rey is a badass jedi who can kick some major dark-side butt, but did you know so she could do it in a flowing dress with a chignon?

Also, did you know Regency ladies were carrying around lightsabers back in the day? True story. The Bennet sisters, Mr. Darcy, and the rest – all of them were packing major heat in the way back when.

Would you look at this – Kylo Ren as a brooding Regency hero straight out of an Emily Brontë novel.

Can't you imagine him sweeping some lucky woman off her feet as she swoons into a puddle? Then he'll look deeply into her eyes and say, "Frankly, my dear, I don't give a–" Wait, that was actually from Gone With The Wind. There we go again, mixing genres.

What about Finn and Poe Dameron – aka "Stormpilot?"

Their bromance (or is it romance, rawrrr...) continues, and both look like the beloved Tweedledum to the other's Tweedledee.

And finally, there's Captain Phasma, stalwart as ever, although she's carrying a bayonet instead of a blaster rifle.

Definitely a Regency heroine for our times. Thank you, TheRealMcGee. Thank you. Now could we bother you for some more pictures?