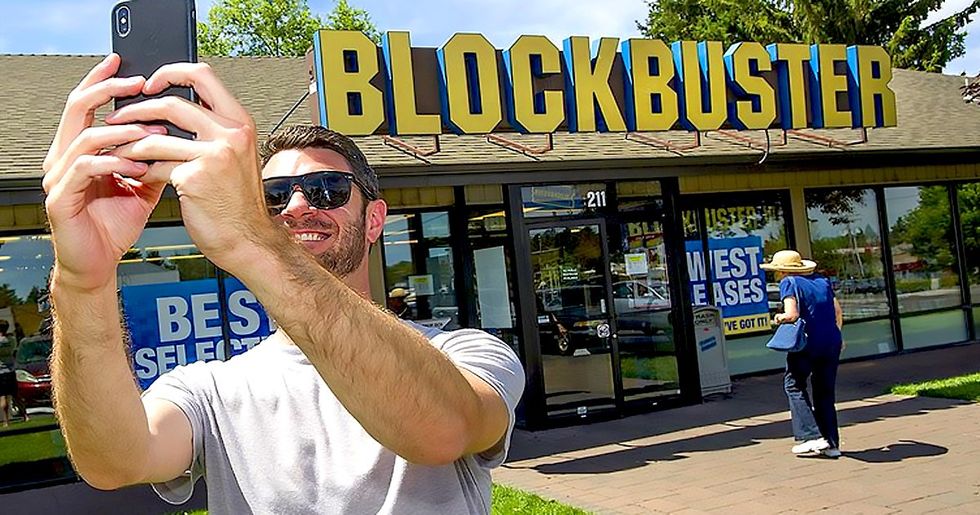 This Is What the Last Standing Blockbuster Store Looks Like

Remember the golden days of Blockbuster Video? As a nineties kid, there was nothing better than when your parents would let you go to Blockbuster to pick out the perfect movie for the evening.

At its peak in 2004, there were more than 4,500 Blockbuster stores in the US. Sadly, the company faced plenty of competition from streaming services like Netflix and Hulu, automated movie rental kiosks like Redbox and video-on-demand services. Despite all that, Blockbuster is still kicking.

Believe it or not, there is still one Blockbuster location left in the world. With the closing of Australia’s last location at the end of the month, the Blockbuster in Bend, Oregon is the last one standing. Read on to learn more about this store that’s literally the last of its kind, including why its general manager thinks it’s managed to hang on for all these years.

There were a couple of Blockbusters in Alaska that also stayed open for a long time.

The locations in Anchorage and Fairbanks, Alaska closed in July 2018.

Meanwhile, the Australia location is scheduled to close at the end of March.

That makes the Bend, Oregon location the only Blockbuster left on the planet.

Sandi Harding told TIME that she was excited to have the last Blockbuster, but that it was also bittersweet.

She was sad to hear that people would be losing their jobs.

She also told TIME, “It’s just us left, which means that we’re just that much closer to being completely gone and that’s just so sad."

The store is a blast from the past.

They still use “IBM computers from 1992" with pride.

It’s become a tourist stop in its own right.

In addition to renting movies, you can indulge your nostalgic side and buy a Blockbuster shirt, magnet, or sticker.

Russell Crowe fans, you might want to book a trip to Bend.

You can see costumes he wore in different movies.

They’ve got a hood Crowe wore in Robin Hood as well as pieces of his costumes from Cinderella Man and Les Misérables.

The Russell Crowe collection came to the store in an unusual way.

On his show Last Week Tonight with John Oliver, he bought the memorabilia for the now-closed Blockbuster in Anchorage as a joke.

He’d hoped the Russell Crowe swag would bring more interest to the store.

Jury’s out on whether it worked, since we all know what happened to the Alaska location!

Even the locals love this Blockbuster.

At this store, older films are the most popular.

Though they offer plenty of new releases, she describes classic movies as the store’s “bread and butter."

After all, not everything is on Netflix!

They’ve got a good selection of older movies that haven’t made it to streaming services.

Believe it or not, people still open Blockbuster accounts to this day.

Harding told TIME that they get “probably 5-10 membership applications a day and everybody thinks that I’m blowing that number up or exaggerating it, but I’m really not. We set up accounts every single day for new people."

She attributes the store’s success to its loyal customers.

People like to shop locally, and the novelty of shopping at the world’s last Blockbuster can’t hurt either.

It also attracts visitors eager for a nostalgia fix.

After all, for many people it’s been years since they stepped inside a Blockbuster.

It’s just the same as they remembered.

Harding told Inside Edition, "I always laugh because people come in and say, 'Oh my gosh, it still looks like a Blockbuster.' Of course it does, we are Blockbuster."

Bend’s Blockbuster has been in the same location since 1992.

It started as a Pacific Video, but become a Blockbuster in 2000.

They don’t plan on closing the store anytime soon.

In fact, their current lease is good for another three years.

A pair of filmmakers are working on a movie about the shop.

Bend locals Taylor Morden and Zeke Kamm are in the final stages of filming their feature-length documentary.

The movie is going to be a love letter to video stores.

They’re interviewing actors and comedians about the allure of video stores.

It’s also going to explore the impact a video store’s closing can have on a community.

Blockbuster was quite a big deal at its peak.

After all, why go to the store when you have thousands of options right at home?

Eventually, the company went under.

Blockbuster filed for bankruptcy in 2010.

That wasn’t the end of Blockbuster, though.

They hung on for three more years.

By 2013, the remaining 300 company-owned stores were closed.

So how is there still a Blockbuster out there?

The last store is under a franchise agreement with Dish, rather than being owned by the company.

Here’s hoping that this little shop keeps going strong for years to come.

The next time you’re in Bend, consider popping in for old times' sake. Be sure to share this story with all your nineties-nostalgic buds!