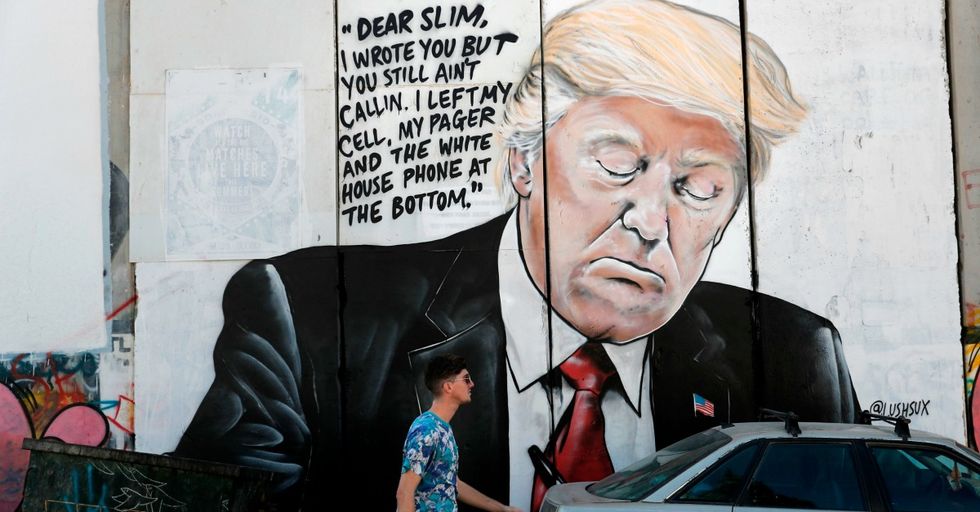 This month, we got our first look at some of the prototypes for Donald Trump's Mexican wall, which have been rushed into production to stave off a pending fiscal deadline. Builders have tried their best to create “a fence that is impenetrable.... unscalable.” That is according to Roy Villarreal, acting patrol chief at the San Diego border.

There's only one problem though, walls don't typically work, and the people who build them tend to be on the wrong side of history.

On October 17th, Trump tweeted out a video of what the proposed border wall will look like.

But before we go any deeper, let's take at look at the most famous wall in recent history – the Berlin Wall – which was built in 1961 and torn down in 1989.

Built by the Communist East Germany after World War II, the Wall was the physical manifestation of the Iron Curtain – that is, the physical and idealogical line that separated Soviet controlled states from the NATO states led by *guess who?* America.

East Germany was supposed to be a model Soviet state, but there was one big problem: the most well-educated Berliners – the lawyers, doctors, teachers, etc. – kept fleeing to democratic, capitalistic West Germany.

That didn't stop people from crossing, however.

The first escapee, 19-year-old East German border guard Corporal Conrad Schumann, jumped over a three foot high section of barbed wire two days into the wall's construction. Another trio, the Bethke brothers, famously escaped separately over the course of a decade with a floating mattress, a steel cable attached to a bow and arrow, and a small plane, respectively. All told, over 5,000 people crossed over and under the wall in the nearly thirty years it was in place.

But the Berlin Wall isn't the only recent wall that was famously destroyed.

Yes, Westoros' Wall is fictional, as is the Night's Watch that guards it, but here is another wall supposedly meant to keep undesirables out – the undesirables in this case being the wildlings, with whom the Seven Kingdoms have been warring against since time immemorial.

The Wall is 300 miles long, 700 feet tall, forged of ice and magic, and guess what happened to it?

That's right, an ice dragon blasted it to smithereens. Even though EVERYONE said it was impenetrable and that there were no such things as white walkers. Winter's here, Westeros!

Fantasy jokes aside, there are several real, concrete reasons why Trump's wall is a bad idea.

The first is that it is prohibitively expensive. Republicans say it will cost $12 to $15 billion, but conservative estimates start at 70 billion dollars  – (do you know what the US can do with that kind of money?!) – and Mexico certainly won't pay for it.

Drug lord Joaquín “El Chapo" Guzmán, for instance, created "super tunnels" under the existing wall that had elevators – elevators! – to funnel ridiculous amounts of cocaine into California. As the Washington Post explains, "The ground here... 'is like Swiss cheese.'"

Lastly, there's one important thing lots of people forget. The disputed states in which Trump's wall will be built once belonged to Mexico.

Let us turn back to our history books and remember that the United States forced Mexico into a war so it could steal Mexican territory using the concept of eminent domain. If you don't remember what eminent domain is, it is defined as "the right of a government or its agent to expropriate private property for public use, with payment of compensation." Expropriate is a fancy word for stealing, FYI.

That aside, some might argue that there is no reason for the wall.

Since the Recession, migration to America has been dwindling. Now, with anti-immigration sentiment high, and discriminatory laws in place, people simply don't want to come to America anymore. One Tijuana policeman said it best. “For me, they should make it [the wall] even taller, so the crazies, like in Las Vegas, don’t come over here. I’m serious. The danger is over there."