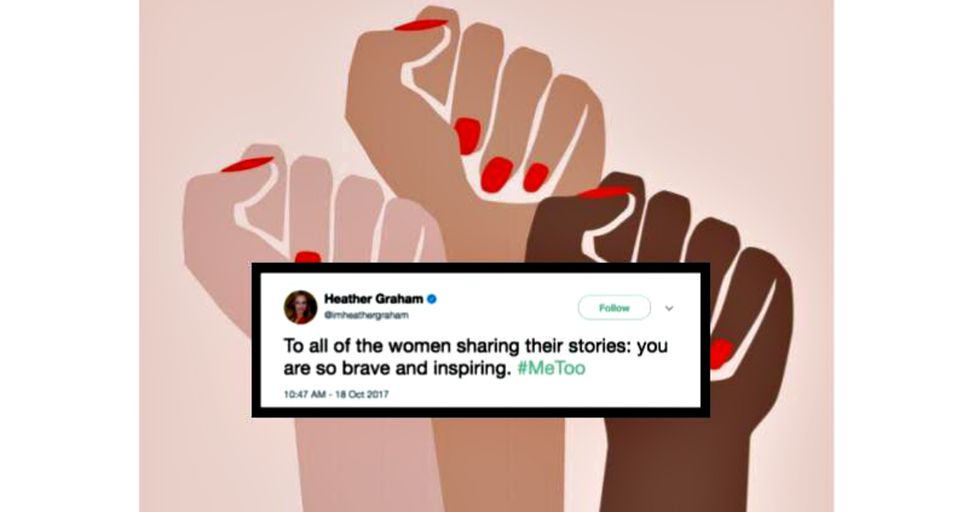 According to RAINN, an American is sexually assaulted every 98 seconds. If that sounds like a lot, it's because it is. In the midst of a rash of sexual assault and harassment allegations taking over Hollywood, this week survivors are taking to social media to show how prevalent, and close to home, the problem really is.

Tarana Burke started a social media movement ten years ago that this week had all the world talking.

The Brooklyn-based activist works as the program director for Girls for Gender Equity, an organization dedicated to empowering women of color. Burke talks about listening to a young girl's story of sexual assault on the organization's website, and how her reaction to it inspired her to encourage victims to speak out together to promote mass healing.

It really took off this week when celebrity Alyssa Milano tweeted about it.

The Charmed actress shared the suggestion that any woman who had been sexually harassed or assaulted should tweet "Me too" in response, in order to show the magnitude of this problem.

And she herself even took part.

Announcing you've been harassed or assaulted isn't easy, but the star's willingness to open up about being a victim set the stage for others to come forward. Some of the participants were surprising.

Anna Paquin also tweeted "me too" in response.

The star of True Blood and X-Men won the Academy Award for Best Supporting Actress at age 11, making her the second youngest person to ever win the honor. But apparently she too has a been a victim of assault or harassment.

Adding to the chorus of household names admitting they'd been victimized, the Will & Grace star retweeted Milano's tweet with her own admission. And as the numbers of highly visible participants grew, other victims became emboldened to speak out.

Proving gender offers no protection from being victimized, Javier Muñoz, the well-known Broadway actor and current star of Hamilton, came out as a survivor. He even noted he'd been through it multiple times.

Some went into more detail and it was horrifying.

One user shared a terrifying story from childhood that made us rethink the schoolyard — it isn't always a safe place. And showed that these abuses can happen at any time, anywhere.

They're also rarely punished as they should be.

@Alyssa_Milano The boys barely got a slap on the wrist but I was socially ostracized because I "couldn't take a joke."
— JustCate (@JustCate)1508099370.0

Even when the victim is a child, our desire to just move past things like this, maybe out of our own discomfort, can leave victims feeling alone. Or even lead their communities to turn their backs on them. Shining light on this is exactly why "me too" was so powerful.

Women pointed out how harassment is so common, it feels like getting off easy.

While it might seem odd to include both victims of harassment and assault in the same movement, the two crimes have a lot in common. They're both usually about power, although victims of harassment sometimes feel like they don't have anything to complain about if they weren't assaulted. This mindset can give harassers leeway to continue, or even escalate, their crimes.

Burke was proud to see her creation making such waves.

The activist clearly made the difference she'd hoped to, by showing victims they aren't at all alone in their experiences. And she went on to say that the movement is far from over.

"Me too" is just the first step.

It’s beyond a hashtag. It’s the start of a larger conversation and a movement for radical community healing. Join us. #metoo
— Tarana (@Tarana)1508109721.0

Burke announced that this isn't simply a day to join a hashtag, it's the beginning of a conversation about why sexual assault and harassment is so common. It's also a call for victims and communities to start the healing process. Thanks to activists like Burke, and the victims who have shared their stories, this movement is just beginning.