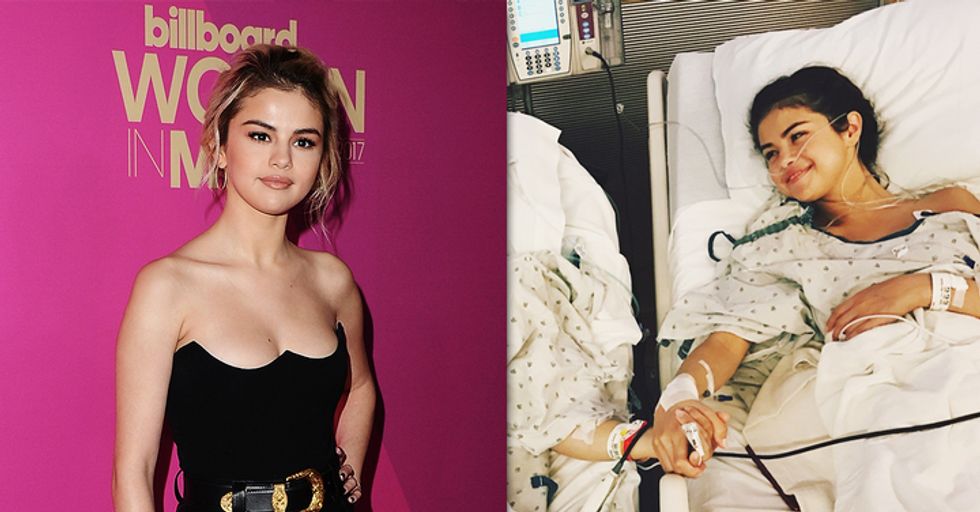 Selena Gomez won the Woman of the Year award last night at the Billboard Women in Music Awards.  She was teary-eyed as she accepted and was almost too overcome with emotion to speak. "I think Francia should be getting this award," she said, "because she saved my life."

She also gave Selena one of her kidneys this year, when Selena was in desperate need of a transplant. Francia said that she didn't know that Selena was two weeks away from kidney failure until after the surgery was over.

Gomez has Lupus, which is a chronic autoimmune disease.

According to the Lupus Foundation of America, Lupus "can damage any part of the body." People with Lupus aren't able to fight off viruses, germs, and bacteria properly.

Selena's fans noticed that she hadn't been very active with her music earlier this year, and Selena finally spoke out about it after her surgery.

She posted this photo on Instagram, explaining why she had been so quiet. She wrote, "I found out I needed to get a kidney transplant due to my Lupus and was recovering. It was what I needed to do for my overall health. I honestly look forward to sharing with you, soon my journey through these past several months as I have always wanted to do with you."

"Until then I want to publicly thank my family and incredible team of doctors for everything they have done for me prior to and post-surgery," she continued.

Finally, Gomez wrote a heartfelt thank-you to her dear friend. She said, "And finally, there aren’t words to describe how I can possibly thank my beautiful friend Francia Raisa. She gave me the ultimate gift and sacrifice by donating her kidney to me. I am incredibly blessed. I love you so much sis. Lupus continues to be very misunderstood but progress is being made."

Raisa said that the experience was difficult but also a bonding experience for her and Gomez.

She said, "Just seeing my friend get sick, and more sick, and more sick was hard but at the same time so positive for our friendship," she added. “It got us closer but I also learned so much this year about myself. It was a very humbling experience."' Selena went on to say more about how she felt about getting her award.

She said, "I think right now, especially, with everything going on in my industry, it's empowering to see the voice that women have right now."

She opened up about her difficult year and how much she thinks she's changed.

Gomez said, "I feel like, if you're still, there's not really a lot of change," She continued, "And I'm somebody that constantly likes to grow and feel like... what could I be better at? I like to choose to live my life in a way where... I want to be weight-free. I think it is important to go through your life the way you want."

In Gomez's acceptance speech, she also thanked her team and her family for sticking with her through tough times.

She said, "I'm reminded by a team of people who believe in me, even when I don't myself, that I couldn't be luckier. But I don't feel more proud... I've never felt more proud to be a woman in this industry than I do today."

Finally, she thanked the woman who came before her and paved the way for women in music today.

"I’m so grateful for the older women who have lifted all of us up because I couldn’t be here without any of you," she said.

All in all, she made it clear how grateful she was to be in her position with the ability to keep making music.

"Honestly, I couldn’t be more grateful for the position I’ve been given in my career from seven to 14 to now," she said. “I want people to know I respect the platform that I have so deeply because I knew that I wanted to be part of something great and I wanted people to feel great." For more information about Lupus, check out the Lupus Research Alliance.