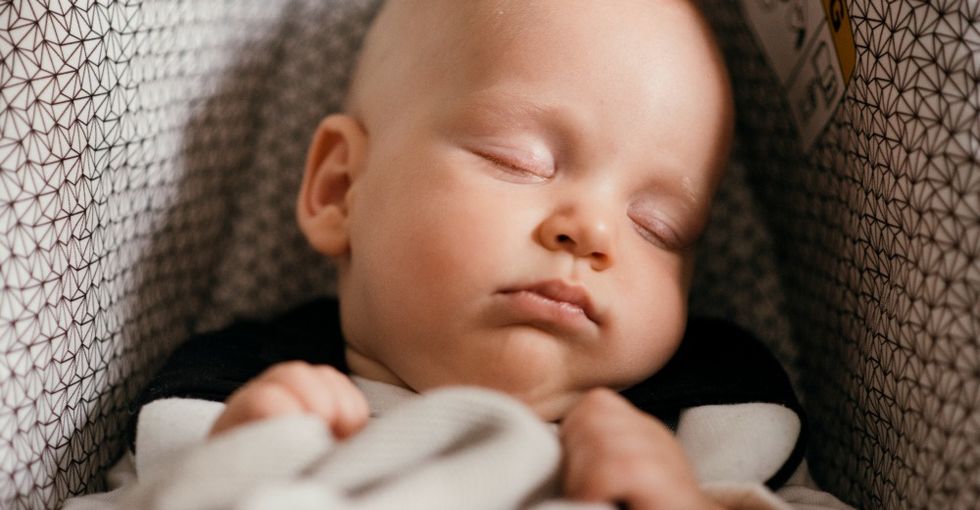 Every parent of small children knows firsthand how difficult it can be to get your kid to fall asleep and stay asleep for an extended period of time. Some infants simply cry constantly for their first six months of life, and any type of quality shuteye becomes a distant memory for exhausted Moms and Dads. While there are a lot of tips and tricks for getting your little one to go down (ever heard of squatting with your baby?), one popular method has recently been a cause for concern for medical professionals and researchers alike.

A recent study exposed the very real dangers that come with letting your infant sleep in their car seat when not inside a moving vehicle. Keep scrolling to find out why this popular sleeping location can prove fatal for newborns, and what to do instead.

This might be the most important article you ever read.

For new parents, getting your infant to fall asleep (and stay asleep) is a constant struggle.

In fact, most parents are so sleep deprived and desperate that they'll do just about anything to get their baby to go down so they can finally catch some Z's themselves.

When you're about to become a first-time parent, suddenly, every seasoned Mom or Dad is offering you their own tricks for getting your little one to sleep.

Some of these methods seem pretty straightforward, while others are pretty out there. "Try it once and you'll be amazed at how much sleep you'll get," they always say. So just what are these supposedly foolproof methods?

One that I've heard multiple times since I first became pregnant is to "avoid eye contact".

Apparently, extended eye contact causes your little one to become stimulated, so it's best to completely avoid it when you're putting your baby to sleep. Of course, this might also make your infant feel like you're mad at them about something and just being passive aggressive, which could keep them up all night wondering what your deal is.

Another common one is to bust out the vacuum.

One Mom told me that the only way she could get her infant daughter to go down for a nap was to vacuum outside her room for 5 minutes after putting her down. I don't know how effective this is, but it is a great way to find the motivation to actually clean your house. Or, at least that one spot outside the nursery.

One woman at the grocery store recently told me about the benefits of squatting with your baby to induce sleep.

"I know it sounds weird, but I used to hold my son and do a few deep squats and he'd fall asleep in my arms immediately every time." Even if this didn't work, just imagine how fabulous your glutes would look after about a week of using this method!

Someone once told me to use the cold to your advantage.

In the dead of winter, one woman's husband would step outside with their newborn and the cold air on her face would instantly lull her to sleep. Obviously, you'd have to bundle your baby up first and only works if you live somewhere like Wisconsin where we're all part Eskimo once the temperature drops.

Fans are your friend.

Sure, white noise machines are commonly found in nurseries, but apparently, the combination of low, dull noise and gentle breeze from a box fan equals a one-way ticket to slumberland.

Of all the advice I've heard lately, the car seat trick is by far the most common.

Basically, this trick involves putting your infant in the car seat and taking a drive around the block a few times until they've completely conked out. Then, simply take the car seat out of the car and let them sleep in that for a few hours.

While this can be an effective method for getting stubborn munchkins to sleep, you might want to rethink trying this one out for yourself.

A study was recently published in AAP News that sheds some disturbing light on this popular parenting trick.

The study was conducted over a 10-year period.

It involved the investigation of the sleep-related deaths of 11,779 newborns. Of those deaths, 3% had one thing in common.

They all happened when they were placed in "sitting devices".

Of those deaths, 64% happened while infants were placed in car seats.

And of that 64% percent, 90% of deaths occurred when the car seat was not being used for its intended purpose, meaning it was placed outside the car instead of secured inside it.

Dr. Jeffrey Colvin, the author of the study, discussed the results and urged parents to stop allowing infants to sleep in car seats when not on the road.

“It really appeared that the deaths in these car seats occurred in the context where the car seat wasn’t being used for its purpose in transporting a child, but instead it was being used as a substitute for a crib or bassinet," he told TODAY.

“But they aren’t as safe as a crib or bassinet when the child is out of the car and sleeping," he continued.

"There’s a lack of awareness (about this). I think every parent, including myself, has been guilty of doing this at one time or another."

The surprising thing about the study was that the reasons behind the deaths are still unclear.

Researchers are still not 100% sure why a crib or a bassinet is a safer option than a car seat, stroller, or swing, although there are some theories.

Dr. Colvin thinks it may have something to do with the sleeping position.

When babies are put in a crib or bassinet, they sleep on a completely flat surface, versus a more reclined position when placed in a swing or car seat.

A similar study was conducted in 2015 that uncovered similar results.

The Academy of American Pediatrics found that allowing infants to sleep in car seats when not in a moving vehicle puts them at a higher risk of asphyxiation.

One Mom found this out the hard way.

On June 10, 2015, Lisa Smith received a phone call that every parent dreads: Her daycare provider was trying to wake up her one-year-old daughter Mia from her nap, but found her unresponsive. Where had she fallen asleep? Her car seat.

Although she rushed her to the hospital, it was too late.

She had died from positional asphyxia.

“Positional asphyxia is when the baby’s sleeping position prevents him or her from breathing adequately," she told Today. “When a car seat is in the car, it’s reclined at 45 degrees. This allows the baby’s head and neck to rest backward so that it’s not slumped forward and blocking the airway."

Doctors told her that Mia had most likely slumped down in the car seat and fallen asleep in a way that restricted her breathing, causing her to suffocate.

“This was our beautiful little girl. Perfectly healthy in every way," she said in an interview with TODAY.

“When they [doctors] came in and told us that she didn’t have any more brain activity," said Smith, “all I did was I turn to the doctor and said, ‘I know.'"

Smith shared her story in hopes of educating other new Moms and Dads so a similar tragedy doesn't happen to them.

“Losing a child, it’s beyond soul-crushing," she said.

“The hardest part is that this was so easily prevented. And we lost a daughter needlessly. No family deserves this."

When she sees other parents in public with their babies sleeping in car seats outside of their vehicles, she makes a point to say something to them.

“I say, ‘You know, I had a daughter who was seventeen-and-a-half months who passed away and I just want you to be really careful.'" she told the Dallas BC news affiliate WFFA.

“How many parents do you think might not know this?" she added.

“There’s nothing about the car seat that’s designed [for] sleep," she said. “Of course, if the straps aren’t tight, the child can kind of slump down."

So what can parents do with this information?

Should you be worried that your baby will fall asleep every time you take them for a ride in the car?

According to Dr. Colvin, don't fret if your infant falls asleep while your car is in motion.

This is what car seats were designed to do, so as long as the car seat is actually inside the vehicle, there's no reason to be concerned.

“The car seat is where infants should be always when they’re traveling and it’s the absolute safest place for that infant to be, whether they are awake or asleep," he said.

“But you just have to remember that car seats are for cars and when you get out of the car, the safest thing to do if your infant is still sleeping would be to put them in a bassinet or a crib."

So while this may not be welcome news to parents who use their car seat as a foolproof way to get their kids to nap, it may help save the lives of countless infants.

When all else fails, there's always the vacuuming method.