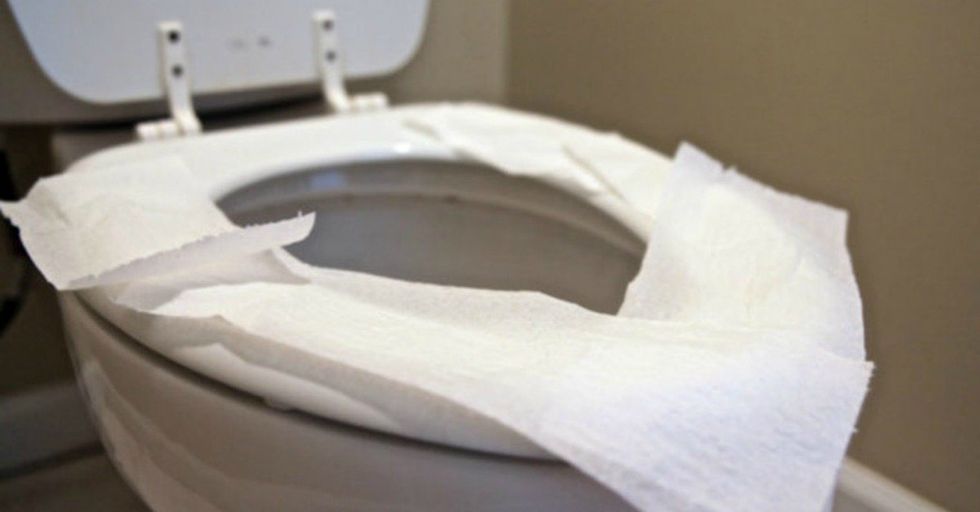 Everyone has their own unique ways of avoiding germs in the bathroom. But did you know that something you've been doing in public restrooms for years to stay clean may have the exact opposite effect you're looking for?

If you're even slightly germaphobic, you're gonna want to read this.

Using a public restroom is always a bit of a gamble.

You never know what nightmare you might be walking into or how diligent the custodial staff is, and for those obsessed with avoiding germs, it can be a downright horrifying experience. If you struggle with "going" in public, you're not alone.

Luckily, there are go-to moves that pretty much everyone is guilty of doing.

There's the tried-and-true foot flushing method, which completely eliminates the need to touch a repulsive toilet flusher which no doubt is home to a plethora of unspeakably disgusting bodily fluids. This method may be more common than you think.

The Bradley Corporation, manufacturer of bathroom fixtures, recently conducted a study on how Americans flush.

After surveying roughly a thousand people, they discovered that 64 percent of people press the toilet flusher with their feet instead of their hand when using a public bathroom. That's a LOT of germaphobes.

That brings us to another obstacle to tackle: the seat.

Luckily, many public restrooms offer disposable seat covers that protect you from unknown ickiness. But what do you do if there are no toilet seat covers available? Besides scream in terror, that is.

When faced with the dilemma, the solution might seem obvious — cover the seat with a few pieces of toilet paper so you at least create a barrier between your body and all that nasty bacteria.

Well, it turns out that it might not be as simple as that, and in fact, that's not the best approach at all. People assume that toilets are covered in bacteria, but the actual seats themselves are cleverly designed to not pick up any.

Their deliberate curve and smooth surface prevents bacteria from sticking around, so they’re rather safe to sit on.

Germs cannot multiply on bare skin alone, so don’t expect to get sick from sitting on a dry public toilet seat (key word being "dry," of course). So where are all the germs?

Right where you'd least expect them:

On the toilet paper. We know, this is probably coming as a pretty big shock. Just give yourself a minute to process the fact that everything you thought you knew about germs was wrong. We'll wait...

Have you calmed down yet? Alright. Let's proceed.

Unlike toilet seats, nothing else in a bathroom stall is designed to prevent bacteria from sticking to it. Germs get spread all around the stall when we flush the toilet. They latch onto the walls, the door handle, the toilet paper dispenser, and, of course, the actual toilet paper.

When you lay down some paper, pick it up again when you’re done, and then probably touch your face, you’re likely exposing yourself to more bacteria.

So what if you're not so into the idea of sitting where tons of strangers' butts have been and there are no toilet seat covers left?

Squatting is pretty much your only option. But even if this method is a bit less comfortable than sitting, at least you'll work out those glute muscles!

Check this video out for all the dirty details. Just a heads up, you might want to wait until after lunch to watch it. But maybe before your next bathroom break.