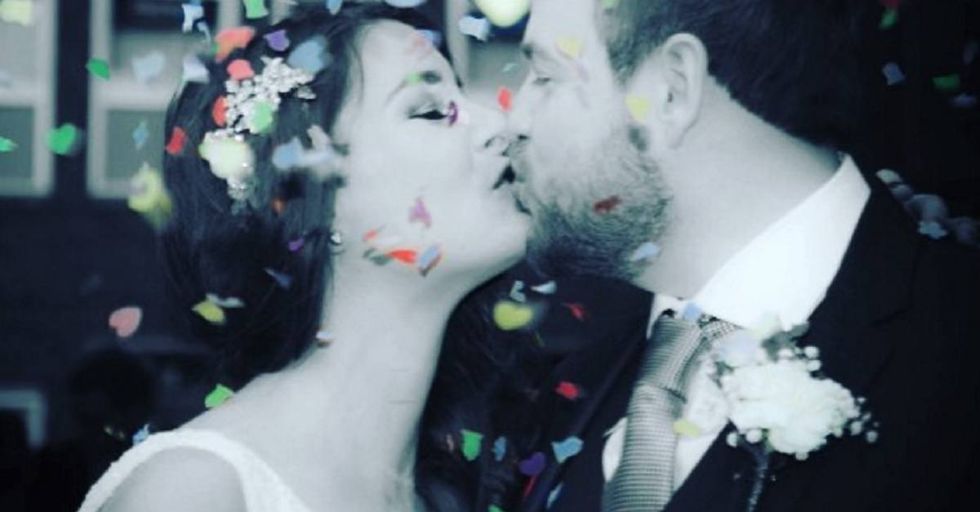 This Jilted Bride Ended Up With the Most UNLIKELY Groom Ever

Katy Colins thought she had it all, until a brutal wake up call set her on the most unlikely path.

Just a few years ago, Katy Colins thought she had it all: a great PR job, a house, a car, and she was engaged to her college sweetheart.

Then, three months before their wedding, Katy’s fiance called it off by confessing an affair, leaving her jilted and heartbroken. And while my first instinct in that situation would be to retreat to my mom’s basement to live out my days with a series of cats, Katy didn’t let her story end there.

She decided to quit her job, sell her house and car, and head off on a backpacking adventure around the world.

She started the Instagram account @notwedordead so family, friends, and I’m assuming all her most gossip-loving frenemies, could keep up with her journey, but it quickly caught the attention of a much bigger audience.

Katy’s story started making headlines as she was dubbed the “backpacking Bridget Jones" by media outlets.

One of the first journalists to break Colins' story was John Skiddle of the Liverpool Echo. A man she’d coincidentally met in her journalism program in college, but hadn’t spoken to in years. You see where this is going, right?

As Katy traveled the world, John helped her navigate her newfound fame from an insider’s perspective. And they probably laughed a lot and then accidentally held hands a few times.

As Katy wrote on her website, “He became my rock when the tabloids magnified (and in some cases, distorted) my break-up, he cheered the loudest from the sidelines when all three of my books were released and he gets me." (Insert sound of me screaming for a full 15 minutes.)

Katy and John fell for each other. They then moved in together, and it wasn’t long before John popped a question Katy was familiar with.

And even though she’d been jilted only a year before, she felt ready to make the leap with her new love. But she soon found out that wasn’t the only leap they’d be making.

Katy’s original wedding was slated to cost a staggering £25,000.

But for her wedding to John, they wanted to keep things simple. Which is just another word for “less than an entire year’s salary." As Katy writes, “Our outfits would be from the high street, rings haggled for in the Birmingham jewelry quarter, no bridesmaids or ushers to dress, simple flowers from the local florist, my mum’s friend baking the cake, own hair and make-up, and family members acting as photographers. We organised it within six weeks and in the run up to the big day it was pure excitement instead of cold feet or nerves."

Their ceremony took place in the local registry office, with a reception at the local pub.

The couple weren’t just motivated to scale down by a desire to have a “no-stress" wedding, but they also found out they had something much more important to spend their money on.

Not long before the wedding, Katy discovered she was pregnant with their first child.

Katy gave birth just last week to the couple’s daughter, Everleigh Gray. The couple excitedly welcomed their new arrival on Katy’s blog, noting their daughter already has a passport. But now that you know their story, I bet you won’t even be able to get mad when this baby is on your next flight.

Now, as a published author who has built a whole new life, she hopes her story will continue to inspire others facing a major loss.

“Time really does heal, no matter how utterly irritating that well-worn cliche is," Katy writes.

Through this truly epic journey, Katy has written about the lessons she’s taken away, namely that “You’re given what you need the most when you least expect it."

Katy writes that “Back then wasn’t my time to become a wife or mother, before either of these things happened I got to selfishly indulge myself." Which is all the proof I need that one can both find happiness, and eat burritos for dinner every night. Hear that, Mom?

Lady Gaga's $500,000 Reward for Her Stolen Dogs Labeled as 'Irresponsible'