Guy Mansplains Why Women Shouldn't Wear Their Engagement Rings to Job Interviews, and It's as Bad as You Think | 22 Words 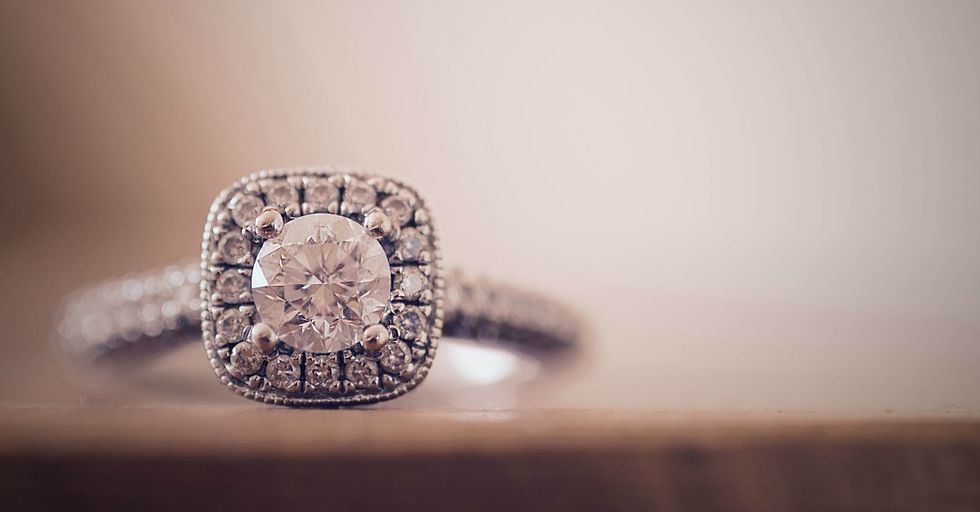 Guy Mansplains Why Women Shouldn't Wear Their Engagement Rings to Job Interviews, and It's as Bad as You Think

Ready to be outraged? In a now-viral Linkedin article, a man named Bruce Hurwitz gave women everywhere the workplace advice no one asked for. His tip? Don't wear your engagement ring to an interview.

Why, you may ask? Brace yourself, because Hurwitz's reasoning is probably even worse than you're imagining.

Job interviews can be a nerve-racking experience.

You're eager to make a good first impression, and you try to present the best image of yourself so potential employers will see you as an asset to their workplace. Picking out an outfit, styling your hair, and agonizing over the right pair of shoes is pretty typical for both men and women.

So when recruiter Bruce Hurwitz wrote an article with what he felt was a crucial tip for nailing an interview, people listened.

That is, they listened until the sexist garbage that the article consisted of started to become very, very clear. It all started somewhat innocently enough.

Hurwitz titled his groundbreaking article, "When interviewing for a job, lose the ring!"

You might think to yourself, OK, maybe he's going to say that wearing an unnecessary amount of gaudy jewelry to an interview can be distracting to employers, and it's best to keep your look simple. If only that were it.

"Years ago I was working for a recruiter. A colleague interviewed a woman. I was not present during the interview. When they left the conference room the woman asked my colleague, 'You know, I have had a number of interviews and no offers. Did you find anything wrong with my interviewing skills?' My colleague assured her that she had not."

"Even though I had not been introduced to her, and despite the fact that, at that moment, I was alone with five women all of whom were wearing engagement rings, I said, 'Lose the rock!'"

"Everyone looked at me. The woman had the Hope Diamond on her finger. She, and my colleagues, asked for an explanation," wrote Hurwitz. And then things started to get REALLY infuriating...

"When a man sees that ring he immediately assumes you are high-maintenance," Hurwitz continued.

"When the woman at the office who has the largest diamond on her finger, sees that ring, she will realize that if you are hired she will fall to second place and will, therefore, not like you.  Lose the ring!"

Hurwitz goes on to say that the woman initially seemed (rightfully) offended.

However, two weeks later he received a call from her stating that he was — drumroll please — completely RIGHT! It turns out, all she had to do was remove her engagement ring and suddenly the offers came soaring in.

Hurwitz ended the piece by perhaps even topping his previously sexist claims.

"So lose the rock!  And, if you don't have one, but got engaged by signing a pre-nup, find a way to let male interviewers know that. They'll respect you. (Women may as well, but I'm not certain that this is the case.)" Okay, let's unpack some of these wildly offensive statements.

First off, the whole idea of a man telling a woman how to behave in any scenario is so tired at this point.

Making the blanket statement that a man sees a woman as "high-maintenance" for wearing an engagement ring is beyond ridiculous. Not only is this something the author is injecting based on his own prejudices, it also reinforces the cliched idea of people making unfair assumptions about a woman based on her appearance. And it needs to stop.

If you reverse this idea and consider it applied to man, it's downright laughable.

Writer Prachi Gupta's made this spot-on point in her sizzling takedown of Hurwitz's piece in Cosmopolitan: "Can you imagine a recruiter telling men to ditch their wedding bands because they look 'too expensive' and will thus immediately disgust all the ladies in the office?" Why is it a woman's job to go out of her way to prevent men from making these types of sexist judgments? Instead of telling women not to wear their beloved pieces of jewelry, perhaps Hurwitz should be calling on male hiring managers to stop making these types of stereotypical observations about their female candidates?

Oh, and by the way, the whole notion of a woman being threatened by another woman's ring size is disgusting.

Making the absurd claim that women will dislike a coworker based solely on the size of their ring, out of fear of falling to "second place," is extremely insulting. While Hurwitz claims to be an expert on the subject, 100 percent of his knowledge of "women in the workplace" seems to have come from watching reruns of Mad Men. Rock the rock if you want to, ladies. If a hiring manager can disregard your skills, personality, and years of experience because of a piece of jewelry, trust us, you don't want to work there.