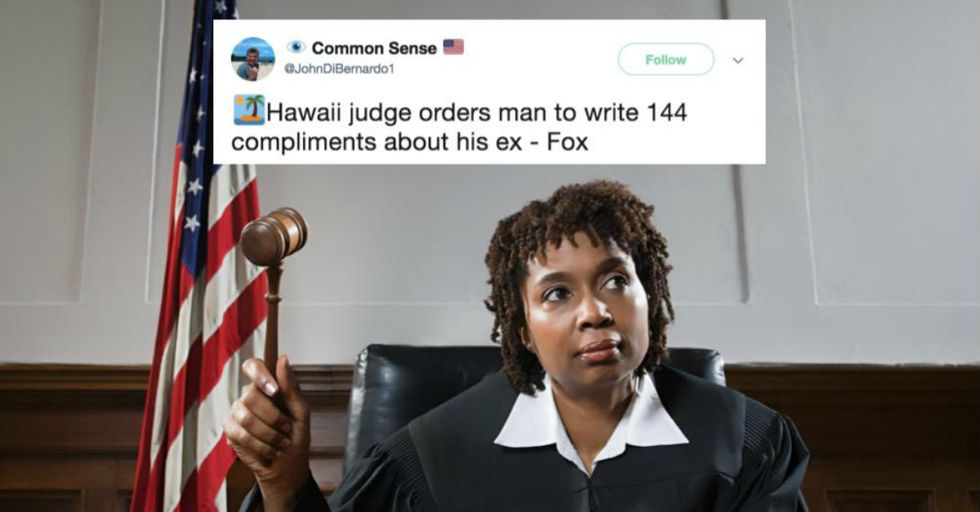 If you had to write 144 messages to your ex, we're betting they wouldn't be compliments.

But that's exactly what one man was forced to do after a judge sentenced him to write over 140 "nice" notes to his ex-girlfriend.

Think that's cruel and unusual punishment? You might not after hearing what he's guilty of.

Breakups can be hard.

More often than not, both parties are left with a wide variety of feelings, which can range from slight resentment to straight-up contempt. For many, the idea of remaining "friends" with their ex is downright laughable.

Some people never recover from the impact an ex has left on their life.

So when a judge ordered 30-year-old Daren Young a somewhat unique punishment for violating a protection order, he was most likely less than thrilled. Young, a resident of the Hawaiian island of Maui, pleaded no contest to contacting his ex-girlfriend 144 times through text messages, calls, and voicemails over the span of three hours. His fingers must have been pretty darn sore after that marathon texting session.

And, you guessed it, these texts were anything but nice.

So on Friday, November 3, Judge Rhonda Loo gave Young a punishment to fit the crime. Along with two years of probation, $2,400 in fines, and 200 hours of community service, Young would need to write out 144 "nice" things about his ex-girlfriend, the same amount of hateful texts he sent and voicemails he left.

“For every nasty thing you said about her, you’re going to say a nice thing," said Second Circuit Judge Loo.

“No repeating words." Writing 144 compliments about someone you actually like would be tough enough, but an ex? Almost impossible.

Loo made her feelings about Young's actions quite clear during sentencing.

“I don’t know whether I should cut off your fingers or take away your phone to get you to stop texting," Loo told Young. “You probably shouldn’t get a phone, period. I hope she changed her number." We're guessing this little homework assignment will make Young think twice about ever contacting an ex again. “It’s so childish to think a grown man can be so thumb-happy," Loo added. Touché!