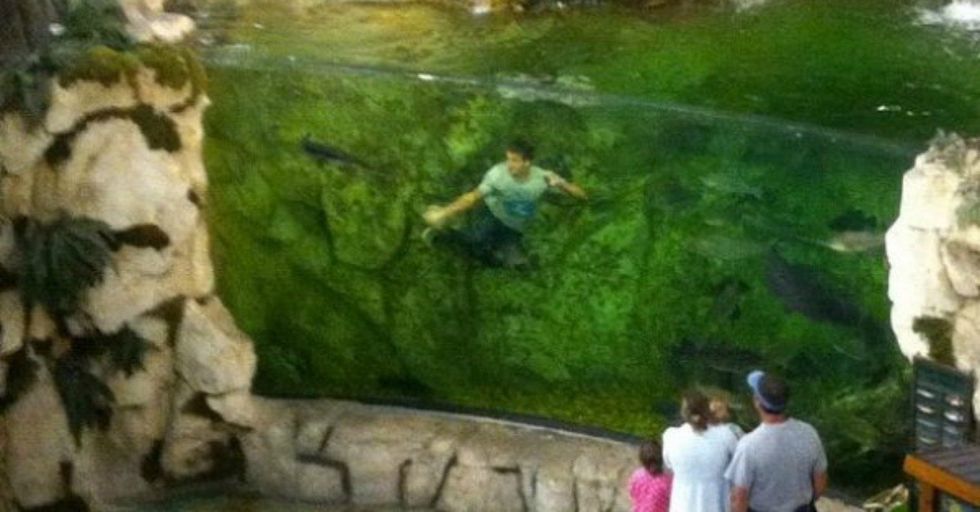 In late April 2017, a teenager jumped off a 30-foot ledge into the fish tank of the Bass Pro Shops store in Denver, Colorado.

What seems like a one-off dumb prank, though, is actually a dumb prank in a long line of very similar dumb pranks.

Poor, innocent Bass Pro Shops. The giant outdoor gear mecca has locations all over the U.S.

And they're more than stores. They're experiences. They're oases of fishing poles and camouflage pants. Shopping at a Bass Pro Shops is more akin to a walk in the woods than a trip to the mall. One thing that makes Bass Pro Shops stand out are the giant fish tanks in many of their locations. Real fish swim by while you pick out the hooks with which you will eventually snare them. (The symbolic "them." They don't let you actually fish in the fish tanks.) Nor do they let you jump into these fish tanks. But it seems some people, generally young, white men (surprise, surprise), have missed that memo.

A Denver teen recently landed himself belly-first in the fish tank of the city's Bass Pro Shops location at Northfield Stapleton.

The kid, whose identity remains unknown, injured his head, bumping his skull on the aquarium rocks. There's no word on his condition so far, but he was not taken to the hospital. According to The Denver Post, he may face charges if there was any damage to the tank or the fish.

After the fateful leap, the store released a statement that said, "A teenage minor attempted to enter our aquarium as part of an intended prank. Our associates and security team quickly addressed the issue safely and without incident."

via: Our Community Now

Correct me if I'm wrong, but this picture seems to make it clear that not only did a teenage minor "attempt to enter" their aquarium but he actually accomplished it pretty squarely.

Other customers at the store who witnessed the prank weren't having it.

via: Our Community Now

One told Fox 31 in Denver, “It’s kind of stupid. “Why would you jump in?" Another wise soul stated, “You should have the level of mental development to understand, hey, this is not a good idea." Hm. Fish food for thought. While not jumping into a giant live fish tank in a store seems like common sense to many, apparently this has been going on for years. And there's the video footage to prove it.

Videos of teens jumping into tanks at Bass Pro Shops locations around the country, like this one, have been popping up on YouTube since 2008.

At least this kid wore a life jacket...right?

This kid full-on cannonballs into the water.

Luckily, it doesn't seem like any fish were harmed in the making of this stupid prank video.

This genius does the deed then decides to exit the tank in the most obvious fashion.

Although, anyone walking around a Bass Pro Shops dripping wet will be a little suspicious. Unless you (pro tip!) wear camouflage, of course. Then, no one will see you.

We might have lost some fish on this one.

You can see the elk in the corner of this video yelling, "No! Don't!"

These two fellas gingerly slip into the tank as if that's somehow less of a violation.

The finale of this one, with the guy running out the front entrance (because where else do you go?!) holding his wet shorts up will have you kissing your fingers like an Italian chef. It's so good.

Another trend rampant among the young, white male population, otherwise known as the "Never Punished," is to try to hide out in stores overnight for a period of twenty-four hours.

These guys try to take on Bass Pro Shops because the poor store can't get a break.

Whether you're thinking about attempting a fish tank dunk or a twenty-four hour hideout, here's a plea: Pick on someone your own size.

via: The Kansas City Star

Bass Pro Shops doesn't deserve this. That bear is just trying to do his job. Bass Pro Shops employees just want a peaceful outdoor gear shopping experience for all. And the fish especially are minding their own dang business. They don't need your "pranks."