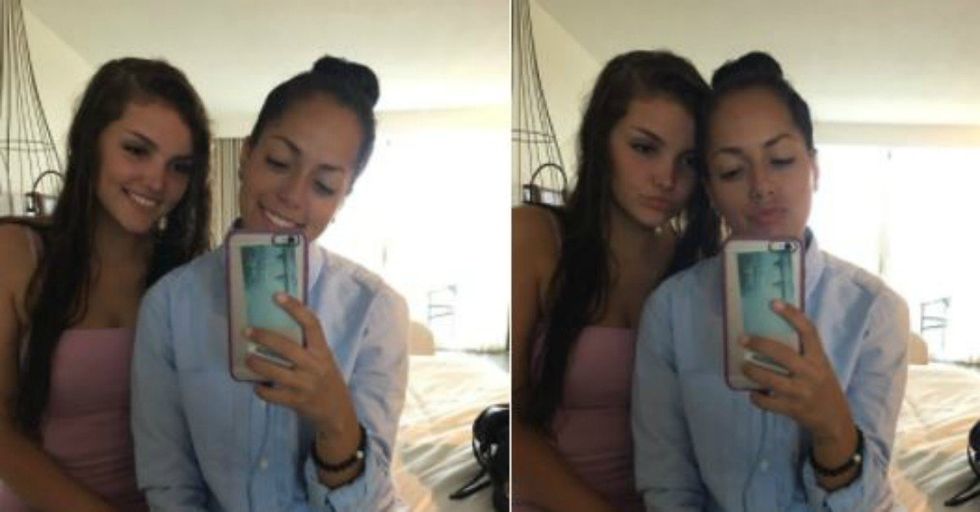 Have you ever seen one of those relationship-themed Twitter accounts? They're usually geared towards younger users (think high school) and tend to include a lot of cute little sayings and GIFs about love that "everyone" can relate to.

Except, in the case of the Twitter account @relationship. They recently stole a pic of a lesbian couple and reposted it after changing one changing one very important detail. In the process, @relationship made sure that everyone knew exactly why these types of accounts can be flat-out insulting and dismissive of certain types of relationships.

The pair, who are 17 and 19 years old, live in Austin, Texas and have been together for just over a year. "Ever since I first met her, I fell in love," Alexa recently told BuzzFeed News. "And I know this girl is the one for me."

Their Twitter accounts are filled with adorable pics of them together.

Yes, this is an entire slideshow that Alexa created as a way of saying "Happy Birthday" to her one and only love. Awww!

So it makes sense that they'd want to further show off their love by getting personalized debit cards.

The two cards have different photos of the couple together on them "so we always think about each other's needs when it comes to spending our money," Alexa said. Such a great idea!

Of course, everyone on the Internet went nuts over these two.

We agree, Snoop Dogg. This is pretty much the cutest sh** we've ever seen as well.

Many users replied, wanting to do the same thing with their significant others.

A few days after posting about the personalized cards, something popped up online that looked oddly familiar — but with a key piece of information changed. Ready for outrage? Keep reading!

And did you notice the glaring error? That's right. They changed the "gf" of the original post to "bf."

Responses like this one quickly began pouring in. It was not only an insulting choice but an odd one, since the photos clearly depict two women.

The gaffe soon went viral, and before long made it back to the original poster.

Alexa told Buzzfeed that it was brought to her attention when someone tagged her in it. The post understandably upset her.

She said that these types of accounts "are so heteronormative and couldn't take into consideration it was two girls."

Heteronormative is defined as "denoting or relating to a world view that promotes heterosexuality as the normal or preferred sexual orientation." Gay and lesbian couples have to deal with heteronormative assumptions like this on a daily basis — it's something that heterosexual couples rarely or never have to contend with.

"I also would've liked the credit that it was my girlfriend and I's idea," Alexa added.

This account has a history of stealing posts without attributing the source. With that in mind, Alexa decided to step in and set the record straight, so people are more aware of that this type of thing is happening.

She posted this clarification on her Twitter account on September 23, and it's already been retweeted 83K times.

She also has a few more words for accounts like @relationship. "[It's] very sad to know people don't consider that there ARE gay couples, and it was obvious it was two girls," she said.

"I would ask the owner of the account why they thought changing it to 'boyfriend' was so important."

"And what did they think they would get out of it?" Although we'd like to know the answer to these questions too, "@relationship" has not responded to requests for comment.