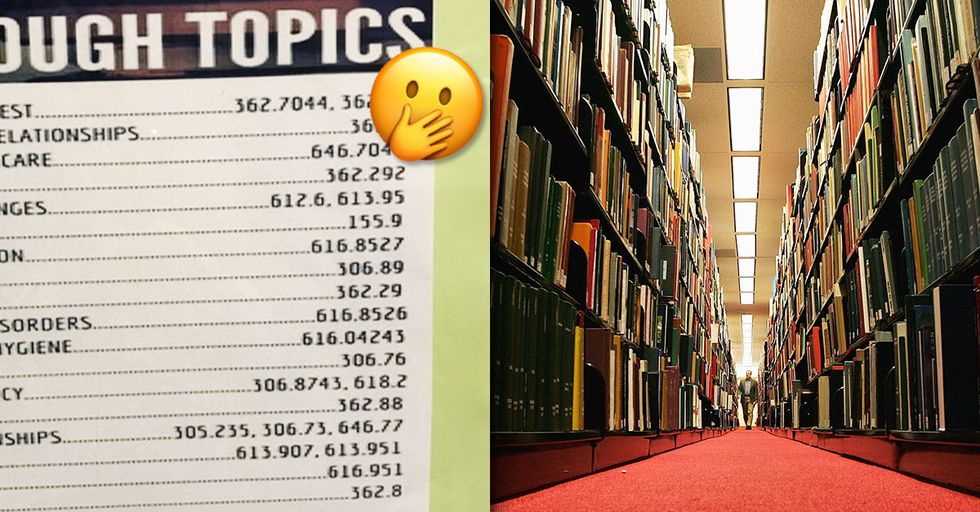 Here's something you probably already know: Libraries are awesome.

What you might not know, however, is just how awesome libraries can be. It goes beyond letting people check out books for free (which is already super amazing!). One library in particular has gone above and beyond in the most incredible way to make sure its patrons are comfortable finding the books and information they need.

If you ask us, they're one of the most amazing places to spend your time. There's nothing quite like walking into a library and knowing you have a few hours to kill in the most pleasant environment ever.

First of all, they're usually filled with books. And books are great!

No matter what you're into, there's a book about it. Books are basically like the internet, except they smell way better. (We're not sure exactly what the internet smells like, but it can't be great, right?)

Plus, librarians are the literal bomb dot com.

We're pretty sure they're some of the closest things we have to angels in this world. Librarians are right up there with nurses, middle school teachers, and people who don't forget to clear the microwave if they take their food out before it's done counting down.

Libraries are open to anyone and everyone, but there are some topics that patrons might not necessarily want to ask librarians about.

Some people are too anxious or embarrassed or otherwise uncomfortable with actually going to a librarian to ask for help finding a book on a certain topic. And that's OK! Because librarians, as we said, are basically angels.

The librarians at this particular library came up with this perfect solution for people who are looking for books on sensitive topics:

They created a directory and posted it in the library so that patrons can consult the poster rather than having to ask a librarian for help (or use a computer). This is obviously an amazing example of librarians going above and beyond to help the people use the library — but it's not the only example!

Some libraries rent out seeds for you to plant in your garden!

The intent is that when you collect your harvest at the end of the season, you'll pay it forward by bringing more seeds back to the library to share with others. What an amazing idea!

And of course, many libraries have computers that are free for the public to use.

People can use the computers to apply for jobs, check their email, or just hang out on the internet and read awesome articles. The fact that this service is usually completely free is yet another sign that humanity is doing OK for itself.

Beyond just checking out books, many libraries also carry movies and video games you can check out.

As a result, more teenagers come into the library, and more books are checked out by the teens who are already there. Not only does it provide kids with a safe space to hang out, it enriches their lives while they're there.

For the eclipse earlier this year, many libraries were giving away free eclipse glasses.

As if that wasn't awesome enough, many of those libraries also collected used eclipse glasses to send to people in South America so they could see the eclipses scheduled to cross their continent.

You can even check out mobile hotspots at some libraries.

They offer unlimited data and are completely free! Does your local library do something awesome the world should know about? We want to hear about it! Let us know in the comments on our Facebook page.