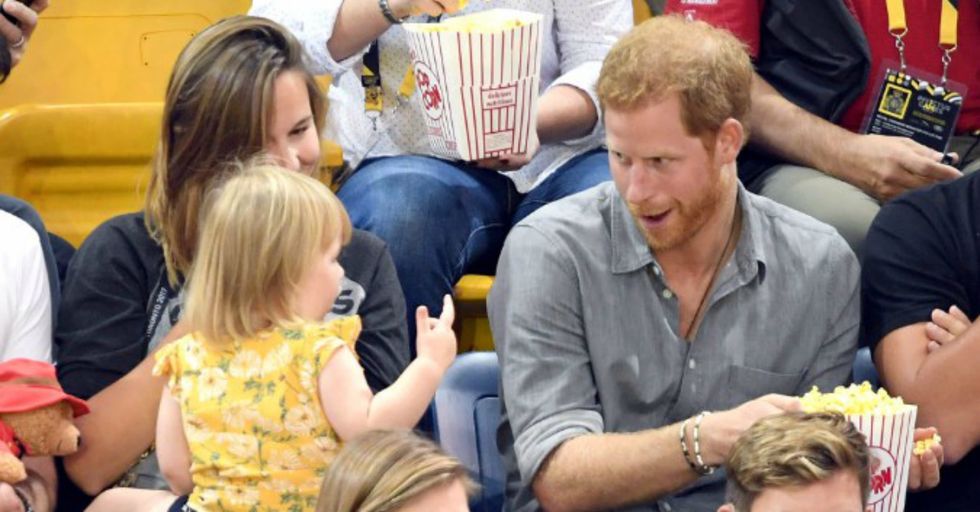 When watching sports, it's very important to pay close attention to the athletes. It's also very important to have an adequate supply of snacks. No one understands this better than little Emily Henson, a toddler who attended this year's Invictus Games with parents Hayley and Dave.

When she saw that popcorn was nearby, she reached out and grabbed some. It just so happened that the popcorn belonged to Prince Harry...

There's an adorable criminal in this photo.

Take a close look at that little girl in the yellow dress. That's Emily Henson, the daughter of British Paralympian Dave Henson and his wife Hayley. During the Seated Volleyball event at this year's Invictus games, Prince Harry sat the Henson family. But while the adults were paying attention to the game, little Emily had other plans.

When Prince Harry ordered popcorn, Emily helped herself to a few pieces.

Honestly, Prince Harry should have been prepared for this. Everyone knows you don't bring food within 3 inches of a child unless you're prepared to share.

It didn't take long for Prince Harry to notice the tiny popcorn pilferer.

He made a move to take the bucket away from Emily... ...But it didn't last long.

He ultimately relented and accepted his role as popcorn provider.

The two continued to bond during the game — Prince Harry even made some funny faces for Emily's enjoyment. Don't mind us; we'll just be right over here, melting.

Here's a video of the exchange between Emily and Prince Harry.

Get ready to awwww. If this is any indication of what Prince Harry will be like if he ever chooses to have kids someday, we can't wait!