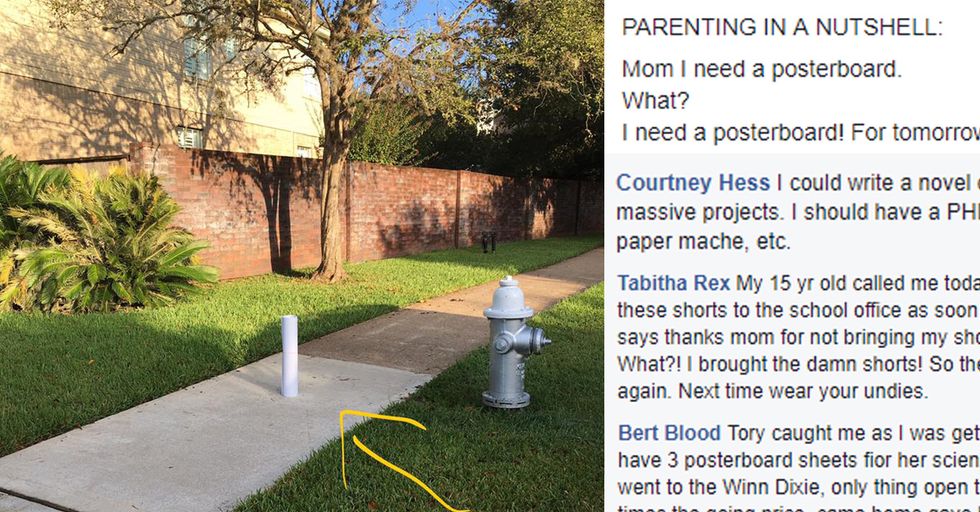 This Lonely Piece Of Poster Board Totally Sums Up Parenting

Imagine you're out on a leisurely stroll in your neighborhood one sunny morning. What would be the worst thing you might encounter on your walk? Would it be an annoying neighbor? The smell of skunk wafting through the air? Catching a dog in the middle of using your lawn as his personal toilet?

If you're a parent, the worst thing you could find might be a rolled up piece of poster board.

Rachel Pavlik, mother of two and writer at RachRiot, started her week in the way all too many parents have — with a 9 PM announcement that her daughter absolutely, positively had to have a sheet of white poster board for school. The next day.

This is a well-known reason that mothers in the wild sometimes eat their young, but Pavlik held it together and not only left the house and bought the poster board, but went to two different stores to find it. That's dedication.

Her daughter was appropriately grateful.

The tears of joy are a nice touch, but do you have any idea what you've put your mama through? You can do better than that!

In a Facebook post, Pavlik recounts reminding her daughter — several times — not to forget this oh-so-vital school supply. "I'm winning at this mom thing," she told herself, and set out for an invigorating walk around the block. As she rounded the corner and her daughter's bus stop came into view, she didn't see a bus. She didn't see any kids. But what did she see?

That's right. After all that fuss, all the trouble and the late-night trip to multiple stores, that poor, lonesome rolled-up poster board was left sitting on the sidewalk. Pavlik wasn't too bothered though, because she knew that there was no way she was saving her kid's forgetful butt by taking the poster board to school and dropping it off. Natural consequences, people!

The next day, Pavlik got a little extra insurance that there wouldn't be a repeat performance.

A selfie with the poster board, ON THE BUS. Success! Well, almost a success, as one astute observer noted...

It would have been a bigger success if it had been, you know, necessary in the first place.

Exactly. Kids. If nothing else, Pavlik certainly isn't alone in her struggle — hundreds of parents chimed in with "AMEN"s and virtual high fives, plus plenty of examples when they'd had similar experiences.

Because kids can be forgetful, and when they do remember something, they tend to procrastinate.

Especially when it comes to homework. It's usually a good idea to read the book sometime before your book report is due. Then again, it's not like most adults have gotten all their receipts and statements organized before they start filing their taxes (on April 14th), so to be fair, kids aren't the only ones who put off unpleasant tasks, no matter how unavoidable they are.

But still, kids have a special knack for it.

As a result, parents have to develop a special knack for whipping up oddball projects out of household objects. Or, you know, a knack for running to the store in their PJs.

That's the worst part — parents are the ones left rushing around to make our kids' forgotten, last-minute plans come together.

That's what this mama tried to do, as she explained on Pavlik's post. She stayed up late helping her son with a report on the Wright brothers that he'd forgotten about until the night before, only to be told he also needs "edible treats that relate to the Wright Brothers." WTF does that even mean?!? She couldn't find any flight-themed cookie cutters at the store, so she had to freehand these...birds? Yeah, they're birds. It's not like parents want to stay up until the wee hours of the morning baking bird-blob cookies, or make midnight runs to the drug store and pay $500 for the glittery pipe cleaners they suddenly need, but we don't want our kids to fail, either. It's a delicate balance...

One that kids then usually completely destroy by continually sabotaging our best efforts.

Help us to help you, kids. So if it's such a prevalent problem that basically every parent can relate, what should we do about it? The moms and dads of Facebook had some surprisingly good suggestions...

The folks who suggested "warming her backside" over some silly school supplies got shut down real quick.

Some felt more strongly about it than others. So what should a parent do?

Other registry suggestions included: folders (“with and without pockets and tri-clasps"), massive boxes of Band Aids (for all those imaginary boo-boos), and 6,979,444,673 glue sticks. Clearly we’ve all been doing baby registries wrong up until now. Of course, any parent can tell you that even if you do stock up on poster board, all you end up doing is guaranteeing that they won't need it after all.

On the bright side, then the parents get to do cool stuff with the extras.

We'd be willing to bet all the money from that garage sale will eventually end up going toward more poster board, though. It's an endless cycle.

This woman's solution from her own mom is just straight up genius.

That seems logical and fair, while still providing kids with what they need for school and helping to set them up for success (assuming they don't forget to take it on the bus the next day). Plus your kid would probably never make that mistake again, especially if you make the extra chore "cleaning toilets."

In the end, Pavlik herself had one of the best solutions of all.

A chapter in What To Expect would be perfect! Move over teething and late-night feedings, dealing with poster board is clearly what parents really need help figuring out.