This Man Got His Penis Stuck in Something Very Odd, Forcing Firefighters to Break Out the Jaws of Life | 22 Words 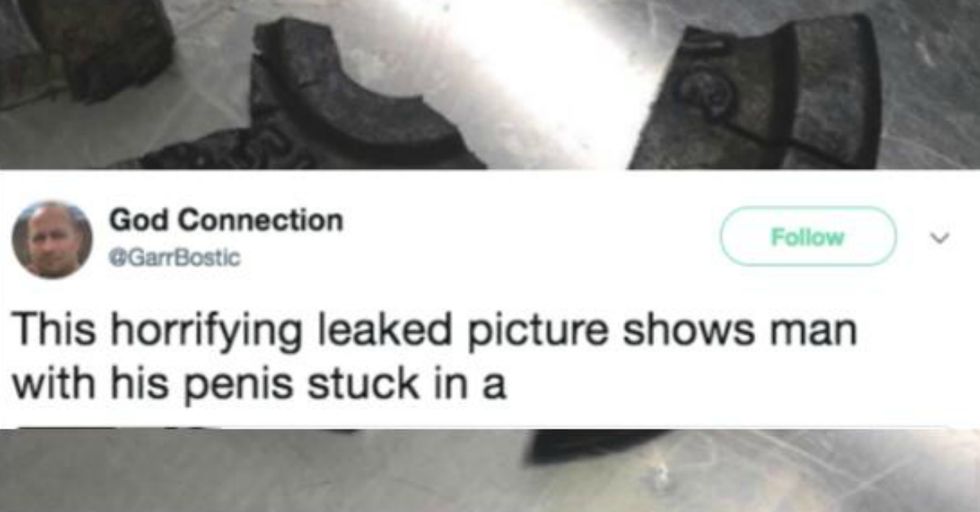 This Man Got His Penis Stuck in Something Very Odd, Forcing Firefighters to Break Out the Jaws of Life

Having a penis must be a challenge, as all men seem to go through a phase of wondering just what it's capable of. One man decided he wanted, maybe, to see how much weight his penis could lift. It didn't go well.

Germany, famous for lots of unpleasant things, is in the news again.

This time because of an incident that happened in a city called Worms. There, a man inserted his, um, "sensitive part of the body" into a weight. According to the local fire department who had to free him, and who then posted about the incident on Facebook.

Apparently it took three hours to free him.

Three hours which we can't imagine getting any less awkward. This definitely isn't why people become firefighters, but it probably makes their happy hours more interesting.

Using, according to the first responders, a power saw and a hydraulic rescue kit. Or what is often known as the jaws of life. For the sake of future car accident victims, let's hope they wiped down the "jaws" afterward.

The fire department had a stern message for other gym-goers.

Its Facebook PSA ended with a plea: "Please do not imitate such actions!" But it sounds much more authoritative in the original German: "Bitte solche Aktionen nicht nachmachen!"

But we just can't let this end here.

There is still so much to unpack about ... everything, just everything. Fortunately, the world (or Twitter) is on the case. Now, let's get to the heavy lifting ... or ... yeah let's just move on.

Firstly, is this a thing?

Like, is there a reason for a man to do this that has any science behind it? Is this something he'd done before? Was this part of his routine? Do some people have pumped up ... nevermind.

If it is a thing, then we have to wonder.

It's not like we all thought the gym was a sanitary place, but we also didn't think this was something we had to worry about. Maybe we should all start wearing gloves?

Do gyms have policies about this?

How would a personal trainer, witnessing this, even approach the situation? While plenty of places have rules about cellphones, we've never seen a posted rule about ... this. And lots of people don't even obey the cellphone one.

We he polite about his dick-ercize or was he a real ... dick? This is key. If he's using it discreetly and cleaning it after, it might not be such a big deal. No wait, immediately we regret saying that. This is a huge deal and no one should do this. Ever.

Maybe this is a genuine need some fitness freaks have. Maybe some gyms need safety protocol for it. But hey, we're fine if for now the safety protocol is just, "don't stick your dick in our weights."

Finally, a question for the rescuers.

This seems much easier than using all the equipment. Though maybe the firefighters don't get to use it as much as they like. Or maybe the situation was too ... meaty? OK, we'll go now. Just hey, don't go sticking your dick in any weights, K? Peace.