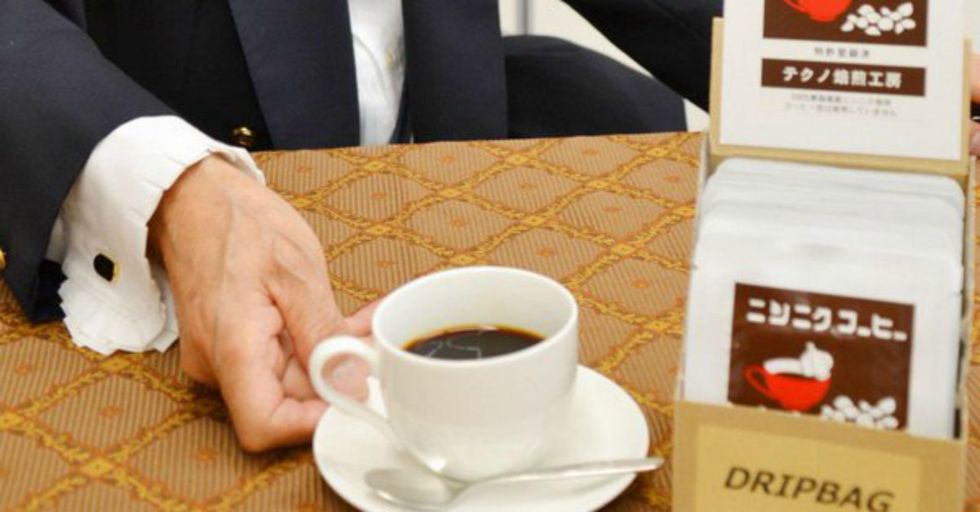 For a lot of us, coffee is basically lifeblood. It wakes us up and gets even the most hectic mornings off to a semi-manageable start. Thankfully, it seems like there are more places to get coffee than there are birds in the sky. The varieties available are also seemingly endless.

Well, here's one more option to add the list.

A Japanese man has been brewing something amazing for adventurous sippers. By harnessing the power of a pungent vegetable and a little ingenuity, he's made an alternative to morning joe that we can't wait to try out.

Oh, coffee, how we love thee. Let us count the ways.

To much of the public, coffee is more than just a drink — it's a friend. It's the kind of best friend that wakes you up, puts you in the right mindset, and whispers, "I know you only got three hours of sleep last night, but today's still going to be amazing. Oh, and you look faaaaaabulous." Even if we don't.

People on the coffee train are proud of it.

Once an individual is indoctrinated into the coffee lifestyle, there's no going back. We put our love for it on T-shirts and signs, and some of us buy pillows on Etsy with the words But first, coffee cross-stitched across the front. Whether it's a plaque proclaiming Everything is better with coffee in the kitchen or an Instagram of an artful latte, we want to tell the rest of humanity about our obsession.

One of the greatest things about our BFF is that it's not in short supply.

No matter how it's procured, the fantastic thing about a cup of hot joe is that it's downright accessible (and in hundreds of different ways). For quite a while, people had to look to the lone coffee pot to fill our morning mugs. And while we'll always love the old percolator, there were newer options on the horizon that have captured our caffeine-loving hearts.

Coffee went high-tech and we followed right along.

With the dawn of the Keurig and its teeny, tiny single-serve cups, the world was could finally whip up personalized java in seconds. No need to brew an entire pot when you're trying to find your shoes and run out the door. Just pop in a pod, and you're sitting in morning rush-hour traffic in no time.

Don't own a coffee maker? No problem.

Even if we don't use a traditional coffee pot or a fancy Keurig at home, that doesn't stop us from enjoying a nice, hot cup of sunshine. Commerce is a beautiful thing. When it comes to cafes on every corner, a coffee pot in every gas station, and about a billion fast-food joints that'll whip up a large cuppa joe for a dollar, we consider ourselves pretty lucky to have so many options.

Along with the numerous places to get it, the boundless varieties of coffee are like a siren song.

With the proliferation of coffee shops came the era of being able to get any size, consistency, and flavor imaginable. Classic black coffee will always be a staple for some, but for the adventurous or extremely discerning, a more complicated order may be just the ticket to a great day. Triple, venti, soy, no-foam, caramel-drizzled latte, anyone?

Coffee enthusiasts now have one more thing to smile about. Options keep expanding.

Coffee variety is one thing, but pioneering an entirely different way to make it is another. Hailing from Japan, a 74-year-old man named Yokitomo Shimotai has invented a brand new system to make an alternative to the hot, delicious drink we all know and love. That's right, he didn't just drink coffee, revolutionized it. And how he does it is amazing.

Need new ideas? Sometimes all it takes is looking no further than your pantry.

As it turns out, garlic isn't just for repelling vampires or adding a bold kick to spaghetti sauce anymore. Shimotai figured out how to process it in such a way that, while it does retain a slight aroma of garlic, it mimics the taste of coffee quite well. A bonus? He claims that it won't leave you with bad breath either. Which is great news for those of us who want to try it without scaring off everyone in sight.

A small accident led to a big idea.

The "coffee" enlightenment came while Shimotai was waiting tables and trying to cook at the same time. He accidentally burned some garlic, but instead of throwing it out, he mashed it, added some hot water, and a brand new concoction was born. After that, he took the lightening strike and ran with it.

Now a patented process, it took a little trial and error to get the drink where it is today. Good news for caffeine-free folks.

Shimotai has dedicated himself to getting the system of "garlic coffee" just right. Sticking to an intricate regimen, the inventor first uses a furnace to roast garlic cloves; then he brews it with hot water. He makes sure it's had proper cooling time before brewing. We all know garlic is good for us, so it sounds extremely healthy — and a great option for those of us who like to burn the midnight oil. Of his drink, Shimotai says, "It contains no caffeine, so it's good for those who would like to drink coffee at night or pregnant women."

Our curiosity is totally piqued.

Shimotai isn't shy about promoting his creation. "My drink is probably the world's first of its kind," he says. But whether the public embraces "garlic coffee" remains to be seen. One thing's for sure, though — we're looking forward to finding out. It's basically the opposite of, say, a caramel mocha, but who knows? Maybe it'll take coffee shops near you by storm.