Mnunchin and his wife got a very unexpected Christmas present Saturday night...a wrapped up gift of horse manure. | 22 Words 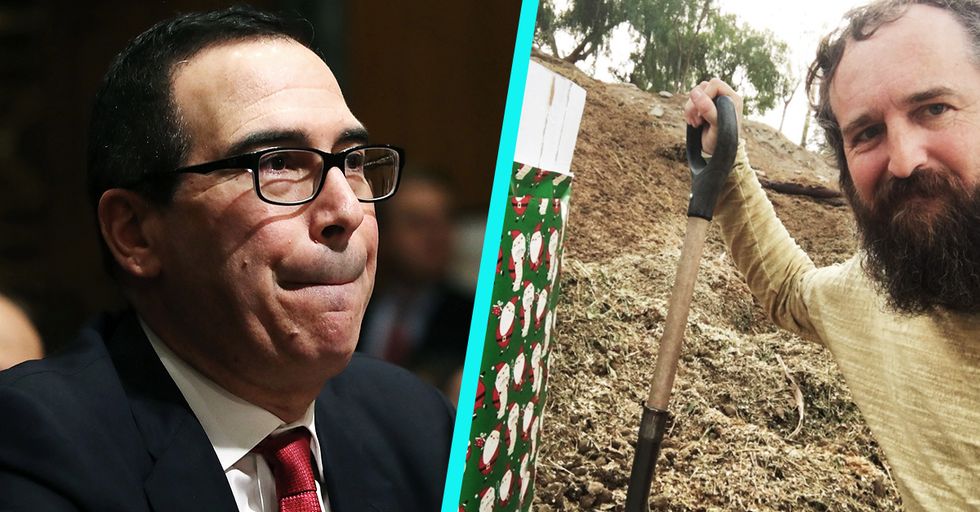 The holidays are a time for gift giving. Usually when you open a present, you might expect a gift card (from a relative who doesn't really know you at all), or maybe that sweater you've been eying all winter. But every so often, you receive a gift that makes you raise your eyebrows so high they nearly disappear into your hair.

Or, you know, if you're in Trump's administration, you get sent a gift that causes the bomb squad to be called in. Happy Holidays?

If you aren't aware of who the US Treasury Secretary is, it's this man named Steven Mnuchin.

He recently helped create President Trump's tax plan which was passed by congress. It's been criticized as favoring corporations as opposed to the American middle class, which is not surprising. This is Donald Trump and his people we're talking about.

Mnuchin is exactly the type of man you would expect to be Trump's Treasury Secretary.

Mnuchin was previously a Hollywood producer and hedge fund manager. He also loves taking trips on military aircrafts that rack up a bill around $800,000. How fun! And definitely someone we want handling our nation's money.

Mnunchin and his wife got a very unexpected Christmas present Saturday night...a wrapped up gift of horse manure.

Of course, it was not what anyone expected.

It was actually a guy named Robert Strong who sent the...ahem...surprise.

According to Strong, he was making a political statement. He came forward as the gift-giver on his Twitter, quoting Hunter S. Thompson, "when the going gets weird, the weird turns pro." What else did Strong tweet?

Because a present simply can't ever be complete with a card, Strong made sure to include one.

The card read: "Mrs. Mnuchin & Trump, we're returning the 'gift' of the Christmas tax bill. It's bullshit. Warmest wishes, The American people. PS-Kiss Donald for me." Wondering if they actually gave Trump that kiss?

Strong doesn't seem to be worried about the consequences of sending manure to Mnuchin.

As BuzzFeed reports, Strong is a psychologist. He works for the LA Department of Mental Health.

He's also very aware that he could get fired.

But he doesn't care, and feels that he did what needed to be done. "What I did, I would like to compare to what Jesus did when he went into the temple and overturned the tables of the moneychangers, who were exploiting the people financially in the name of religion. I feel like that's what the GOP has done to the American people," he told KPCC.

Mnuchin was home when the package arrived.

But it was pretty suspicious, so that's when the bomb squad was called in to investigate. Evidently, the Secret Service is now handling the issue.

As for Strong? He regrets nothing and is waiting to find out whether he'll be fired or arrested.

"In the long run, if we don't do stuff like this, what are we going to have left?" he said.
Keep fighting the good fight, Strong.