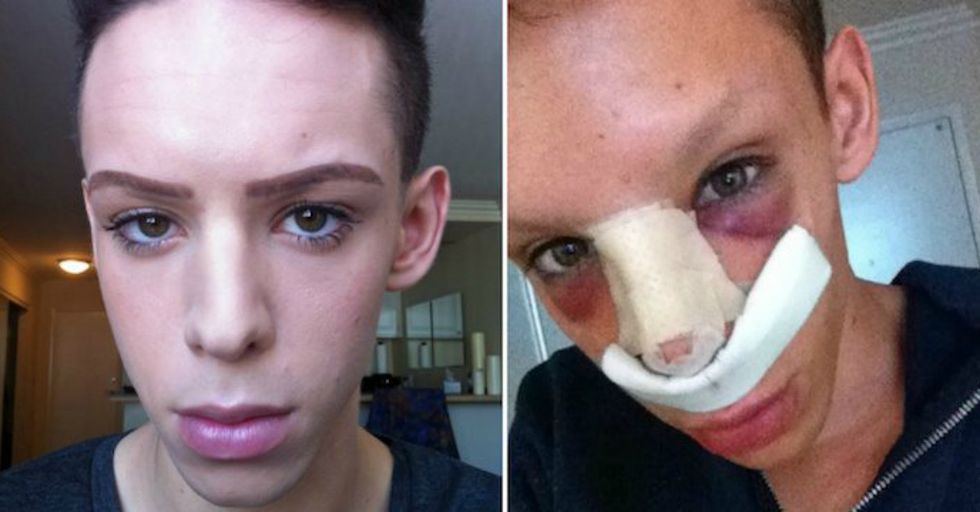 This Man Spent Over $50,000 To Become a ‘Genderless Alien Being’

Body dysmorphia manifests itself in many ways, but underlying it all is the same root cause.

The person suffering feels they don't look how they're "supposed" to.

When it takes hold, the person suffering will go to extreme, dangerous, and compulsive lengths to achieve their ideal body type.

However, the "ideal" is never achieved, so they keep at it, throwing away thousands of dollars on treatments, clothes, and procedures.

Naturally, Barbie is an ideal for millions, if not billions of girls around the world, so many try to emulate her look.

It's a bleak existence, but that's the nature of the disease for those who suffer from it.

Others feel that the concept is dragged out too often.

Such dismissive talk of a person's pursuit of a look is viewed by some as a form of plastic surgery "shaming" that is indicative of the double standard. It's very subjective and very controversial.

However, in the case of one bizarre man, everyone seems to have the same reaction to his strange journey.

That reaction is "WTF?" When you see the man and his current look, you'll almost certainly agree.

This is Vinny Ohh, a twenty-two-year-old makeup artist from sunny California, who has spent nearly $50,000 to become a genderless alien.

Vinny doesn't identify as either male or female and is turning to plastic surgery to help reflect that. He started with lip fillers at the age of seventeen, before having two rhinoplasties, multiple cheeks and brow bone fillers and more.

Now he plans to fork out another $160,000 on surgery to have his genitalia, nipples and bellybutton removed. "The overall image I want to do is an alien," he said. "I want to be a hybrid, not male or female. I’ve wanted to be sexless and genderless since I was seventeen.

He continues to explain his need:

"I’ve been going to doctors to see if it’s possible but had no luck. I don’t want people to think I’m trying to change into a woman. I could live without sexual organs so why should I have a penis or a vagina?"

He started cosmetic procedures after feeling like an outcast while growing up and became an LGBT+ activist, and he feels like his look now represents his beliefs that "people shouldn't be labeled."

"When people ask me how I'd label myself, I tell them an 'extra-terrestrial, hot mess, self-obsessed' it's becoming my slogan," he said. "Over the years, I've realized I'm not gay, bi, trans or any of these things, I just want to be me."

So, here's a picture of an alien, then you can see how Vinny did when you see the next slide.

Of course, an alien form is open to interpretation, but this seems to be a consensus form among entertainment and ET experts.

As you can imagine, he draws a lot of attention when he goes out in public.

"Some people absolutely love me, see me as a celebration and give a lot of compliments," he said. "I don’t look real and people love it. Some people have said they want their kids to be like me and that I’m an inspiration for children who don’t feel like they belong. Other times I’ve had shopping carts chucked at me or I’ve been considered a sexual object by men and woman, I’m used to not fitting in."

Vinny is also booked to appear on a show called The Plastics of Hollywood, where real-life plastic surgery addicts will live together in an attempt to nurture their talents.

“Vinny is an alien new generation of new people who want to look different, in fifteen years, hundreds of people will want to look like them," said The Plastics of Hollywood producer and presenter Marcela Iglesias.

What's Vinny's motivation for going on the show?

“I’m trying to wake people up to show them that gender roles in society do not matter and show them that we need to be better human beings and nicer to one another," Vinny said. “My goal is to change everyone’s mind about human dolls."

But he may have opened people's eyes to the horrors of body dysmorphia, which might be just as useful.

Vinny's not going to ever achieve his dream.

Unless those close to him step in, all we can do is send him our best and learn from his strange journey. But we can hope that he does get better by taking stock of his illness and pursuing happiness through other less dangerous and bizarre means.