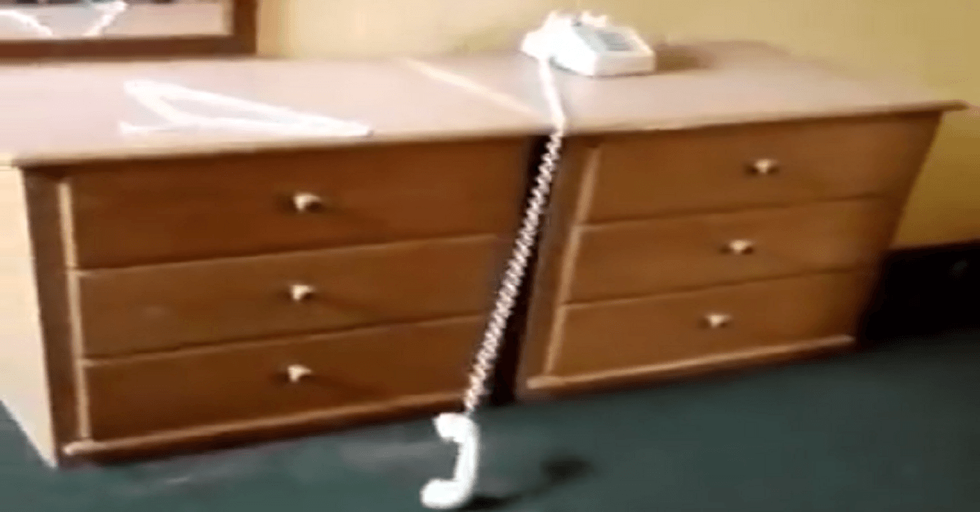 You've probably had to stay in a crappy motel once or twice, and you might have seen some disturbing stuff there, but nothing like what Frank Ramirez experienced when he stayed at a local Texas motel just last week.

It's not gory or anything, but this story might just give you the chills.

Frank was staying at a hotel in Harlingen, Texas when some REALLY strange stuff started to happen.

Ramirez says in the video that, first, a phone fell off its cradle and then a cup fell off the bathroom counter. Those two creepy instances prompted him to fire up his phone's camera and record.

Then, a towel flew off a the kitchen counter toward Frank.

He doesn't even get scared. He just laughs! He must have nerves of steel; I would be terrified if that was happening to me. (But, to be honest, I wouldn't have stuck around that long to begin with, so there's no point in saying what I WOULD or wouldn't have done.)

Frank's video was the subject of a lot of criticism by skeptics, however.

Many wondered why the objects all moved toward Frank in the video, but perhaps the ghost was trying to have some fun with him.

Others accused Ramirez of staging the video by using strings, but the video is far too blurry to see anything.

For every critic there was someone who remained steadfast in their belief of Frank's spooky companion.

To corroborate Frank's story, a Facebook user by the name of Abel Fonseca posted a series of videos showing his own paranormal experience in the same room.

In the series of videos, Abel says the TV turned itself on, shows a towel moving around on the floor, and the toilet flushing itself. That'll freak you out no matter how skeptical you are.

Abel was staying in the exact same room that Frank Ramirez had his experience with the seemingly playful ghost.

Maybe the hotel can turn it into some kind of attraction! People would pay good money for that.

Frank's original video now is up to 7.8 million views on Facebook, leading some to accuse him of simply chasing a viral hit.

And it definitely worked, regardless if that was his original intent. It freaked out tons of people and got them to watch. Hell, it even got us to write an article about it!

Frank posted a final video, attempting to debunk the theory that he was using string to fake the video.

So what do you think? Did Frank have a visitor from the beyond with him in that room, or did he stage the whole thing?