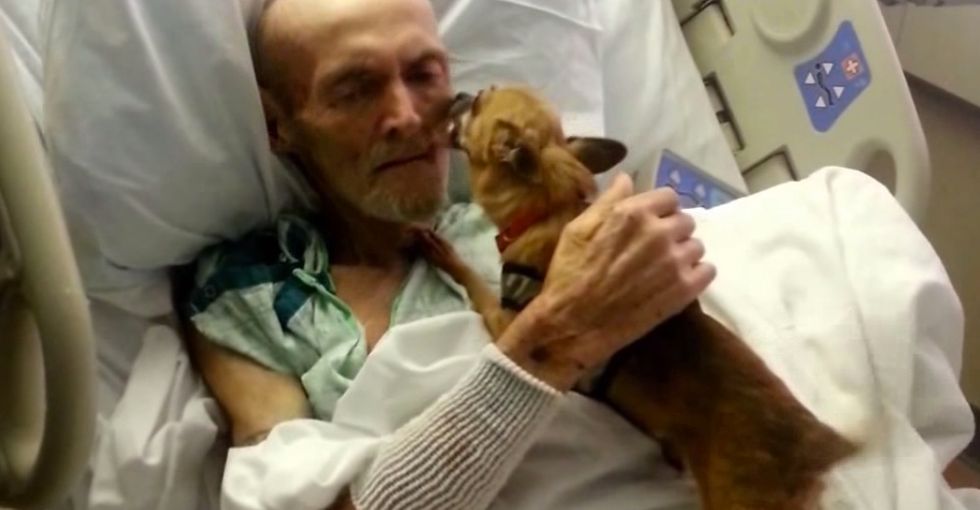 Pets can often feel like a beloved member of the family: we count on their unconditional love and companionship, and in turn, they count on ours.

And for one man in Kentucky, this was especially true recently. 73-year-old James Wathen was so sick and weak that he couldn't eat, or even speak above a whisper. James told his nurses how much he missed his dog, Bubba, and sensing that it might be their final goodbye, the care team conspired to reunite the best friends.

The only problem? The hospital didn't allow for the admission of pets. Undeterred, James' nurses worked in secret with the shelter Bubba had been taken to when James was admitted, and managed to sneak the little pup into the hospital...

Apparently, Bubba had also been doing poorly since he was separated from his best friend. According to the President of the shelter Bubba had been living in, he showed the same symptoms as James...

The dog quit eating a week ago, which is very strange. The dog didn’t know where James was and James didn't know where the dog was and believe it or not, they both stopped eating at about the same time.

Since the reunion, both James and his best friend have made a complete turnaround. And Bubba now has carte blanche to visit James in the hospital whenever he wants.