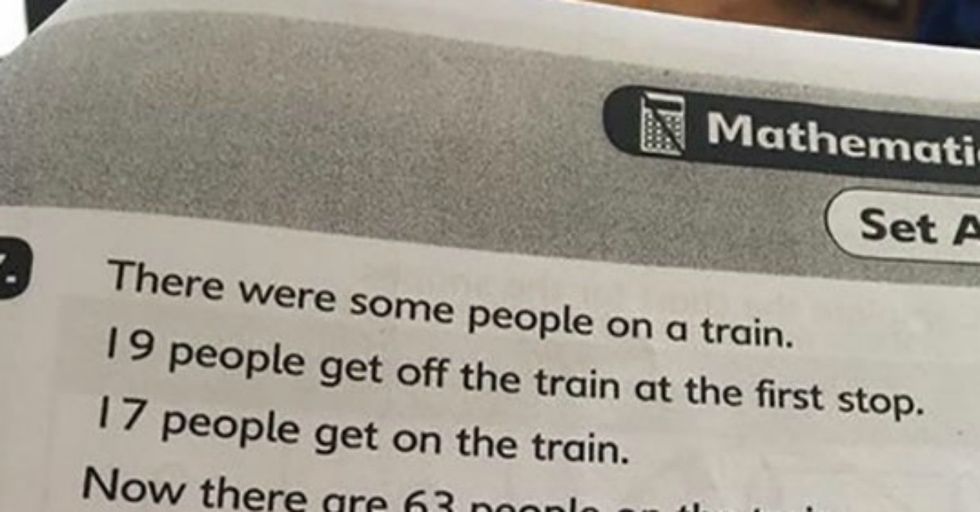 Today's dose of outrage comes in the form of math, which is highly relatable considering how frustrating it can be to do math.

But in this case, it's aimed at a problem meant for second-grade students in the U.K., and its level of difficulty caused quite the stir among parents — many of whom are stumped by the correct answer.

It's not likely you spend your free time doing math problems to unwind.

BUT, that doesn't mean you're immune to the curiosity factor of seeing how your math skills stand up against those of the Internet.

Don't worry, the problem you're going to face isn't anything you need an advanced degree for. It's not like this one.

Anyone CAN do it, whether or not they've got a good math background or not.

Rather, it's just a matter of common sense. Well, mostly.

If you tend to freeze up around numbers, this probably won't be your cup of tea, but the best way to conquer a fear is immersion, right?

That said, it WILL require brainpower, so put on your thinking hat.

Whatever your "thinking hat" might be, and let's get to solving this problem that has so many fully-grown adults fumbling for the answer.

Got your hat on? Great. Let's get going.

Remember, there's a lot here that's not important, so try to focus on the RIGHT thing. I won't say any more without giving something away, so I'll zip it.

Louise Bloxham first shared a picture of the question on Twitter, almost immediately sparking discussion and debate on the topic of standardizing testing.

The question asks: "There were some people on a train. 19 people get off the train at the first stop. 17 people get on the train. Now there are 63 people on the train. How many people were on the train to begin with?" The photo was shared on Facebook and Twitter, and some parents argued that they could only just work it out themselves, let alone their children.

Others argued the question was “ambiguous" and a “trick" for children taking a test.

While others thought parents were being ridiculous about it.

Is this too hard for second graders?