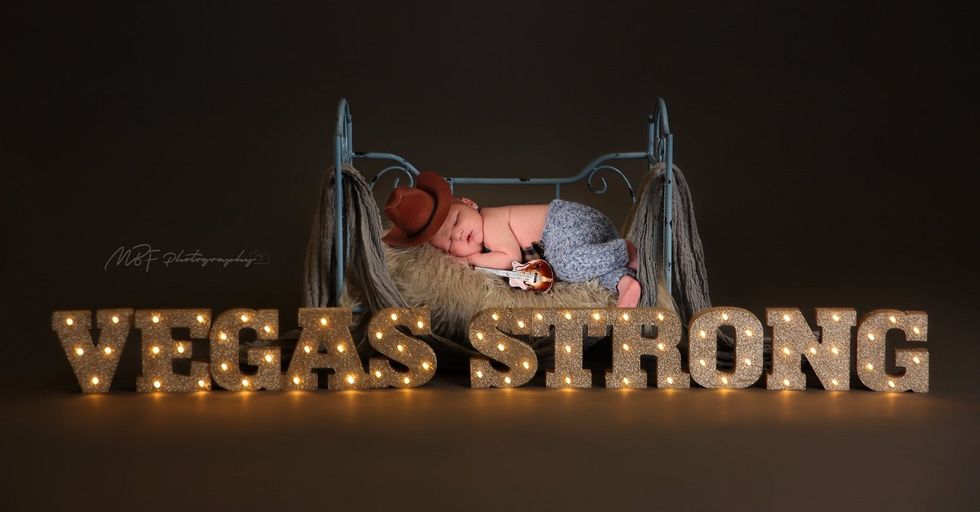 A local Las Vegas couple attended the Route 91 Festival in Las Vegas for one last night out before their baby was born. Unfortunately the night became memorable for all the wrong reasons, as they then found themselves fleeing the deadliest mass shooting in American history. Luckily, they escaped, and their son was born healthy just two days after the tragedy.

It was the country music festival that became a war zone.

It left 58 people dead and over 500 injured, making it the deadliest mass shooting carried out by a single gunman in U.S. history. Las Vegas, a city known for fun and escapism, has been reeling from the tragedy every since.

Tributes have been pouring in for the lives lost.

Tributes to those who lost their lives in the tragedy are popping up all over the city and the country. Meanwhile, fundraisers have also raised thousands for those affected by the violence.

Visitors have made sure to pay their respects as well.

As these St. Louis Blues fans arrived for the game against the Vegas Golden Knights, they were photographed, having added the Vegas Strong hashtag to their jerseys. It's a message of unity for a city torn apart by carnage.

The shooting targeted a country music festival, making the loss feel especially poignant for the industry's artists. Last week, country stars Big & Rich headlined a benefit concert for those affected by the violence.

Some have been a little skeptical of a few of the tributes.

"Vegas Strong" merchandise is also being produced and sold, which has been raising a few eyebrows as people wonder just who might be pocketing that cash. Hopefully the majority of it is going to support the victims and their families. However, there's one tribute we can decisively say is not a money grab, considering it was already in the making nine months before the tragedy.

Markie Coffer and her boyfriend Travis Matheson had decided to attend the concert even though her baby was already a week overdue.

"We decided, ‘Oh, we’ll go. Maybe it will help (my baby) come out’ and we were just there having fun," the new mom told Fox 5 Vegas. They were having a great time along with Matheson's brother when the chaos broke out.

Luckily, Matheson a U.S. Army veteran, was able to help the group to crawl to safety.

During the escape, Matheson's brother Cody was shot in the shoulder by one of the gunman's bullets. But they eventually made it to safety, and were driven by one of Cody's friends to a local hospital, where doctors and nurses were frantically working to save the wounded.

"He's been unique since the beginning," Coffer told the news outlet about her new son, who they named Wyatt. Both parents were so relieved that their baby was not only healthy, but also that he was welcomed into the world by two healthy parents, too.

Then, a local Las Vegas photographer spotted their story on the news.

Shiran Mariasov of MBF Photography was so moved by the story of the baby born so soon after the tragedy, she offered a free photoshoot for the newborn. The resulting images are among the most powerful to emerge in the aftermath of the tragedy.

The photos have served as a moving declaration of hope in the face of tragedy.

"He is our Vegas Strong baby." MBF posted to its Facebook page. Wyatt's parents agree. His dad even described him to their local news outlet as "a light at the end of the tunnel." The photos show that Wyatt is definitely a ray of light. If you want to see even more of the newborn, there's even a video.

MBF posted an adorable behind-the-scenes video of the photoshoot.

Though Wyatt seems delightfully oblivious to the world he's been born into, his utter cuteness has been a silver lining in one of the darkest clouds hanging over this country at the moment. Frankly, we hope there's a follow up toddler shoot!