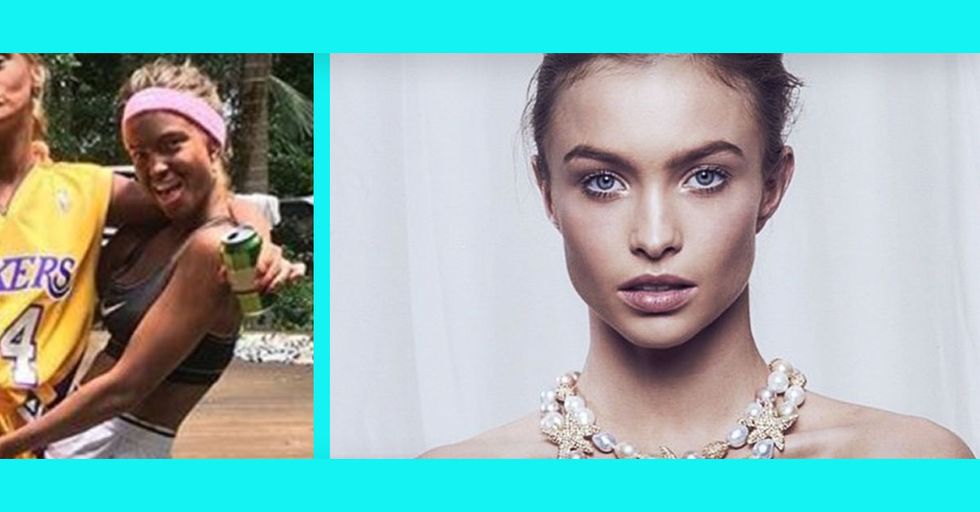 Hey, here's another reminder for anyone who has SOMEHOW managed to miss the memo: Blackface is never OK. Ever. It's never funny, and it's never not racist. There is no situation in which wearing blackface is acceptable or excusable. It's nearly 2018. We shouldn't have to remind people about this.

People keep doing it! Not only that, but they're still uploading pictures of themselves in blackface to social media and trying to defend their actions. How does this happen?

The woman pictured here is an Australian model named Sophie Applegarth. She is (or at least was represented by Chic Management.

You may not have heard of her. But that's fine. After her actions of this week, she's made it clear that she's not a person worth knowing about.

That's because Sophie — along with a couple of her friends — decided to don blackface in order to look more like Serena and Venus Williams.

Sophie and her friends posted several images of their awful, racist looks on social media.

Because if you're going to be racist, why not do it on a giant platform! The better to offend people, right?

One of Sophie's friends dressed up as LeBron James.

And yes their look included blackface, too. This is insane and completely vile.

Why did they make this appalling decision? Glad you asked.

Apparently, Sophie Applegarth and her friends attended a sports-stars-themed pool party and figured their costumes necessitated that they wear blackface. (Which, again, is not ok. We don't need to keep explaining that, right?) When they were confronted about their actions, they had a very mature and thoughtful* response... (*Spoiler alert: their response was neither mature nor thoughtful.)

Lovely! Their response to valid criticism to their offensive actions was to — wait for it — be even more offensive. Brilliant.

Obviously, most of the Internet called their behavior out for what it was: disgusting and racist.

@laureningram @Chic_Management Can't believe A) people think this is still okay, B) they would post it on social me… https://t.co/NlOacOFtwk
— Luke Bartolo (@Luke Bartolo)1514539257.0

Applegarth has since gone off the Internet grid, making her Instagram account private. Before going media dark, though, she offered this "apology": "Disclaimer — I had no 'racist' or malicious intent by the photos I just uploaded. We were praising our fav sports stars Serena and Venus Williams. Did not mean to offend."

Ohhhhhhhh. We get it. They were "praising" Serena and Venus Williams. By being racist.

Applegarth's "apology" is almost as bad as wearing blackface in the first place. She's not apologizing for her racist actions; she's telling people they're wrong for calling her racist. A real class act, that Sophie Applegarth.

If only there was a way to show appreciation for black athletes without being racist...

How did this Aussie lass (Sophie Applegarth) and her band of merry little friends think this get-up was a complimen… https://t.co/JuQHPoO41u
— Victoria Uwonkunda (@Victoria Uwonkunda)1514569984.0

Oh, wait. There are. There are a lot of ways to do that, actually. Apparently, it wasn't worth the effort to Applegarth to think of any of them.

OK. One more time for the people in the back: Do. Not. Wear. Blackface.

It is never funny, and it is never OK. Let's hope 2018 brings an end to these kinds of discussions for good.