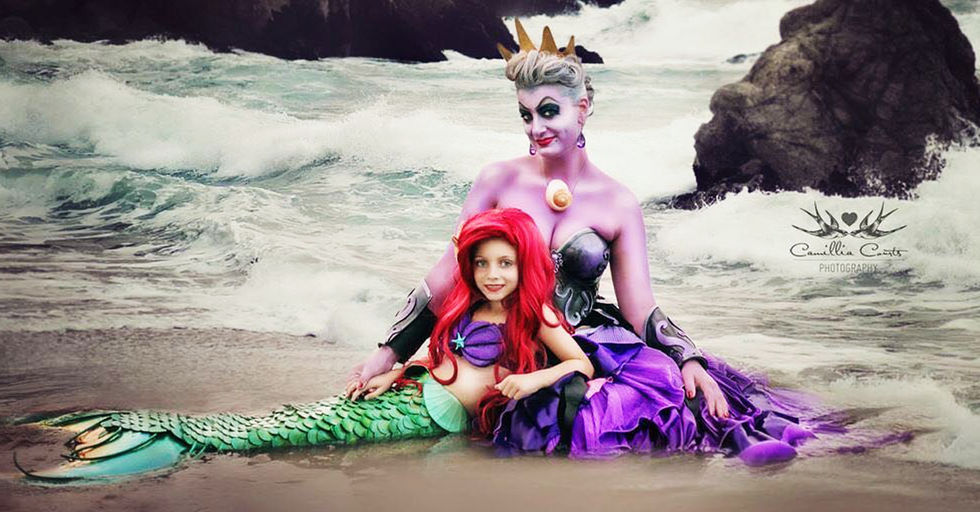 This Mom and Daughter Are SLAYING Disney Dress-Up On Instagram

Almost every kid on Earth has gone through a dress-up phase, but very few of them are lucky enough to have a mom who not only joins in, but takes it from a just a phase to full-on Internet awesomeness.

That's the dream seven-year-old Layla is living with her mom, photographer Camilla Courts, via their unbelievably magical Instagram account.

Courts shares their snaps on Disney Inspired Photo, where over 50,000 followers are treated to adorable daily doses of Disney princess magic.

It started three years ago, with a quick photo of Layla in a fancy dress they bought at Disneyland. People loved it so much, she decided to take a few more princess pics.

What girl wouldn't swoon to be the subject of all these fairy tale settings, complete with costumes, character-specific wigs, and little woodland creature buddies?

Well it turns out, Layla loves it even more when her mom gets in the scene with her! "My daughter LOVES when I’m in the photos," Courts told Scary Mommy. She first joined in the dress-up fun on a lark for a special mother/daughter costume.

As you'll see in their account, the entire feed is dedicated to pics of the two in full-costume.

There are no candid photos of the two of them. It's understandable that with all the hoopla surrounding these pics, they'd want to keep their real lives out of the public eye.

"We had done about eight princesses and it was Halloween so I thought I’d dress as The Evil Queen," she explained.

"And that was when I realized that people like to see us together!" Of course they do — what's not to love about seeing your favorite Disney classic families come to life?!?

These days, in addition to plenty of pics of Layla's amazingly diverse depictions of Disney princesses...

...from Snow White to Elsa and everyone in between... The list keeps going and is quite impressive!

...Mom has a growing collection of Disney villain personas to match!

You might run into one of the Seven Dwarfs at any moment! Check out some of these incredible pairings; you can't help feeling like you've just entered the Deepest Woods or climbed right into Rapunzel's tower.

In fact, one of her characters even got the meme treatment, signifying that she's really made it!

It's no wonder they picked Ms. DeVille. It's her most popular one based on Instagram's engagement.

Can you even imagine?

As if the costumes and props aren't fantastic enough, Courts points out in the caption, "Spending time together is what makes it so fun!" Quality time at its finest.

If you think that's impressive, they even went underwater for a deep-sea Finding Dory photo sesh.

Again, while the settings are spot-on and the costumes are gorgeous, it's really about Courts and her little girl sharing a passion. "This session was soooo fun and we made some great family memories," she said, reiterating that the joy in their cosplay comes mainly from the bonds they're building.

At some point almost every parent thinks of their daughter as a little princess, at least while they're little and still want to wear tiaras and Disney ballgowns.

But Courts and Layla prove that there's no age limit for using your imagination, and that the best part of being the Belle of the ball is who you're there with. Especially if that person is your mom.

And especially if your mom happens to have an ability to whip up photography fairy tale magic.

Of course, as perfect as Layla might be in the role of princess, we have to say that Courts makes a pretty spectacular villain in her own right.

After all, who better than a mother to play the part of the wicked bad guy? Take Ursula, for example, arch nemesis of Ariel in The Little Mermaid. "I love being Ursula," Courts says. "She's so glamorous and evil — just like me." Yup, I can relate. Between time outs and bedtime meltdowns, I have the evil part nailed. Now I just need some costumes (and serious Photoshoppping) to nail that glam part.

Where do the two go from here?

Well, they've got quite a few more Disney characters at their disposal — it's a big universe out there. They show no signs of stopping yet, so perhaps it's just a question of when Layla feels like she's too old for this. Because it's clear that mom Camila is still going strong and having a ball!

From the looks of it, Layla's not showing any sign of stopping in the near future, either.

I mean, this isn't a montage photo of someone who's gonna give up the game anytime soon, now is it?

Of all the ways to bond, this mom and daughter found one that is truly, actually, timeless.