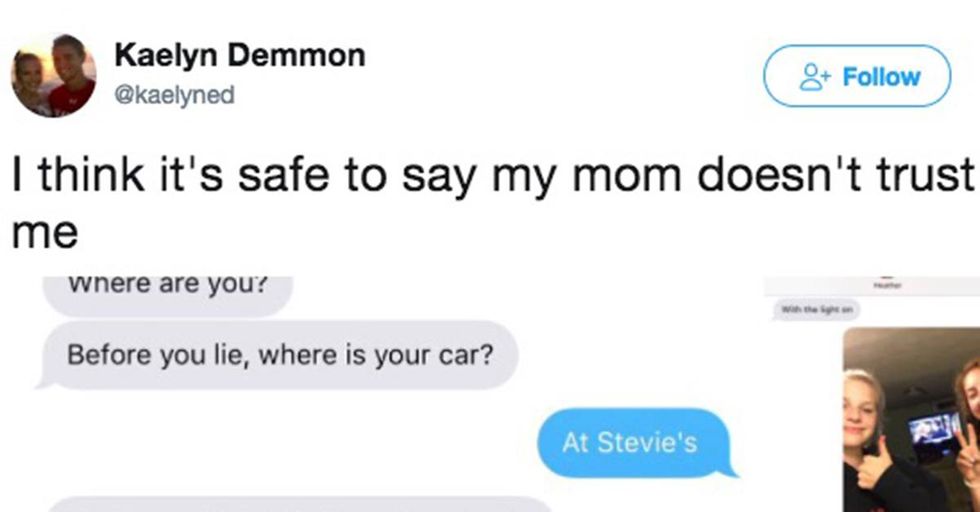 Being a parent in 2017, just like in any other era, has its pros and cons. Technology can make it easy to keep tabs on your kids, but can also get them into trouble.

One brilliant mom has found a way to use her daughter's phone as a clever way of making sure she's telling the truth.

See how she does it below!

Kaelyn is not too different from your average teenager, except for one quirk.

And really, the quirk has more to do with her mom, Heather Steinkopf.

On the surface, Heather and Kaelyn look like the average, happy mother-daughter pair.

But like any mother, Heather naturally gets a bit worried when her teenage daughter goes out.

So, what does Heather ask Kaelyn to do to ease her mind?

It's bit a overbearing, but a bit brilliant at the same time.

It also works well because Kaelyn is clearly not afraid or timid when it comes to getting her picture taken.

Parents...take note. You'll want to employ this one when your kids are old enough to get around without your help!

They might find it a bit burdensome initially, but they'll love you for it when they're older. Much older. Here it is...

It seems obvious once you hear it, but we haven't heard of many parents doing this.

She makes her daughter fire back a selfie of who she's with and what she's up to at that moment, making sure it jives with the story she gave her mom before she left!

She asks for the thumbs up to make sure Kaelyn isn't just sending any old random selfie. But the interrogation and mind games go even deeper than that.

Heather wants a selfie with the light on too!

Just in case Kaelyn had a picture of her and her friend giving the thumbs up in the dark already, for some reason.

This is probably a good time to point out that Kaelyn's mom just seems to be having some fun with her daughter, and Kaelyn doesn't seem too bothered.

But that doesn't stop Heather from demanding one final photo.

Her original tweet blew up, and people had a lot of feelings about her mom's unorthodox parenting technique. See if they're with her or against her!

Heather says that she doesn't always ask her daughter for a selfie, so she never knows when she's gonna get a request.

Brilliant. Only a mom who was a really bad teen would think to add that little flourish.

Kids aren't thrilled that this tactic is making the rounds, but parents could use it to ensure their kids are honest.

And, just as importantly, making sure they're safe. But that didn't stop people from complaining.

Some felt that her mom was being way too harsh.

But it seems like her mom was just having a little fun with her daughter and didn't think she was actually lying. Kaelyn and her friend look like they're having some fun with it in their selfies too.

Of course, when a parent gets in this habit...it can be hard to quit it.

But, there are worst things in the world than having protective parents...even if taking random selfies to appease them can feel like a bit much.

Another parent tried Heather's technique, and it didn't work out quite as well for her.

Although it was just as hilarious.

So while we might like our phones (or even NEED them), older generations weren't as tethered to their parents.

For better or worse. Every era of technology has its blessings and curses. It just depends on your perspective!

Of course, technology will NEVER keep a concerned parent from doing what they will to check in on a teenager.

One day, you'll appreciate it, but as a teen, it's...just the worst.