This Mom Couldn’t Stand One More Day of Positioning Her Elf on the Shelf, so She Did Something Genius | 22 Words 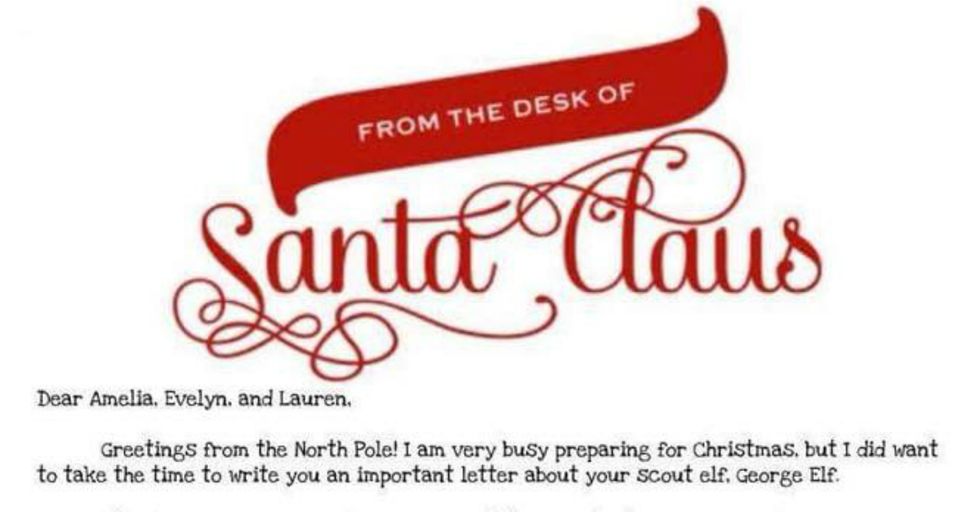 This Mom Couldn’t Stand One More Day of Positioning Her Elf on the Shelf, so She Did Something Genius

Being a mom is hard enough as it is, especially around the holidays. You're making plans, saving up to buy presents, working hard to make lasting, memorable traditions for your family...

And now, you also have to invent a new, brilliant tableau for your Elf on the Shelf every night after your children go to bed. We're not going to lie, the Elf is a divisive figure. Either you love him or you hate him. Or your children love him, and he is the living bane of your existence.

And that's where our story begins, when one exhausted mom took matters into her own hands...

The holiday of Christmas is chock-full of traditions. Most of which have absolutely nothing to do with Jesus Christ himself.

What initially started as a children’s picture book, written by Carol Aebersold and her daughter Chanda Bell, soon turned into a feat of commercial brilliance, and the bane of every parents’ existence.

The Elf on the Shelf, for the gloriously unaware, goes a little something like this:

You buy the overpriced book and "Scout Elf" at select retailers. The Elf, so the fabricated tale goes, has been sent by Santa to spy on children, and is responsible for reporting back on them. Each night, it flies to the North Pole to download Santa on the dirt, and returns in a different spot each morning to lurk again. Simple enough. But remember: the Elf is an inanimate object. Which means that the parents have to move the creepy doll from place to place each night, perpetuating the charade that the Elf has "returned." According to the website, "children love to wake up and race around the house looking for their Scout Elf each morning."

And this happens Every. Damn. Day.

It’s hard enough for parents to maintain the (**spoiler alert**) charade that Santa is real. Add yet another tradition to the mix, that of glorified hide-and-seek overlord, and it's enough to make anyone want to scream. Except, it seems, for the growing counterculture of "overachieving elf mommies."

But one momma knows what’s up.

In a December 3 Facebook post, Christy Heins wrote a full-on letter to her children, effectively retiring their elf “George" at the behest of Santa. Turns out, she didn’t want to deal with the unnecessary stress of moving the goddamned thing around anymore. But she also didn't want to break her kids’ hearts. So she had to get creative...

In the letter, Santa explains his reasons for the abrupt retirement, yet one can't help but note the thinly-veiled admission that this whole thing is dumb.

When your mommy and daddy were little, they didn’t have scout elves like George Elf. A few years ago, I had a great idea and wanted to try using scout elves to help me decide who is on the Nice List and who is on the Naughty List each year...some scout elves LOVE their jobs and want to keep flying back and forth each night. But just like people, each elf is different. George Elf wanted more than anything to be played with like a real toy.

AKA George hated his job.

In a statement to Babble, Heins explained, “It was important to us that we didn’t ruin the magic for our kids, and we especially didn’t want to ruin it for other families that really enjoy the elf."

"But we knew that if we wanted the Christmas season to be about joy and peace, then we needed to get the elf ordeal off of our plates." At the end of her letter, Heins left her children with a poignant reminder of what Christmas is supposed to be about:

Please use this Advent season to prepare for the celebration of Jesus being born and always, always treat others the way Jesus would want you to treat them. That’s what Christmas is all about!

At least someone gets it.

People have some STRONG opinions about the Elf on a Shelf trend.

I thought I was having a bad morning & then remembered that some people have to wake up with that Elf on the Shelf.
— Sarcastic Mommy (@Sarcastic Mommy)1512318352.0

This woman is just relieved she doesn't have to deal with it at all.

There's also this mom who is straight up NOT HERE for an dry Christmas.

Listen, we don't blame her. That elf better be a master cocktail mixologist or we're not coming.

Lastly, we have this little gem.

This lady's elf needs that college money, baby. No matter what your Elf style is, we wish you the best this holiday season!