After a smooth first pregnancy, her second was a struggle and she was left in "complete and utter despair" over her body. | 22 Words 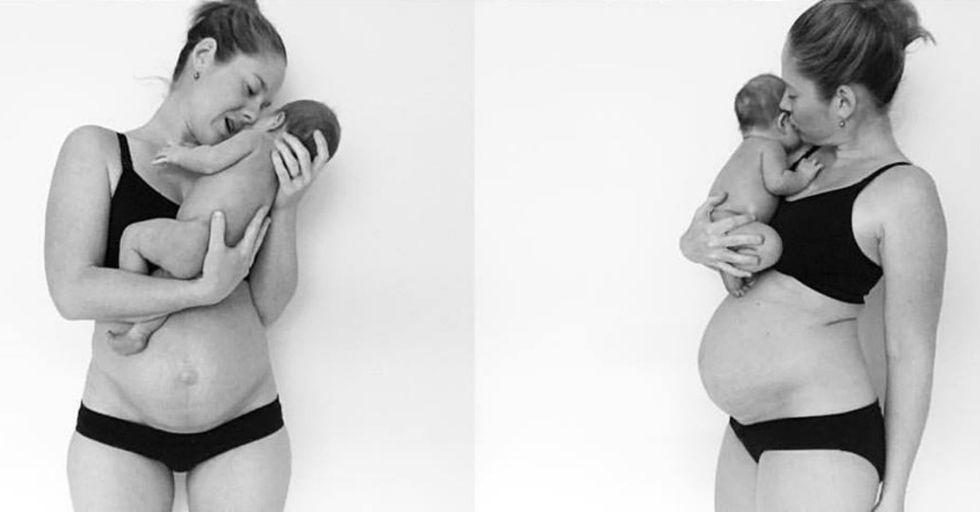 This Mom Defiantly Shows Off Her 'Real' Postpartum Body

Having a baby is no walk in the park.

Yes, the end result is a tiny miracle that will change your life forever, but it also changes you emotionally and especially physically in ways you might never imagine.

Thirty-two-year-old Kirsty McKenzie has been through the process three times, with each experience way different than the last. She remembers looking "six months pregnant" a full six weeks after her second baby was delivered.

"It wasn't so much vanity as finding it difficult to deal with change," McKenzie said.

After a smooth first pregnancy, her second was a struggle and she was left in "complete and utter despair" over her body.

"Physically and mentally, my second pregnancy pushed me to the limits of my body's capabilities," she said. Adding to that frustration was the way people use the word "real" across social media, particularly in regard to physical appearance. To her, her postpartum bod was just as "real" as any other person's, and she didn't want to hide it just because it didn't match societal expectations.

She wrote: "I really dislike the way the word 'real' is used in this world of social media... ESPECIALLY when it comes to the subject of body image, or perception. Almost every time it's used, it leaves the rest of us open to the feeling that our bodies, or our journeys are somehow less than others'. That because our bodies don't look like someone else's version of 'real', that we're not doing it right, we either haven't struggled enough, or we should be doing it better (it goes both ways)."

"My body is no less 'real' than anyone else's."

"So here I am, third time around at 4 weeks postpartum."

"My recovery is slow, slower than it has been the last two times... and that's ok. Each of my own pregnancies and recoveries has been different, I can't compare them, because the way in which I found myself at this point has been entirely different... and if I can't even compare my own three experiences, then how can I compare mine with someone else's?"

She went on to say:

"Four weeks postpartum this time for me means, rounded and soft squishy tummy, lots of bruising still (both internal and external), an abdominal separation (which I haven't had properly checked because of the internal bruising), and a brand new scar marking Hannah's grand entrance into this world. Most days I feel like I'm just a milk machine, my body still really belongs to her, and the thought of getting back into it (exercise) is still well beyond me." And then went on to sum things up...

"At this point, almost every aspect of me has been changed again, changed permanently. And the best thing is, this time around, quite frankly, I couldn't care less."

She added that, "For other women who are struggling with being pregnant, I would say your body will not look the same afterwards, but it's not meant to look the same. I'm not worried about looking good in a bikini anymore. Remember you made a life; your body didn't change for nothing." It's a good reminder that you shouldn't compare yourself to anyone — including her. Everyone’s experience is different, and there's nothing more "real" than the perfect little bundle of joy that you brought into the world.